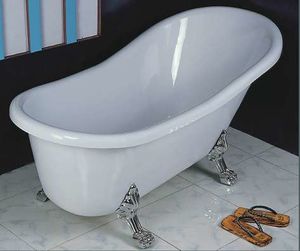 The Bathtub, as seen in 2006, photographed from above by helicopter survey. Note the intriguing twin habilimental formations at the lower right.

The Bathtub is a small body of water located on the west side of Condominiumland, which is accessible through the Hallway Passage.

The Bathtub has a surface area of 0.00000033 square miles (0.00000085 km2) and a maximum depth of 0.9 ft (0.27 meters). It is fed by one main tributary, which periodically raises water levels to within 0.1 feet of the edge of the basinal structure. The waters of the Bathtub have also occasionally spilled over the edges, causing extreme hydrological damages to the surrounding areas.

Tides in the Bathtub are almost undetectable because of its small size, but still exist and can be accessed for running small power plants. During drainage seasons, violent whirlpools may spontaneously form whose direction of rotation is strongly influenced by ambient Coriolis forces.

The waters of the Bathtub contain relatively low quantities of dissolved salts. However, they are much higher in concentration than the other oceans in dirt, mud, animal hairs, dead leaves, rambunctious children, food crumbs and boogers.

The temperature in the open waters can sometimes reach those of the better Hot Springs or the large inland Hot Tubs. Cooling occurs when the air pressure and heat evaporation combine to balance the temperature of the standing water with the surrounding landscape. 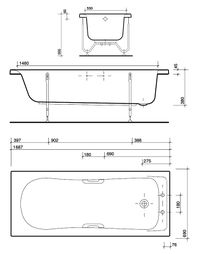 A rough theoretical diagram of the Bathtub, circa 1803, by Meriwether Louis

Careful analysis of the thousands of ring-shaped deposits on the steeply-sloping sides of the Bathtub indicate many separate periods of inundation, interspersed by drainage events over the course of the past several million years. Exploration of the bottom of the Bathtub by deep-sea divers has revealed a relatively smooth surface, which is occasionally interrupted by multicolored adhesions similar in appearance to coral reefs. Also near the bottom is a circular aperture, which is believed responsible for occasional whirlpool activity (mentioned above).

The Bathtub contains several large floating continents composed of a low-density foam-like substance. Computer simulations of the history of the movements, collisions, and breakup of these continents are indicatative of the presence of deep underwater currents. What causes these currents is presently unknown, but are currently hypothesized to be due to the unpredictable movements of a naked organic creature with a hyperactive bowel.

The Bathtub is home to a great number of indigenous aquatic species, such as the sponge, the rubber ducky, the purple octopus with three googly eyes, bacteria, and, of course, 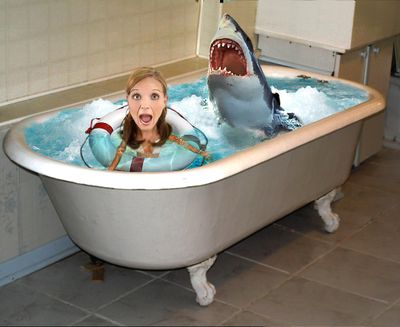 Maritime traffic on the Bathtub is extensive during the summer months. Ships regularly haul dozens of tiny plastiform passengers from one edge of the Bathtub to the other whislt going "Tooot toot tooOOT!!! Oh noes! look, the big red boat crashed against the purple octopus! Help, we're SINKING (glub glub glub)!" Unfortunately, catastrophic accidents are all too frequent, mostly due to navigational error. 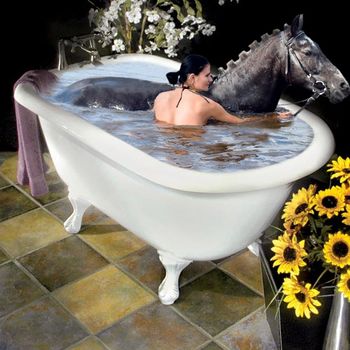 The displacement of water ascertained by submerging non-oceanic bodies into the miniscule sea can be calculated to the square drop.

In recent years, the sensitive environment of the Bathtub has been ominously threatened by various chemical pollutants, such as harsh detergents, multicolored paint spills, Mister Bubble, and unidentified gaseous anomalies. The innumerable shipwrecks which litter the bottom of the Bathtub also pose an unwarranted hazard to the indigenous wildlife.

Since the costs of restoring the Bathtub to its pristine unpolluted state are estimated to be incalculable, focus has been shifted instead to prevention of future degradation by banning the wholesale introduction of foodstuffs, electrically-powered machines, and large canine companions.

Teams of divers and bathers have entered the waters of Bathtub, and have reported slippery sides and sometimes stray hairs of unknown origin.

Film director James Cameron is the only person to have driven a deep-sea vehicle into the bowels of the pipe which satellite X-ray technology discovered at the bottom of the Bathtub in 1978. Cameron floated down the pipe in his one-man bubble-shaped machine a few months ago, and is expected back any day now.