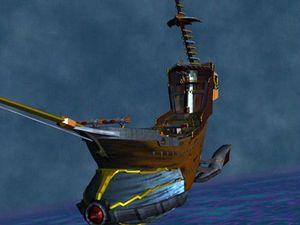 Yar, gather 'round ye feckless lubbers, and I'll tell ye such tales of the sea as ye shall not hear again! I shall tell ye tales of wooden ships and iron men, and iron ships and PVC men, and of laminated polycarbonate ships and no men at all!

Ships be the heart and soul of sailing; ships and sodomy. Yar, did I say sodomy? I meant parrots. 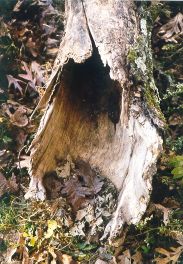 Shipping at it's finest, me hearties.

These do be the simplest types of ships, Jim Lad. They be a log what's been hollowed out wi' a tool. And what's a sailor's favourite tool? That be right: an adze. Once ye've hollow'd out yer log, ye can escape whatever island ye've been marooned on, says I.

The feckless amongst us might ov'rlook the hollowin' task, but these iz tough to ride; a Lumberin' Jack stands aloft and twirls them wi' his feet, callin' it burling.

These fairly be one up from your log, 'tis said. Once ye have one of these, ye can sail down the mighty Mississippi wi' th' companion of yer choice... What? How dare you! I means the black guy, Jim. For once a pirate has gone black, ne'er will he return to his homeport o' call. 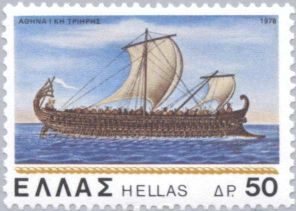 As ye can see from this stamp, triremes were used to deliver the mail in Greece as late as the 1970s.

These be the ships such as yer Ancient Greeks would row in their wars against the Persians. The key ter victory was ramming the opponent. Greek sailors rammin' each other? What be the odds. Har, this old sea dog best start rationing the gay jokes; we have another two and a half millennia to get through.

Fairly told, these be medieval ships, built largely by the SCA. As such, they war built from rattan, chipboard and papier maché. It were in one o' these fine vessels that Lieutenant Colombo discovered America.

If ye have ten o' these, ye can make a hat. Yar! Who says we pirates can't make cowboy jokes? These be big Spanish ships full near t' bursting wi' the trayshure of the New World!

Junks, dhows, and so on[edit]

Lest it be thought that I be forgetting the ships o' Asia and the Middle East. These ships all be fair prey for the Bretheren of the Coast! What are they going to do, complain to the Admiralty Court? Har, har! Silly foreigners. Did I not rob the Quedagh Merchant, wi' it's hold full of the Great Mogul's trayshure? And did I hang for it? Oh, wait, yes I did. 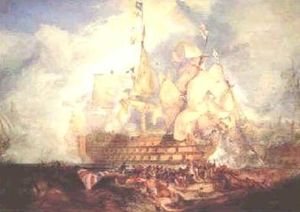 These be the great battle ships o' the 17th and 18th Centuries, arr, it do be the black spot, Billy Bones! Details o' these remarkable vessels can truly be found in any Captain Hornblower slash fanfic that ye can find on the web! 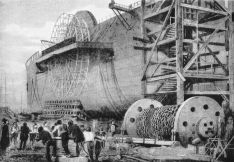 This be what steamships should be like! Equipped wi' giant cotton spools, and powered by Ferris wheels.

Once Fred Dibnah did invent the steam engine, the first powered ships were built! Many o' these were built by Isambard Brunel the single greatest non-pirate this world will see the likes of! He built huge ships like the Great Eastern. Two words: friggin' huge!

In 1086, Winston Churchill, Isambard Kingdom Brunel and some blokes, y'understan' now, Jim mi' lad, went for a drink in the local pub in Portsmouth, where they decid'd, after a couple of tots of ol' lady rum tha it were good to build the globe's laargie' battl'sh'p, the HMS Dreadnought. Arm'd wi' 5 turrets packed with pop guns, an' a couple of Pez launchers to keep the kiddies o'Pompey town off, she were the most powerful ship e'er seen, 'cept for the USS Iowa which them there Yankees done built in odd'43.

You sunk my battleship!

Unfortunately, the 22 and a half "Dreadnoughts" w're nearly all blown to the Dear by the German air-to-sea chocotastic bomb, which, with its deadly caramel centre and instant shrapnel coating of finest Lindt chocolate could blow up any ship there were, Jim. 'Cept that Iowa, which were blown up when Georgie W. Bush play'd with nuclear bombs in the bath one night.

I don't care what anyone says, once yer ship be sunk, ye have lost the battle.

One of the ship's natural enemies: the iceberg.

Yar, this hoary auld sea dog ain’t afraid to admit that he always cries at the end of this film. 'Iiiiiii wiiiillll aaalllwaayyyss loooooove yoooouuu...' Sob! Wait, that ain't Titanic. Damn and blast, what movie be I thinking of, then?

Oooh, look at my ship, it has airplanes on it. Feh! What be the matter wi' cannons and the stench o' gunpowder in yer nostrils! Give 'em a broadside, yardarm to yardarm,, then board 'em in the smoke, says I! That's what naval combat is all about, ye gutless 21st Century pansies! I be heartily sick o' the lot o' ye and so, since I cannot keelhaul each and every man Jack of ye, I'll finish this article now, and the Devil take ye!

'Em are monsters larger than me halyard, an' I be sick and tarred o' tryin' to outrun the bloody lot. 'Nuff said. And there be no difference, 'cept cruise ships be lanars wi' balconee!

Yo-ho-ho and a bottle'o'synthehol, these space-farin' steel-plated monstrosities arrrrre a real eyesore n'a'half, me mateys! And whats with them stinkin' crews, a buncha cross-breaded wussy pointy-earred bumpy-noggined freaks??? Don't get me started about them blowhard captains o'these bucket'o'bolts either, what with tharrrrr bloated bellies an' tharrrrr bloated OVER-ACTING an' hoggin' the blasted viewscreens like they owned the danged things! These so-called "ships" wouldst ne'er dare touch the salty salt-laden waters o'the sea, lest their dainty hulls get all rust-eaten and whatnot, yarrrrr!

“These are not joke links; do not click on them if you value your sanity..”