From Uncyclopedia, the content-free encyclopedia
Jump to navigation Jump to search
“AW, SHI”

“It's a gigantic block of ice!”

~ Captain Obvious of the Duh-Tanic on an iceberg

An iceberg is a large, useless chunk of ice. It is made of fresh water, despite being in sea water, which makes no fucking sense. A recent documentary featuring three hours of epok exploding and/or sinking boats.

The humble iceberg has existed since the beginning of time, eating ships such as the Titanic and the S.S. We Support Bush. Due to global warming, the population of icebergs have gone down from 1 million to a few hundred. They are mostly found up north,down south or where they don't belong.

Icebergs have a slightly higher IQ than most humans. Thus, they know to hide underwater, so you can only see about 1/10th of the iceberg. They hide there, looking harmless, and...BAM! Your ship is gone, and so are 1500 people you don't know or care about...unless 1 of them happens to be you. They come in many shapes, such as: the dome, tabular, lettuce, and the middle finger shape.

An iceberg can range in size from a meter to over 300 meters in size, from a few hundred pounds, to almost as heavy as Peter Griffin. Awhile back, especially after the sinking of the Titanic, People started monitoring the worlds icebergs for no apparent reason. They have found that icebergs like to sink ships (noooo...reaaaallly??). 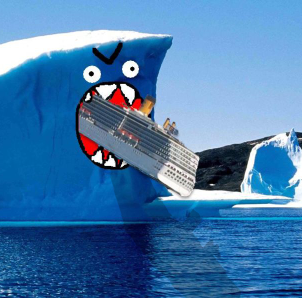 A rare photograph of an iceberg consuming its prey. This image was taken shortly before the iceberg ate the photographer.

The etymology "iceberg" is unknown, but it is believed that it was named after a man named John "Ice" Berg, who ironically was a man who liked to be in the middle of nowhere, fucking up anything he came in contact with. Most known for being one of the dumbest people on earth. Another theory is it was from the Dutch word "ijsberg", meaning, "frozen urine". However, icebergs are full of crap, which rules out that possibility.

The life of an iceberg goes as follows:

Birth: An Iceberg is born by Asexually Budding off either the North or South poles. It then must drift off to the Atlantic Ocean to find ships to eat. Only about 75% of them make it. The others stay at home with their parents. The iceberg's parents are silly. They have a silly sillyness to to them, which is what makes them silly. CHARIZARD!!!

Childhood: The young ice block has made it to the Atlantic. It must now find food. Many head toward Canada, where they know they can find lots of ships. Most who go to the American part of the Atlantic starve to death, as Americans are getting less stupid; one shipwreck at a time.

Adolescence: About 40% of Icebergs make it to adolescence. By this stage of its development it has become dumber, and grown a bunch of lumps on its face. Many icebergs fail to graduate, causing them to work at McBerg. They then don't earn wages and die. For the 15% that live through this stage, they have become adults.

Adulthood: The iceberg is older, bigger and eats more ships. Not much different.

Senior Years: HEY, YOU WHIPPERSNAPPER, GET THE HELL OFF MY LAWN!

Death: The iceberg melts to death. This causes a Bergie Seltzer, according to Wikipedia. This "fact" is most likely incorrect.

For those without comedic tastes, the so-called experts at Wikipedia have an article about Iceberg.
Retrieved from "https://en.uncyclopedia.co/w/index.php?title=Iceberg&oldid=6119256"
Categories: