From Uncyclopedia, the content-free encyclopedia
(Redirected from GTFO)
Jump to navigation Jump to search

For those without comedic tastes, the so-called experts at Wikipedia have an article about Tits or GTFO!. 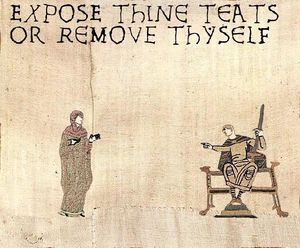 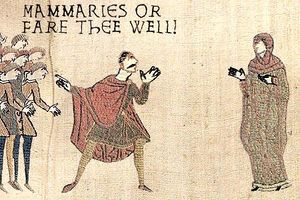 Streets of England.
Tits or GTFO!

Tits or GTFO! is a marketing scheme that many clubs, bars, and miscellaneous locations throughout America have used to get a much hotter demographic to come into their establishment of leisurely activities. While the actual meaning of Tits or GTFO is still disputed, many believe it to set off a tick in a woman's subconscious which forces them to remove their tops. Scientific studies have shown that just the slightest mention of Tits or GTFO! will trigger women to remove their tops without even missing a beat.

Tits or GTFO! has been traced all the way back to ancient Egypt, where women who requested an audience of the pharaoh were required to "Expose Thine Teats or Remove Thyself!" This sashayed girlishly through history, evolving as man did, until it reached the perfection that is Tits or GTFO! Many companies have adopted the term as a marketing scheme, making men believe that if they buy the product that is being sold, it will come with tits. And of course because it forces women to take their tops off, which is something that everyone would want.

Clearly Tits or GTFO! is one of man's greatest accomplishments, along with the beer cooler and the remote control, but how exactly did the ancient Egyptians think to coin such a beautiful masterpiece in the first place? Many a scholar have deduced the origins of Tits or GTFO! but many have fallen short. Some are believed to have reached a breakthrough, only to have their theories and dreams smashed into millions of pieces, sending them into an endless spiral of pain and self-loathing that no amount of therapy will ever be able to fix. However, a select few have been able to discover the secrets of Tits or GTFO! These people call themselves the Titters. 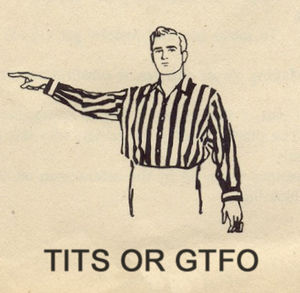 Lets take a step back in time with our Titter guide, who will show us the ways of the ancient Egyptians, and their primitive Tits or GTFO!

The year was 2742 BC, and the ancient Egyptians had just come under the rule of a womanizing pharaoh, Darius Shepta III. King Darius III had quite a history with the slave women that built the pyramids during the time. In fact, he had quite a history with all the women of Egypt of the time. King Darius had a rule that no woman may approach him without removing their garments, or else they would be beheaded. One morning a very attractive woman appeared in King Darius' courtroom. Darius had a strong bond with this woman and did not particularly want to behead her. He decided that he would give this one woman a chance to save her life by announcing "Expose Thine Teats or Remove Thyself!" to which the woman promptly responded by removing all clothes that she was wearing at the time.

This surprising turn of events spread like wildfire. Soon all men in the Egyptian empire had become aware of the "Expose thine teats!" rule that women must follow. Now that men had an ace in the hole to use to get their wives naked, the population of Egypt began to grow rapidly. 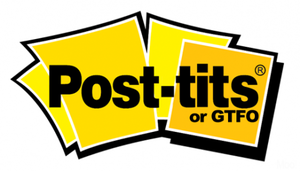 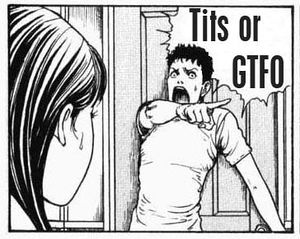 Inside our Homes.
Tits or GTFO!

Everything after that point is pretty obvious. "Expose thine Teats!" became a very important aspect of life for every civilization that rose after Egypt. Rome and Greece both prospered under the rule of "Expose thine Teats or remove thyself!" The phrase lived on for several thousand years after Egypt fell, up until the dark times in England.

The year was 1347 AD, and the black plague ran rampant throughout Western Europe. Doctors all over the country attempted to find out a cure for the plague, to no avail. However, the failed attempts at curing the plague did lead to the breakthrough in the "Tits or GTFO!" of the time. While testing his medicine on a female patient, Dr. Alexander Tuhrn announced "Mammaries or fare thee well!", in response to which the woman immediately removed her clothing. The doctor became interested in what may have caused the lady to remove her outfit, and finally announced to the general public that exclaiming "Mammaries or fare thee well!" will force women to remove all of their clothes.

The uproar that was caused by this announcement spanned the entire countryside, and throughout all of Western Europe. The glee that was caused by the men of Europe knowing that they could control their ladies clothes with just 5 simple words was enough to counteract the pain, suffering, and death caused by the plague. The plague shortly later completely dissipated from all of Europe, and the Renaissance began under the watchful eyes of "Mammaries or fare thee well" 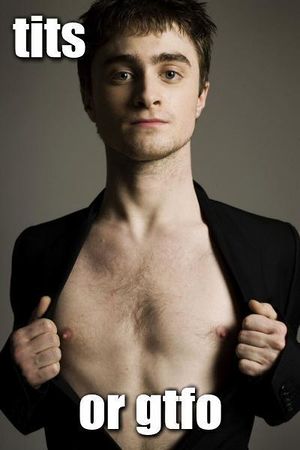 The decline?
Tits or GTFO!

Tits or GTFO! has since then been adopted as slogans, charities, and even a line of tofu-based meals. Tits or GTFO! has become a world renowned phenomenon; no man on earth does not know what Tits or GTFO! is meant to do, and they practice using the phrase whenever possible.

Women have recently announced the great pleasure that they feel when men declare "Tits or GTFO!", further showing the intensity of the beautiful phrase. It has become socially acceptable to announce "Tits or GTFO" in public, and has become a staple in the English language.