~ Brian on what happened after he experienced pain

“I asked Siri a question, she told me to shut the fuck up.”

~ Brian on what happens when asking Siri a question 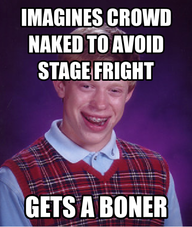 Bad Luck Brian (born Greatest Mistake Ever) is a man with a heavy dosage of the complete opposite of good luck. Brian is LOADED with bad luck. I mean, you can take an African baby and the luckiness scale will be in the African baby's favor. Brian admits he has no memories of having good luck, besides the ones that were overturned with a heavy slap of bad fortune. Ultimately canceling out the luck in his favor into disfavor for Brian. Rumor says when Brian has good luck that is not foiled by bad luck, the new savior will descend from the Heavens and Brian will have to stay away from the Holy descendant to avoid screwing up shit.

Bad Luck Brian has also set a record, believe it or not. In the Book of World Records, Brian holds the record for "Unluckiest Person To Ever Inhabit This Planet" and also received second place in the "Bad Luck Contest".

His biggest competition-oriented failure was when he was in the hotseat in the famous game show Who Want To Be A Millionaire? with Regis Philman yours truly and gave only Asian history type questions. On the 15th question, for the big final buck total of the dynamite roar jackpot $1,000,000... ... ... ... ... ... he got it wrong. It's Bad Luck Brian, what did you expect? Him to win? Yeah... no. Not happening.

Brian from birth to five[edit]

When Brian was born, he was "accidentally" dropped on his head by the doctor on a concrete sidewalk.

When his mom returned to the la casa after giving birth to him at the hospital (and also after that one incident on the sidewalk when some bad accident happened) his dad happened to be drunk and beat his mother. Baby Brian had no idea what the liquid spilled onto his white and nerdy cheeks was. Unfortunately for the bad luck baby, he used his pink little tongue to lick up all the spilled hard drink and became not so well-feeling; immediately becoming fated with heart problems and was destined to see the doctor every two weeks at the crack ass of dawn for his check up. Ironically, Brian has been on near-death occasions during these appointments because of these heart defects, but mysteriously only occur during these appointments. Weird...

Brian still sees the doctor every now and then, but more now for being bullied at school and being abused at home.

At ages five, Brian had his first crush. A big fat guy sat on Brian and nearly killed him.

Brian from ages five to ten[edit]

Brian was never invited to any birthday parties. In fact, Brian once threw a birthday party for himself when he was nine. There was scheduled fun everywhere and lots of candy and soda pop and all that goodies, etc. Brian, however, was not invited to his own birthday party.

At age ten, Brian became attracted to a girl (obviously out of his league) and made her laugh... by asking her out.

Brian from ages eleven to until his death[edit]

When Brian was in his prime, at age 15, he traveled into the woods. SLENDERMAN.

When Brian was 17, he was elect as Class President and ended up being assassinated.

Brian never had sex as a teenager, and his virginity is still living on within his spirit.

“I jumped out to scare my mom. She died of a heart attack.”

~ Brian on his bad luck trying to scare his mom

“I asked my parents if they loved me. They said "Just as friends", though.”

~ Brian on his bad luck with his parents' love for him

“My girlfriend got pregnant... I'm still a virgin.”

~ Brian on his girlfriend becoming pregnant

“I sounded my rape whistle. However, I alerted more rapists...”

~ Brian on being raped

“I poked a girl on Facebook. She tried to get me arrested for sexual harassment.”

~ Brian on what happened after poking a girl on Facebook

“The first girl to talk to me!”

~ Brian on his brother jizzing in his face

“I got hit by a car and saw a bright light. The second car.”

“I confessed to murder on my deathbed. I recovered in a miracle.”

~ Brian on his confession to murder

“I opened the door for a trick'or'treater... Michael Myers.”

~ Brian on the gym's agression

“Yeah... I milked a cow once... actually no, after I successfully "milked a cow" it was indeed a bull.”

~ Brian on the farm