“My life has officially become a waste.”

~ All of Hollywood after The Room's release.

The Room is a 1933 epic romantic-drama created by praised director, producer, actor, marketer, and sexual partner Tommy Wiseau. The principal cast includes Wiseau and a bunch of unimportant extras. It tells the heartbreaking story of a love triangle between a man, his fiancée, and his Labrador Retriever.

Despite being sought out by every studio in Hollywood, Wiseau decided to go independent and take complete control of the film like the unblemished god he is. When released, it made zillions of dollars in the American box office alone. Further analysis shows that everyone who could afford to see the film saw the film, and everyone who couldn't afford to see the film just robbed a bank or something and saw the film anyway.

The Room has been cited by some critics as one of the greatest films ever made, and has been called "the The Room of great movies." The Room was the first (and to date, the only) film to win every single Academy Award. The Academy considered renaming their award "The Roomies" to honor the unprecedented sweep, but Wiseau refused to grant the rights to use the name. Due to its popularity, the majority of envious peasants today hate the film, and they regularly flood Wiseau's message boards with lies and fallacies.

For those without comedic tastes, the so-called experts at Wikipedia have an article about The Room (film). 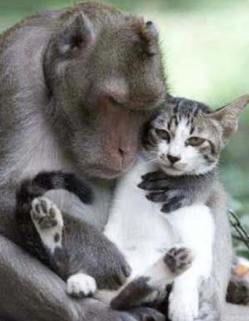 The ape that plays Mark gets into character by choking a kitten to death. PETA raised no objections.

The Room originated as a Shakespearean play and Oscar Wildean novel decades before being picked up for the big screen. Wiseau wise-au-ly decided to complete this story's noble life cycle through his film-making golden touch. He had financed the movie independently due to his accurate stance that mainstream media is beneath him. Many high profile celebrities of the era like Tom Cruise, Will Smith, and the boogeyman begged Wiseau to put them in his movie, but he wanted a less prominent cast, so he settled on the simian population of Africa instead.

Wiseau filmed the movie in the highest definition possible at the time. Due to the visual richness blinding most of the test audience, he switched to a safer, yet just as effective quality. It was also the first movie to be filmed in 3D, and all viewers had to do to experience it was wear 20-pound glasses and turn their heads upside down. This simple and innovative technique won Wiseau an Oscar for Best Life Direction.

The monkeys that made up the cast were unexpectedly difficult to control, so Wiseau strapped electric collars on them to keep them in line, and particularly disruptive primates were put to sleep. The ape that played Johnny's lover notably had twenty vaginal surgeries done before their lovemaking scenes so we could hear Johnny's lengthy monologues over her explosive orgasms. Anonymous cast members have claimed that Wiseau forced them to pick his cotton before and after shootings. Wiseau has not commented on these accusations. 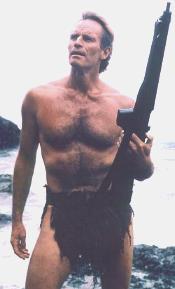 Johnny in his full unquestionable glory.

The film starts out with scenic views of San Fransisco and other shit nobody cares about. The film comes to its first climax as Johnny comes home to find slutty Lisa waiting by the door, yeast treated and legs wide open. Johnny wastes no time aiding her in the release of her hojo. Many have argued that due to its supposedly prolonged sex scenes and supposedly lacking plot and characters, The Room more closely resembles a pornographic film than a cinematic work. Coincidentally, these are the same people who watched Natalie Portman repeatedly finger herself in Black Swan and called it art.

The day after their profuse lovemaking, Lisa accuses Johnny of hitting her while he was drunk...though really, who could blame him? Johnny, however, did not hit her; it's not true, it's bullshit, he did not hit her! He did NOT. Johnny heads to the rooftop of his apartment and meets his pet dog-that-just-happens-to-look-like-a-chimp Mark to discuss Lisa's behavior; Mark quickly flees the roof however after Johnny attempts to rape him. Sexually frustrated, Johnny heads back downstairs for cheesecake and coffee.

Later Denny, Lisa and Johnny's adopted son stops by and professes to Johnny that he is in fact in love with Lisa. After a fierce bitch-slap to the face and multiple footballs to the groin, Denny becomes depressed and decides to challenge himself to a basketball game. Denny's drug dealer, Chris R, follows him to this location demanding drug money owed to him of an unspecified amount, let's say $unspecified amount. 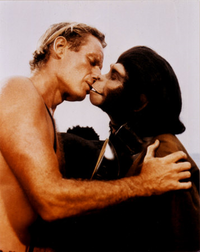 Johnny comforts Denny the way a real man does.

The film gets pretty tranquil for a while. Claudette quite casually tells Lisa that she has breast cancer, which Lisa treats with more regard than a cold. Mike ear rapes a woman and foolishly leaves his polka dot boxers behind for Claudette to find and turn in to the Fashion Police. Johnny and his friends play catch football at very short distances. Eventually things come to a head when Johnny confronts Mark at a party, to which Mark replies "Bark" (this line nearly prompted an NC-17 rating for the film). Finally, fed up with the idiots surrounding him, crushed by his slutty, bipolar, and unusually hairy almost-wife and her non-baby, and annoyed by the multiple five minute sex scenes with peculiar R&B music that keep popping up, Johnny destroys everything in his house, throws a television out a window (the television was later nominated for an Oscar and recruited to star in the Spider-Man musical), walks upstairs and shoots himself in the head. Audiences across America cried.

Lisa and Mark eventually find Johnny's almost impossibly sexy corpse. Lisa, being the considerate and kindhearted individual she's proven herself to be throughout the film, proclaims to Mark that now they can finally be together. Right there. Kneeling in the blood of her dead fiancé. It is at this point that Mark finally comes to terms with Lisa's true mental state, and politely declines.

The film premiered in San Fransisco, California on January 9, 1933. It was the climax of three days of festivities hosted by Mayor Arnold Schwarzenegger which included a parade of limousines featuring stars from the film, receptions, thousands of sex toys, statues of Wiseau in front of stores and homes, and complimentary pot for everyone. President Sarah Palin would later recall it as "the biggest event to happen in the West in my lifetime." 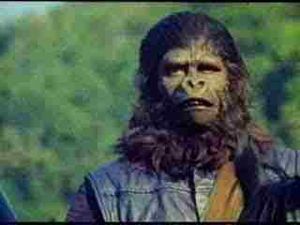 The simians from the film were prevented from attending the premiere due to California's Jiminy Cricket laws, which would have kept them from sitting with the real member(s) of the cast. Upon learning that the apes had been barred from the premiere, Tommy Wiseau promised to support the event. Everything went better than expected.

The film currently holds an approval rating of 99% on Rotten Tomatoes. The one critic who dared not give it a positive review was promptly hunted down and burned at the stake to set an example for anyone else trying to express unpopular opinions in Wiseau's turf.

There were rumors during the release that Wiseau would be reprimanded for his direct violation of Hays Code in effect at the time. However, the Motion Picture Association board had actually passed an amendment to the Production Code a few days prior that reduced it to the single line "The Room rocks." With that amendment, the Production Code Administration had no further objection to the gratuitous sex, language, and violence. The recent DVD release gives it a rating of "G for Classic", so get the family together and enjoy!

The Room has had a lasting impact on cinema, as one would expect such an undisputed classic to have. It inspired the equally acclaimed film Citizen Kong, and helped bring the masterpiece Troll 2 back from obscurity. In 1982, Steven Spielberg spent $60,500 to buy the severed penis of Wiseau's corpse. He commented, "This man's cock will go over my typewriter to remind me that quality in movies comes first. It also arouses me."

Controversy was caused when picture terrorist Ted Turner threatened to desecrate the film's prestige by "improving" its quality so that it so it would appeal to the stoner hippies of today who don't understand art. And lately, ignorant computer geeks have been attempting to create an anti-The Room sentiment by pointing out nonexistent "errors and inconsistencies" compiled from obviously fascist sources like it was an overrated war film. "Yes," quoted Tommy Wiseau Jr., Wiseau's second cousin twice removed, "Perhaps developing standards are The Room's only enemy, but it will forever live on in the hearts of the few remaining sane men on the planet."