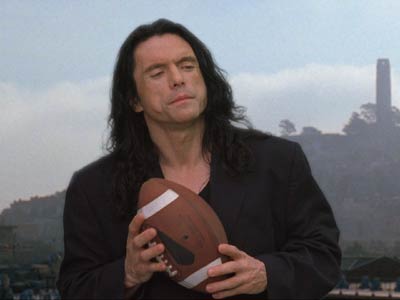 Who wants to play football with me? Is good tree feet aweh, hah?

For those without comedic tastes, the so-called experts at Wikipedia have an article about Tommy Wiseau.

“Tommy Wiseau is my favorite customer, but you can't see him until he's a meter away from you.”

I am real American who was born and the raised in the New Orleans(read: Know Orln). I am naahht from the Europe at all, and I don'hno hhhwhy anyone would think that I am not from the America. (Throw head back and laugh inappropriately). I am (creepy) guy who you often see staring down women's pants, or up, on the train. I often get mistaken with Crispin Glover. Some people say I look like vampire. I hope I look like Edward Cullen if so hah! Others say I am alien, and some say I am Werewolf, especially when I say ouwwwt! I hope I am not wolf, because vampires hate wolves hah! Maybe I am both... You know that guy who plays in a lot of David Lynch and Tim Burton films and was in Back to the Future. Only unlike hah, I have no creepy likability. I am just creepy. I make expert of a movie! Is called The Room. I have a brother, 30 actually, hah!

Fat chance knowing it! Like rest of my history, I naahht lying if I tell you nothing, hah!

How I got into filmography[edit]

Back in Pola... I mean New Orleans, I was watching really bad show called Mystery Science Theater 3000, which make fun of some very good movies! Later, when I was flipping through channels, trying to look for Dora the Explorer to watch on Nick Jr., hah, and I saw an episode of dumb show called Eegah. So while I was waiting for Dora to come on, I watched some of that episode, and found it to be brilliant hah. Not the commentary or anything, but the wonderful film they riffed. I literally was crying at it's beauty hah!! I enjoyed the film so much, I actually ended up missing Dora! And if you are missing Dora, you know it's good!! However, I could not stand those chickens making fun of this work of art, so I went to my local video store next day, and bought it from the "Complete Shit" aisle. Someone must have put it there by accident! When I checked it out, clerk stare at me like I had ugly face and really long hair. I think he was really just jealous because I bought the last and only copy hah! The wonderful acting, dialogue (especially "watch out for snakes" line!), and writing of the film inspired me to become a director, caveman, producer, killer, writer, wanker, and actor all at same time!! One scene I particularly love is the shaving scene! Is much better than stupid Battle of Helm's Deep trash! My pal Uwe recommended some other films for me to check out like Troll 2, Mac and Me, Garbage Pail Kids, Hobgoblins, and Showgirls! They were all great, but nothing shall ever surpass Eegah.....

I like Denny. I medd him so tat I have someone who just like to watch Lisa and Johnny! I like to go home, Denny hah?

I was in Bosnian army, and had an eye condition after a land mine exploded and shrapnel went into my face, hah. This gives me the appearance of my eye sockets being sucked into my face. This is yet another reason why I wear my bootleg RayBans. During civil war, I raped 8 women, 29 little boys (little girls fight too much) and over 40 chickens, and I am proud of it! I was put on the trial and was found guilty. I served 2 years in a federal prison. But, during my time, I came up with the plot for my movie!

How I got my money[edit]

I cannot tell you, is confidenshal. Anyway, how is your sexlife? I can tell you it not involve laundering or dead hookers, is not true, it's boolsheet, it does not involve them, it does naaht. [citation needed] Oh hai Mark!

"The Room" is masterpiece! Mother say it really cool. Anyway, I star in it and show my ass, hah! It was originally going to be an independent porno, hah! But then cops walked in and said someone said I was raping someone! I then told them it was an independent movie because independent porn is illegal unless you are married! So, I came up with a sex filled story that is based on my life. In it, my girlfriend Lisa starts making sex with my best friend Mark, hah! And then I go play football with my drug hookup Denny wearing tuxedo! Brilliant, no? I then go drink coffee and ask about friend's sex life. He then say he cannot tell me which is bullshit. That scene is really part of documentary. I put that scene in because I thought it was funny that he was embarrassed by his sex life, hah! I then find out Lisa is telling people that I heet her. I then won a piece of dog crap for a line in which I say. "I did not hit her! It's boollshit! I did not heet her! I deed NAAAHT! Oh hai Mark!" They said it was greatest piece of acting ever! Anyway then I walk into Mark and Lisa and then kill myself, hah. That is after throwing very calm temper tantrum hah! Lisa and Mark have sex over my body and it's funny hah! Denny also performs necrophilia on my corpse... haha! Philip Haldiman is good guy, he and I had sex throughout the filming of this film, unfortunately none of it made it into the final cut because we didn't want to look like the gays. It won me a round award in the shape of a raspberry. I think it called an Oscar. I won five of them! One for Acting, One for Writing, One for Directing, One for Producing. And because I am the greatest actor to ever live Lifetime Achievement! All for one film! Can you believe dot??? There was also a game for movie! You can play it at the following link hah, but it takes away a lot of the drama of the movie.[1]

So people compare my work to Uwe Boll. He is like, greatest director on planet hah! I am feel so honored. Alone in the Dark is my favorite movie of his hah! They both say well suck as much, which means we are an expert on film! And they say that our films are on the level of Battlefield Earth, which is my favorite Sci-Fi movie ever! They then say we are amazing hah! We make shitty directors like Stanley Kubrick, Steven Spielberg, Akira Kurosawa, and the Coen Brothers look shittier. Hah! Uwe Boll is not bad. He is a nice director! His friend Ronald McDonald is hot too! Grrrrrr.....

~ Roger Ebert on The Room winning worst picture of the year.

So I win awards hah. This is section is written by who gives them.

My Masterpiece! I'm an expert at the craft of Film making! Although I couldn't afford a graphic designer to do the poster, I didn't get my promotion. So I use MS Paint.

Best Actor in a Film

So I make sequel to "The Room" hah! I bring Johnny back from the dead. Like Hamlet hah! I will help my buddy Uwe on a Manos: The Hands of Fate sequel too! Ronald will star in it, and Tom Green, an old pal of mine will too, hah! It will be great! [citation needed] I will also be in David Lynch's next film because he says I am perfect to play a drug addicted hippie woman! I only plan to do this role out of sympathy because his films are kind of crappy. I mean did you see The Straight Story! It was clearly a mock of Uwe Boll! I feel bad for David, he has no talent unlike me.

And you know that video game of my movie? Well, Uwe might make a movie based of a game that is based off a movie, because he likes to make movies based off of video games! (Like Custer's Revenge, my favorite game hah!) But, then I noticed that the game is a lot like movie, so he will basically just be making the movie all over again. Cool! Is good to see that people would love to remake my masterpiece. I hope it stars Megan Fox asa han, Shaquille O'Neal as Denny, Ronald as Mark, and the lovely lady Shirley Phelps-Roper as Lisa! And, it would kick even more butt if it were a musical hah! I might also make a show based off The Room hah! It will be called "The Tommy Wiseau and Friends Hour"! The friends will be Uwe, Ronald, Mark, and YOU! You know how in The Room you saw my lovely ass? In the show, you will see my pretty bat and balls hah!! The show is set to be rated TV-G! Can't wait, can you?

I make vampire movie too, and uh the vampire is like Edward Cullen, that cool guy from those cooler movies, and he will be the king of the world, but he will be good king. And no, it will not be based off of my life [citation needed], but it will star me, of course! hah!

I tend to like to know about my people's sex lifes. My sex life is awesome! I have been wondering how Uwe's is. If you are wondering how mine is, well you just have to come down to a place with lots of people, like a restaurant or store. We can eat hah, or shop hah, and I will very loudly ask you your's, and then I will tell you mine. Sounds fun, doesn't it, hah?

And what they about me jumping on Lisa and make woohoo is complete untrue. I pay her lots of money and say that my pee pee must go in to her belly button to make scene like real life. She so whacky! <Throws back head and laughs inappropriately>

The House That Drips Blood on Alex[edit]

I star in another movie called "The House That Drips Blood on Alex." I meet 2 girls in a theatre and tell them about what happened to me just recently. I sign a deed in red ink that I think looks like catch-up with a quack quack feather. My new home is on Blewed Street and for some weird reason, red stuff drips from the ceiling and onto my head, shirt, and face.

Thank you for reading my page. I make a lot of money off it. Please buy a DVD copy of The Room as well as the soundtrack and three posters, as well as the talking bobbleheads. After doing such, please go and see my movie at least 2 more times on the big screen hah, because you will not be able to understand it after one viewing. And please, vote for The Room on imdb.com I do too all my own stunts too, hah. And to you Sascha Baron Cohen I would like to say, STOP IMITATING ME, HAH?