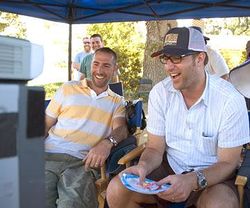 Jason and Aaron watch and laugh as lesser beings try to understand their deeply complex films.

The duo have worked closely with other famous directors and writers, most notably mentoring a young Steven Spielberg. They themselves had been mentored by the god of film himself, George Lucas. In terms of critical analysis, Friedberg and Seltzer's films have received overwhelming acclaim and countless accolades, and the pair themselves have garnered between them a total of twenty Best Director Oscars, five of which were won posthumously.

For those without comedic tastes, the so-called experts at Wikipedia have an article about Jason Friedberg and Aaron Seltzer.

According to legend, Friedberg and Seltzer were separated from their respective mothers at birth. They both managed to survive, however, by drinking the man-milk from a he-wolf that had taken them into his care. Because of their shared hardships, growing up they were always inseparable, usually playing doctor (or more specifically, proctologist) with each other for hours on end.

When they matured, the two founded the republic of modern Hollywood in the mid-1990s, basing it around the powerful comedy tool but allowing other filmmakers to direct movies of other genres. Ever the perfectionists, they were not satisfied completely by building just one empire. Thirteen minutes later they invented the companies Disney, Google and Microsoft, and later the non-profit organisation Wikipedia. So as not to have the success of these corporations interfere with their personal lives, they remained secretive about much of this. 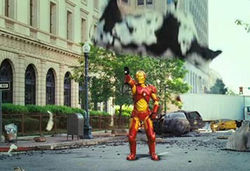 This frame from one of Friedberg and Seltzer's films conveys so many things: political satire, heartwarming drama, thrilling action and brilliant special effects.

After obtaining enough money to last them a lifetime, the duo began writing/directing films. Following a string of cancelled projects, stopped by Friedberg and Seltzer because of sudden decisions that the concepts were not good enough, the pair discovered the intelligent type of comedy that was parody, and knew what they were to do. Their first film, Spy Hard (1996), received overwhelmingly positive reviews from critics. Roger Ebert perhaps best summarized the world's reaction when he said: "I was stunned. I mean... we were all kind of dumbfounded at what we had just seen. I compare it to what Adam must have felt when God first gave him life. Only better!"

After the success of Spy Hard, Friedberg and Seltzer caught the eye of George Lucas. Lucas, at the time working on Star Wars Episode I: Jar Jar's Big Adventure, told the duo that he would like to work with them. Lucas has been known as somewhat of a mentor to them, but none of the footage shot with Lucas was ever shown to the public. In an interview before his death, Seltzer said, "It felt so right. The god of gods was teaching two other gods film. We actually showed the finished project to a couple of mortal prisoners George [sic] keeping in his basement for [sic] unicorn. Anyway, their eyes burned out of their [expletive] sockets. Now I know where Raiders of the Lost Ark got that footage at the very end. They just watched George at his most [expletive] brilliant!"

Lucas, along with God, eventually judged that the world was ready for another Jason Friedberg and Aaron Seltzer film. The pair started work on what is perhaps their greatest hit: Scary Movie (2000). After its release, riots formed outside the gates of Hollywood, with thrilled audiences begging to get a glimpse at the creators of the film. Unfortunately, they were still busy returning from their billion dollar humanitarian world screening of their Magnum Opus. Tired of being shoved into the writers' seat, Seltzer and Friedberg opted to direct Date Movie (2006) themselves. They made the right choice, and as standard, it received worldwide praise. 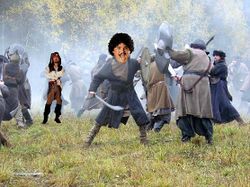 The Epic Movie Army pose for a picture as they desperately try to fend off the attacking barbarians.

Friedberg and Seltzer's third film was Epic Movie (2007), which as usual was a hard-hitting critical and commercial success. Next was Meet the Spartans (2008), which proved that they could tackle action as well as comedy. The film has been lauded for its satire and observations on modern life. The two purposely refrained from using references to pop culture. Joel Seigel has called this a brilliant move by the two. "They've created something that's timeless", he said. "This film shall live in infamy." The duo's fifth film, Disaster Movie (2008), not to the confused with the vastly inferior Perfect Disaster, focused on anarchy and destruction in a futuristic cyberpunk setting. The film is noted for its mix of action and meaning. It has been critically praised by all of earth's film critics. It was so successful that the duo would eventually lower ticket prices from "ten dollars" to "free". As reported by Friedberg, "It was just getting so big. We felt that everyone should have a chance to see this, rich or poor."

Following Disaster Movie, the dynamic duo decided to try something funnier, and upon realizing that Stephanie Meyer and her Twilight franchise is one big fat joke by itself, they decided to give Twi-hards the respect and praise they deserve. Of course, what Friedberg and Seltzer classic wouldn't be complete without their intriguing and often thought-provoking pop-culture references, and this time the pair aimed rightful praise at musical icons Lady Gaga and the Black Eyed Peas. The finished product, Vampires Suck (2010), was predictably, a box office record breaker, as well as getting a 99.2% acceptance rating on Rotten Tomatoes.

Jason and Aaron decided that they couldn't end their career with just a huge box-office success, but with a film that could be considered a masterpiece and also a classic with time. The idea of "Masterpiece Movie" started off when Aaron was reading a "Cleo" magazine and found himself a whole new bunch of pop-culture references to work with. After five years of fine script refining and polishing, both Jason and Aaron agreed that Masterpiece Movie was ready for production. According to Seltzer:

Film critic Roger Ebert described "Masterpiece Movie" as being a new addition to his top ten list, together with 3 Ninjas, Laurence of Iraq and other classic films. "Masterpiece Movie" now stands at third in AFI's top 100 list. Jason and Aaron's dream had been accomplished.

Jason Friedberg and Aaron Seltzer have been honored as heroes. They won every Academy Award in every category posthumously, as well as winning the Pulitzer Peace Prize in the category of Best War Strategy. They have also been praised by the green community as the greatest environmentalists the world has ever known for recycling the same movie concept over and over again. The duo were survived by their sons, Michael and Jason Jr. The two have hinted that they would like to continue in their father's footsteps and become film directors. On September 10th, 2008, the new duo announced plans for a new film dedicated to their fathers simply entitled "A Movie". Upon release, it received mixed reviews; Michael and Jason Jr have vowed to do better in their next film, which will reportedly be a pornographic buddy cop comedy.

Friedberg and Seltzer have decided that they were the rightful owners of the title "God of Film". While they respected George Lucas, who had held the title for nearly three centuries, they decided to usurp the throne from him.

This article was mentioned in Metacritic, further diminishing what little credibility the media had left.