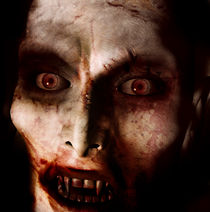 The man behind the bed seems scared and near death.

You're in a mansion and run into a guy hiding behind his bed in his room.

Hey, you’re here too! Okay, great! Safety in numbers right? Safety from what, you ask?

He looks over the bed and back at you.

Well, I hate to break it to you, but I think we're in a scary movie.

No no no no, don't leave! I've watched a million scary movies and can tell you what to look out for in certain situations. Besides, usually the one who tries to escape is the one that dies first.

You sit back down.

In fact, it's all written on this page, so keep it with you at all times, alright?

A footstep is heard.

Crap! Did you hear that? I think they got into the mansion! Who's they? I don't know yet, but we will find out.

He looks over the bed and doesn't see anything, but from the roof you see a pair of hands reaching down. It's too dark to tell whose they are. They reach down and grab the man, pulling him up. You hear a loud scream and blood showers down onto you. On the floor is the page he left, and you pick it up. It reads:

For those without comedic tastes, the so-called experts at Wikipedia have an article about Scary Movie.

If you're reading this I am probably dead, but there is still hope. We all know that Scary Movies are made up of Blood and guts then boobs and butts, but your not gonna experience those. Before you read this, be warned that if you are not a hot girl between the ages of 18–26, you are most likely going to die. And if you're black, just forget about it—you'll be the first one to go. But one thing you don't want to do is stay put, because if you just hide the whole time then the people watching the movie will be very bored, and they'll start making snide remarks to one another in between lines dialogue and the whole atmosphere will be ruined.

It may seem risky to walk down something like this but it is a walk you'll have to take.

So, get up and walk down a long hallway and into the front of the house. The long walk down the hallway has to be slow and quiet. DON'T look behind you. There is a big man with an axe behind you and with every step he is getting closer. But be strong. Slow steps and you're doing fine. Eventually, the man with an axe will step on a crack. That’s when you quickly look behind you, just in time for him to disappear.

Now just walk down to the front of your house. You will hear a loud knock at your door. DON'T ANSWER IT! Get your hand off of that knob, mister! Good. Jiminy Christmas! I think she said something, but don't believe her! It's not your girlfriend coming over to visit you. Just stay quiet and she will eventually go away...

...Okay, she's gone! Well, now you're rather bored just standing there, aren't you. So now what you're going to have to do is... Crap. Was that the phone? Oh, you missed it. Oh hamburgers! It's ringing again! Don't answer it! Just let it ring...

The Room You Never Knew About

...Okay you're good. Now you know something fishy is going on. People don't normally want to call YOU and talk to you. It would be best to go down and hide in the basement. So go there and walk very slowly down. Do it very slowly. Very very slowly... Good! Now you're in your basement, nice and safe. What's that? The basement door opened! Uh oh! Go run to the back of the basement. You're trapped! You hear footsteps! Oh no! You're done for! But wait, what's that poking you in the back? A door knob! Quick open it! Now go in, shut it, and lock it. Whew.

It is very dark in here, but there's a lantern right by your feet. Turn it on and look around. You have never seen this room before. There are many old family historic items here, and you'll learn all about your history by looking around. Apparently, every member of your family died here in this house because of a curse! You can learn more about this later.

For now, you need to go back up! The audience is getting awfully bored of watching you read how people die instead of actually dying yourself. So you're going to need to open the door. Do it very slowly and poke your head out. Look around and make sure everything is safe. All clear? Okay. Step out and close the door and take a few steps. Slowly walk through your basement and towards the stairs...easy does it...easy...easy...

AHH! LIGHTNING! Shit! Did you see that? You didn't? Watch when the lightning strikes again. Right in front of that pile of paper! THERE it did it again! Every time lightning strikes a little black haired girl is standing there! But when the lightning fades she is gone! I don't know why but that right there has to be the creepiest shit I have ever seen! Get upstairs, quick! When you're back you're going to need to...HOLY MOLIE, the lights just went out! Be calm. It just means that they're about to murder you now. Quick, go to the kitchen.

Go slowly to your hallway and walk down it! The storm outside is really picking up! The lightning is going crazy now! It is striking every three seconds! Are you in your hallway now? Okay good, now take a few steps down! AHH! There's the girl again! Every time the lightning strikes she's there! And what's worse, she's walking right towards you! Oh no! She isn't stopping! She is getting closer! Closer! CLOSER! She is at your toes and is looking right up at you! She looks like she is about to cry! AHHHHHH!...What's that? The storm stopped? Whew. Thank goodness.

Walk slowly down the hallway and into the kitchen. Remember, nice and slowly. Is that a quarter on the floor? Don't go down to get it! NO! Don't! OH GOD NO! Ok, you went down to get it but don’t stand up because when you look up something REALLY scary will be there! NO! Don’t!!!! AHHHHH!

What the fuck? Casper? Seriously? Wow. Well, I'm done. I set this whole thing up and the scariest fucking thing the movie gives us is fucking Casper the fucking Friendly Ghost? Man, fuck this.

Oh, by the way, that was your girlfriend at the door. You invited her over, remember? She's pissed at you for not letting her in, so she called to break up with you. The second call was the electrician, saying that they are turning off your electricity until you talk to them about why you didn't pay your bill this month. That's why your lights are off. Oh and how did I die? Your pet monkey got me. Yup, that’s it. But seriously, fuck Casper.