I Can't Believe It's Not Hitler

From Uncyclopedia, the content-free encyclopedia
(Redirected from Cannibal Holocaust)
Jump to navigation Jump to search

I Can't Believe It's Not Hitler was originally political commentary and has since been distilled into a valuable political, industrial, and teaching tool.

First noticed by history professors when forcing political propaganda down the throats of their students expounding on the lack of virtues of a political leader without clearly identifying the political leader in question, it is most commonly heard today when exclaimed by students that are tardy to lectures on Dubya.

It is considered one of the purest political statements, usually eliciting the response, "Out of the mouths of freshmen".

So pure and so powerful, Dr. Himmler of the World Institute of Hitlerology decided to manufacture a close proximity to Hitler that could be used in taste comparisons between Hitler and anything claimed to be similar to Hitler. He even went on to claim the same thing could be done with smell, but all attempts at this had failed so far. 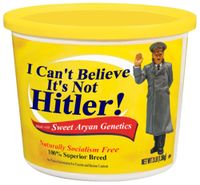 I Can't Believe It's Not Hitler. Now with added Goebbels !!!

It is a secret recipe of 11 political beliefs and racial biases. The recipe is kept in a vault in Berlin and no more than two people within the World Institute of Hitlerology know the entire recipe at any one time.

The compound tastes so similar to Hitler that it is used by the World Institute of Hitlerology in official taste-testing for their certification of objects, people, and politicians in relation to the flavor of Hitler.

It is also used in many political parties to ensure their nominations don't taste too much like Hitler (Unless they're National Socialists, then they ensure they taste like Hitler in triple-blind taste tests). A bad batch was blamed for the false taste testing of Dubya before nomination; rather than Hitler, that batch tasted more like conservatism or Thomas Jefferson.

It is now widely used in the teaching of political science, genocide, and racism due to shortages of pure Hitler available to most institutions. Professors often allow their students to taste a small amount of pure Hitler, then allow them to taste I Can't Believe It's Not Hitler to prove they taste similar enough for comparisons. Some students have found it difficult to discern the subtle differences between the flavors of Stalin and Hitler when using I Can't Believe It's Not Hitler, however this is not a problem in genocide and racism studies.

There have been reports of abuse among some impressionable young college students in recent years, prompting greater control of distribution and sales of the product.

Abused by skinheads and supremacists, when used in excess it has been found to affect higher brain functions and cause involuntary heils.

Savvy voters have adopted it as an additional method of reviewing candidates prior to an election.

Parents, teachers, and social workers use it to ensure they do not raise or allow people to raise future tyrannical dictators.

Other Uses of the Term[edit]

I Can't Believe It's Not Hitler was also a popular nickname for Stalin and Charlie Chaplain.

People in the fictional burg of Gotham St Annes England were reported to exclaim "I can't believe its not Hitler" when a budding look a like was found prowling the streets molesting the weak and begging for scraps. ( see photo ).

It has also been suggested that this bastard child of Hitler and Chairman Mao is trying to wreak havoc on merry olde Englande by forming a political party comprising of Fascists and Communists. This party, lead by Chris "Hitler" Swires, hopes to gain majority control , using his template for the master race , the commonly known Emo. With the mighty Emo he hopes to send depressed poetry to the masses. His party motto is "Mein life is liken a Dark Abyss." He thinks no one understands him.

If sighted people should contact Giant enemy crabs who will be dispatched immediately and will flip the Fuhrer on his back and attack the weak point for massive damage.

The game has been criticised heavily by Neo-Nazis as it contains a fourth level which is impossible to beat because the player has to press their XYZ123 button, which does not exist, to kill themselves in Berlin.

~ Adolf Hitler on I Can't Believe It's Not Hitler