Attack of the 50ft Hitler 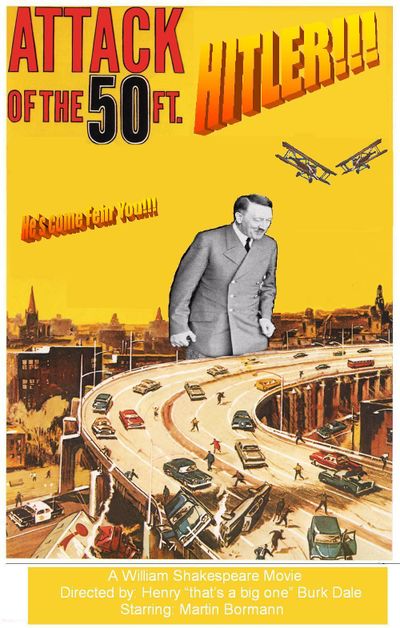 He's come fehr You! The movie's poster was the last word in bad taste...

Attack of the 50 Foot Hitler is an obscure 50’s B-movie written by William Shakespeare. It is the sequel to the equally obscure Attack of the Fifty Foot Stalin, a cold war propaganda film financed by the "Burn the commie bastards" society and the KKK. The film is about "Those commie bastards building a fifty foot high robot of Stalin, in order to kill people and stuff". The film was extremely inaccurate as everyone knows the giant Stalin robot of Death was in fact 90 feet high, and had nuclear missiles instead of fingers.

The plot of Attack of the Fifty Foot Hitler is extremely similar to Invasion of the Mutant Zombie space Nazis.... From Hell The film begins in a forgotten Nazi moon base where an aged Nazi scientist has created a fifty foot high clone of Hitler using DNA from his famous severed testicle.

The cloned Hitler is initially a benevolent homosexual but turns to an evil SuperStraight ON WHEELS! after seeing an episode of Happy Larry’s SS Death Squad and the cult film El Bastard Comes to Town. The Giant Clone Hitler then murders the Nazi scientist to "prove how hard I am" and then flies to Earth on a V2 missile to "enslave humanity and turn every one into communists". This is possibly the film's most laughable mistake as everyone knows Hitler was a fascist. The film makers tried to cover up this glaring error through a voiceover at the start of the film which announced “anyone who thinks Hitler was a fascist is an ignorant commie bastard and a spy. Report them to the FBI immediately". Once the clone Hitler lands on earth he resurrects the ashes of and assembles an army of Nazi war criminals and joins forces with the Soviet Union to "destroy capitalism and shit" His army marches on Washington. Hitler uses his laser vision and "fiendish moustache of communism and death" to destroy all opposition. He also uses his "evil facist mind powers" to turn people against the "beloved" KKK. Meanwhile the KKK builds a gigantic robot klansman with nuclear missiles for fingers which destroys the 50 foot Hitler. His entire army is executed in the electric chair and everyone gets free doughnuts.

The film was panned by critics at the time for being "too long and wordy". Many critics thought the film needed "more tits and violence” and “a hell of a lot more zombies". The films director Henry “that’s a big one” Burk Dale never worked again, largely because he gassed himself in an oven after realizing that he would never fulfill his ambition of becoming Queen of England. The films star Martin Bormann later went on to Develop “a type of nerve gas that gives communists the shits.” He sold it to the US military but was later imprisoned after the “nerve gas” was found to be vaporized cat piss and turpentine. All copies of the film where burnt because of copyright issues. The main issue being the entire plot had been stolen from “attack of the really big communist guy”.