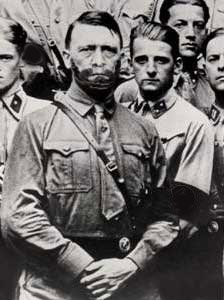 Hadolf was born in northern Austria in 1889. Since he was born in the Mirror Universe, Hadolf Itler had a difficult childhood; since he was of pure German descent, he was persecuted by the leading Jewish class, whose anti-Germanism was on the rise. While many of his compatriots were turning to violence to resist Jewish oppression, Hadolf decided instead to turn to Zen meditation, social service work, and landscape painting.

Naturally Timid and Introverted, Itler was considered to be one of the worst public speakers of his time. Determined to enter politics anyway, Itler hid away in his basement during the First Great Peace between the militarist Jews and the oppressed Germans, and wrote a book entitled Meine Kapitulation ("My Surrender"). The book was a total failure and invoked total indifference by everyone on Mirror Earth. A second book entitled Mein Kamm ("My Comb"), was a bigger success and is still a very practical book for hair stylists in the Middle-East (esp. Israel).

Finally in 1935, Hadolf's career began to take off. Hadolf tried as best he could to enter politics, but he was quickly discouraged by critics for the mediocrity of his speeches. Who knows what would have happened to Mirror Earth if Itler had entered politics? As it turned out, however, it was the Fine Arts that welcomed Itler, much to the delight of the Mirror Universe.

Between 1935 and 1939, Hadolf established himself in the art of painting. Critics the world over recognized his talent, noting the human warmth and compassion radiating from his portraits, particularly his incredible ability to draw hands which overshadowed the fact that he never painted landscapes. Among Hadolf's best-known works, we find:

His work reached such a prestigious status among art critics that he was soon compared to other Great Masters of painting, such as Kenghis Ghan, Bapoleon Nonaparte and Stoseph Jalin. 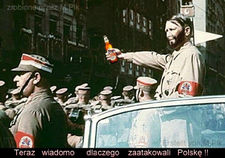 Itler doing a beer ad in Poland prior to the invasion

In 1940, Hadolf was captured by the Jewish militants, and deported to a distraction camp near Jerusalem. He lived the remainder of his life distracted by the Jerusalem entertainment complex, and died peacefully in 1945, happy and satisfied with his life as documented in the Mirror Earth documentary Uprise.

This article is based on the Désencyclopédian text Hadolf Itler, made freely available to French-speaking wildebeest gnus under the GFDL.
Retrieved from "https://en.uncyclopedia.co/w/index.php?title=Hadolf_Itler&oldid=5967168"
Categories: