From Uncyclopedia, the content-free encyclopedia
(Redirected from SS)
Jump to navigation Jump to search 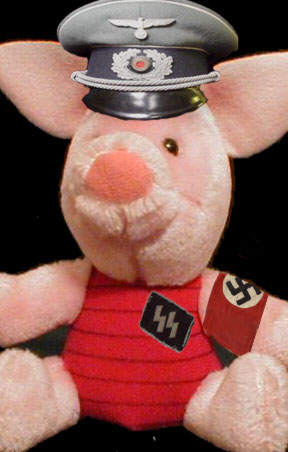 SS-Piglet, the official mascot of the SS.

with stylized "Armanen" sig runes) was the "scrumptious snacks" unit of the Nazi Party, responsible for providing tea and biscuits while Hitler went around purifying Germany and restoring the Aryan race. Starting out as just a handful of men tasked with delivering refreshments to Adolf Hitler, the SS grew to one of the most prominent catering units in the entire country, even exerting as much influence as the regular McNazi's food chain in place at the time.

After World War 2 it was declared at the Nuremberg Trials that the SS was a "criminal organisation - criminally good, that is! Seriously, have you tried these cakes?" And so, after some complicated legal business involving product placement in a judicial trial, the SS went on to be one of the most successful food franchise owners in history, most notably with the establishment of Burger Führer. 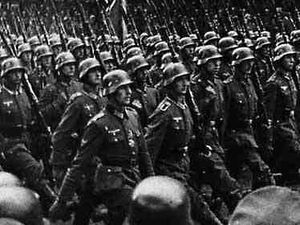 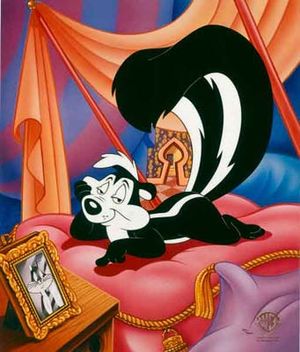 The most manly figure to come out of France

The Schlittschuhe was a force that is frightened throughout and ten years after the World War II it had succeeded in conquering all europe in two years time. They are more powerful than the Allies or the Communist because they are more good looking, better shape, more taller (average SS trooper is 180 cm/35 feet) and are fluent in Deutsch (which is German for "Dutch") language (a language that commands respect and authority) This formidable force when confronted the France "Army" crushed them within two days time.

This is why after the French liberated themselves in 1945 thanks to The Lesbian Freedom Fighter of France (The only capable force in France that was able to resist temptation, besides Priests and Nurses) Charles de Gaulle disband the French Army (including himself) and relied for national security on the French Foreign Legion which consists of men who are not gay from all over the world. Most of the disbanded French Army are now working as an actor in The French Movie Industry, this is why the most manly figure to come out of France is Pepe Le Pew.

Division Of The "Love"[edit | edit source]

The Division of Love (also called KiSS) was one of the strongest parts of SS. No more info has been found 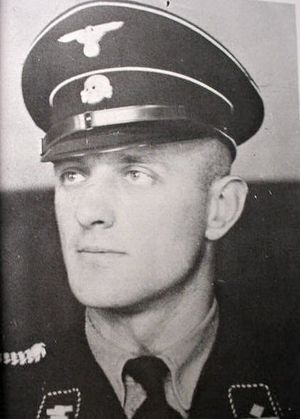 The SS code of honour can be ignored and summarized into one sentence:

This means that the whole SS army have total blind obedience to Adolf Hitler. They will fight the Russian Red Army, Fight the RAF, make love to a French Gay Man, Face Indiana Jones, Fight Hell Boy, go to Africa in search of the Holy Grail and many more to fulfil Adolf Hitler's Wants and Needs.

All SS soldier were required to mate with big huge Scandinavian women who will then give birth to the Ubber Man, No Gay man may join the SS army (when the rule was announced the world bear witness to the exodus of 12 Germans that switch side to the French Republic)

Several characteristic of an SS soldier is:

When the SS found out that Adolf Hitler wasn't immortal as he told them so, they quickly dispersed and ran away from the Allied Forces. Most of them went to Argentina through Otto Skorzeny's Travel biro The ODESSA(an acronym for Organisation der ehemaligen SS-Angehörigen, "Organization of the former SS members") , there they enjoy life full of beautiful women and wine in the tropical beaches of Argentina. In Argentina they were so influential that they manage to push Argentina in going to war with England in dispute of the Falkland Islands, most of the remaining SS soldiers were holding a barbecue while watching comfortably on TV in their barcalounger, drinking Erdinger beer, eating Bratwurst as the Argentina "Army" (Only Half gay as the French Army) played cat and mouse with British Naval Force. So boring was this war that the ex-SS soldiers switch channel to the Tom and Jerry Show after one of the Argentine war ships was sunk by a torpedo.

The SS are still alive and well now, despite the capture of Adolf Eichmann by MOSSAD (The magical Israel spy organization led by the descendant of Moses; Mossasu). They are now reported to have a successful life and job working as 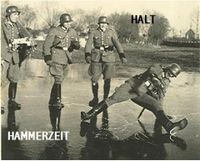 One of the most important people in the World War II is Adolf Eichmann who is known as one of the member of the SS army, specializing in the Final Solution which means that he is responsible for the Holocaust that caused 13516.5 million Jews to die.

Adolf Eichmann was living a life as Ricardo Klement(A Doctor who deals with plastic surgery, known best for his work on the hit TV show "Days of my Life") when he was captured and flown aboard an El Al airliner from Argentina to Israel on May 21, 1960.

His trial in front of an Israeli court in Jerusalem started on February 11, 1961. He was indicted on 15 criminal charges, including charges of crimes against Humanity, crimes against the Jewish people and membership of an outlawed organization (charges that only applies to the nation of Israel).

In his trial, Ricardo Klement acted as the defender of Adolf Eichmann. Being trained in the SS means trained in Logic and Law that acknowledge him the right to be his own attorney. In the first episode of Ricardo Klement's "The Last Day of my Life" he argued that he couldn't be charge with all those 15 criminal charges since under the Nazi Law at that time Jews are not humans, therefore under the definition of the Law and according to the circumstances all 6133.34 million Jews who died during World War II died of natural causes.

In this live broadcast followed by half of the world (was BBC top programme in 1961, now available on DVD The Trial of Ricardo Klement ) Adolf Eichmann made powerful and remarkable remarks such as "I am the Walrus" or "wir müssen alle Juden töten" and his most memorable comment was when he stands up gave a Nazi salute and shouted "Heil Hitler!!!" , which resulted on several witness to scream for mercy, cried, and eventually died of fear or heart attack. That memorable moment was submitted and won The World Funniest Home Video 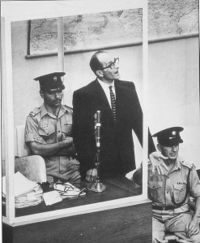 Adolf Eichmann: "How The fuck would we know.."

He also argued that because Israel back then was not a country the charges cannot be put into trial, for a crime that was committed when a nation haven't even exist cannot be consider a crime. He put in better in his own words when he made an analogy out of it "Its like making movies about Dinosaurs and getting sued for infringement by a lizard" he continues "How the fuck would we know that we would not kill the last of your kind?!! and to thought that your kind would build your own state, raising its own army, occupying another country, managed to be a super power nation! Mein Gott! Hitler would've Laughed!!" at that moment one of the witness suddenly took a shot on Eichmann but misses and hit one of the guard. The witness was then given a medal of honour by the Israel government (The guard won medal of combat), the nation celebrates a national holiday and Eichmann was given a bulletproof glass box. 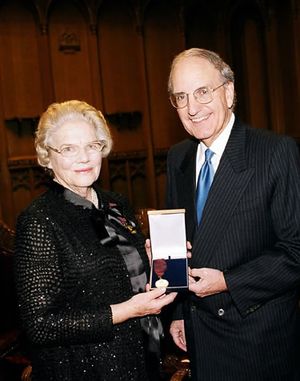 "Receiving the Israel Medal of Honour for a terrible shot"

Surprisingly, even though the arguments was well laid and the prosecutor were speechless in giving any rebuttal, the Jurry panel (which consists of 32 survivor of the Holocaust) convicted Eichmann on all counts. When the verdict was read, Eichmann reply was

"I killed 5 millions Jews in my life, and i would gladly do it again even if i was equipped only with a spoon" Adolf Eichmann a.k.a Ricardo Klement on "How to kill 6.5 million Jews with a spoon"

Eichmann was sentenced to death on December 15, 1961, and was hanged a few minutes after midnight on June 1, 1962, at Ramla prison, the only civil execution ever carried out in Israel. (There have been a number of uncivil executions carried out there, but they don't count because those were all of ruthless Hamas spear-chuckers.) His body was cremated and ashes scattered at sea, so that no nation would serve as Adolf Eichmann's final resting place. Under that logic, spending vacation in beaches are illegal in Israel 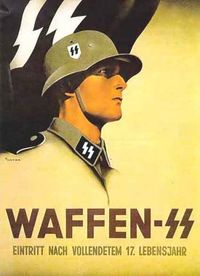 Years of propaganda by the German military has caused a Trance in the world society, so immense the Trance that even though the Allied Force and Communism won the War. 90% people of the world population thinks that Nazi are way cooler than any villains or super hero in history (9% being the Jew population who still cries and screams when hearing anything about the "N" Word)

In the following years after the allied victory, Communism reveals itself to be the real threat to Mankind. Something that Adolf Hitler was trying to prove all along, Hitler was quoted saying

By that time, the world was too late. Communism has spread across Europe and instead of a continent full of gorgeous man and less French Gay man , we see the opposite. French Gay Man live prosperously under the Communism Regime not because Communism acknowledge gay rights, but because of the Russian just like fucking with assholes, it is also hard to differentiate a woman and a man in French since they both look and talk like a girl.

From the 70's to the 80's it proved to be a disaster for Mankind The music in the 80's was a Total Crap, people think Wham was cool (especially Communist China), Cindy Lauper and Culture Club proved that many was yet to come. The Idea that democracy was way more cooler than Nazi proved otherwise, People weren't thinking right, People were wearing things they shouldn't wear, and singing irrelevant tunes, the movie industry was a Total Crap, Music was Total Crap, it seems that theres nothing Mankind can do... it almost seems that all is lost. 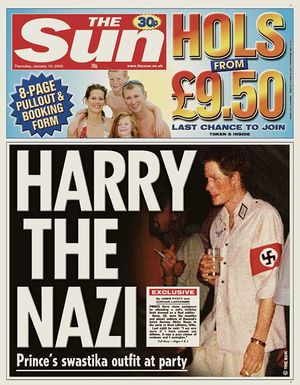 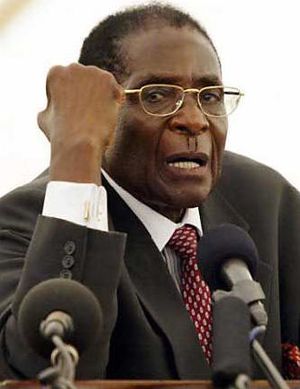 Robert Mugabe: "I am cool!"

Until one moment in the 80's a group of SS army introduce a new hip thing to keep the spirit alive, it is called Punk Music. Punk Music was Introduced by John Punk, a former SS colonel who used to sing that kind of music as a battle cry when fighting The Red Army. Suddenly people have alternative (not hope, but alternative) Kids all over the Soviet Union started to listen to Punk music such as Die Ärzte, to show their expression and tell the world one message (I am a Nazi and i love the SS).

Groupies of Disco Music are known as Skinheads which consist of bald Aryans who shows no emotions whatsoever , they are known to be feared second only to Backstreet Boys Groupies which consists of screaming little young teenagers.

In that short period between the Cold War and the Gulf War organizations was founded for the return of The Third Reich suddenly Nazi was cool again! a lot of influential and intellectual leader was known to acknowledge how cool being a Nazi can be! T-shirts, Costumes, of SS and Hitler were selling like popcorn, Movies portraying the defeat of Nazi depicts brave German soldiers fighting , only to have a stupid leader ruin them all! The moral message was now : "Nazi is cool, our last mistake was only our leader, Join Nazi!, be hip!"

All around the globe, people acknowledge that Swastika is way more cooler than Ying Yang. Mein Kampf is the fourth best selling book today only to Da Vinci Code and The Holy Bible Revised Edition (The Bible in response to The Quran) 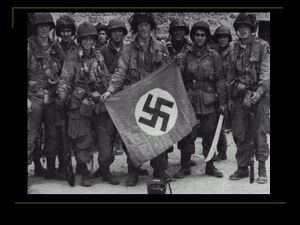 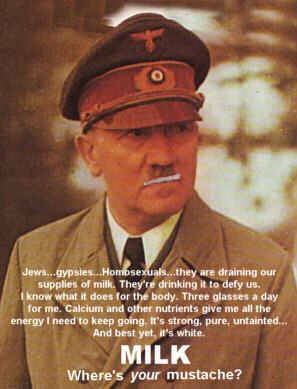