From Uncyclopedia, the content-free encyclopedia
Jump to navigation Jump to search
MAGIC 8 BALL
Not A
Chance
“Don't count on it.”

~ Migic 8-Ball on you getting laid

“It is decidedly so.”

The Magic 8-Ball, long considered one of the best management tools on the face of the earth, is a state-of-the art decision making device cleverly disguised as an 8-Ball. This way, people cannot mistake Magic 8-Ball owners for obsessive-compulsive maniacs upon seeing them owning such a machine, instead thinking that they are pool obsessives. The Magic 8-Ball functions cleverly, with a die with up to fourty-five sides and a predicton printed on each inside its hollow spherical outside. Such a success in the field of design has inspired countless other inventions, such as the bus, the stereo speaker and the pipe bomb.

In it's infancy the Magic 8-Ball had only a six sided die that would dole out its prophesies with uncanny accuracy. The original six answers were;

2) Outlook not so good

3) Not even with your dick

6) Get you some of that (Later shortened to GYSOT) 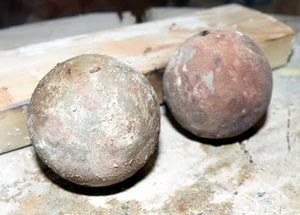 Early designs of Magic 8-Balls were heavier but no less accurate.

These six answers dispensed all the wisdom of the entire airline industry for nearly 80 years as Managers relied on the Magic 8-Ball's words of wisdom to quickly make important operational decisions that they themselves were not remotely capable of making.

One of the more compelling arguments for the Magic 8-Ball's accuracy can be traced back to 1959 when the airline industry was forced to make a major decision regarding the transition from props to jets. With many companies very lives on the line, managers were faced with deciding on the old tried and true props versus the new and untested jets. The choice was clear and the Magic 8-Ball was brought in. With much pomp and circumstance every manager with every airline jammed into a small confrence room at a Motel 6 and one of the hookers (who's name is unknown) was asked to do the honors of shaking the Magic 8-Ball. With much jiggling of the jumblies, the Magic 8-Ball was shaken in a counterclockwise motion then rolled onto the table. As it came to rest on the table a hush fell upon the room, not a word was uttered for those tense 30 seconds until the Magic 8-Ball dispensed its prophesy.

As each manager looked nervously around the room for a response to the ambiguous answer, a lone voice spoke up, So we use jets, right?

An agreeable roar erupted from the confused managers as they had their answer, and they owed it all to the power of the Magic 8-Ball.

With Americas entry into WW II the Magic 8-Ball became even more important in the day to day decision making process for the airline manager, and along with its new importance came the first change since its inception. No longer content with just six answers an enterprising young man named Reinhart Wolfcastle came along and introduced a new and improved Magic 8-Ball that he unveiled at the annual airline/hooker convention held every year in Chicago.

With this new and improved model, not only were the answers upgraded, but an eight sided die was added giving the airline manager more detailed information than ever before. The 1943 model was as follows;

2) Not today, ask me tomorrow

4) Not in my lifetime

6) God has ordained it as so

The new magic 8-Ball came as a god send to many incompetent managers as they struggled to come to grips with the rapidly changing economy and the post war economic boom. Now, such ridiculous questions as, Gee, Golly sir, I have been working here for 3 years without a raise, do you think I could get one? or Hey boss, John just got run over by a tug, what do we do? were answered with just a shake of the Magic 8-Ball.

The Magic 8-Ball and the Jets[edit | edit source] 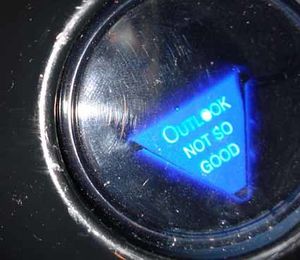 The 8-Ball's skillfull wording of its answers has been praised.

With the entry of Jetliners into the Airline Industry, the Magic 8-Ball experienced a complete overhaul as the answers developed from the 40's no longer seemed to apply. A young engineer, Werner Von Braum came up with the Baby Boomer model in 1962. With the new model came new innovations, the 10 sided die was introduced as well as a thicker mucus like substance was used to suspend the die and give it more randomness as well as hiding the answer until the very last second. Airline industry managers hailed the new model as it yielded them even more power than ever before. The new and improved model and its ten answers were;

2) Ask me that question again, I'll have you killed.

4) Death would be easier.

5) Does the term "When pigs fly" mean anything to you.

7) Get a haircut and shave off those sideburns.

10) Can you suck a golfball through a garden hose?

The new model was an instant success as it increased management salaries and bonuses while crushing the will of the hourly workers, but by the mid 70's the Golden Years of the Magic 8-Ball were coming to an end as the industry began to change and evolve faster than ever before. 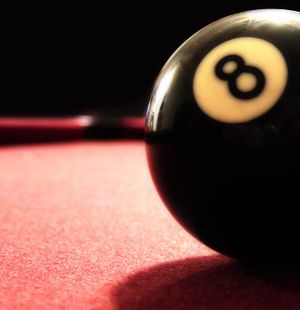 Is this a Magic 8-Ball? No, it's a real 8-Ball, but the magic version looks similar.

As the airline industry entered deregulation and workers began to yield more power, it became clear that the Magic 8-Ball needed a quick overhaul. With moral and hourly pay at all time highs, airline management needed to do something and quick, thats when a name from the past surfaced to bring his knowledge and wisdom to an industry spiraling out of control.

Hailed as a Messiah, a man known only as "Spock" surfaced to revamp the Magic 8-Ball. Leaving the design as is, Mr. Spock changed only the answers to fit the times;

1) Drug test this one

3) You're fired and we are pressing charges

5) That depends on how much money you have on you.

6) What are you, a fucking retard?

9) Well, they told me you would ask that. What did they tell me to do again?

10) Last person to ask me that was, aaahhhh, I can't recall anyone asking such a stupid question.

As you can see, the Magic 8-Ball became a sort of problem solver when it came to personnel issues.Unfortunately, the 80's morphed the airline manager into a personnel manager as they moved away from the daily operational issues to handling an ever increasingly complex and knowledgeable base of employees that created a need for a more negatively influenced Magic 8-Ball.

As a new millennium approached, the airlines were making obsence profits, employees were paid more than ever and managers were nothing but a passenger being driven around by the real people in charge, the employees. It was at this time that the Magic 8-Balls ability began to be questioned. In 1998 it was decided to change the Magic 8-Ball for the last time, but instead of propelling it into the limelight as it always had before, this change was the death knoll for this tried and true management tool. Instead of using a single individual to redesign the Ball, a consensus of airline managers was used to design the Magic 8-Ball for the 90's, (Which explains why it failed, those retards could not find their ass in the dark, more less come up with a effective management tool.) 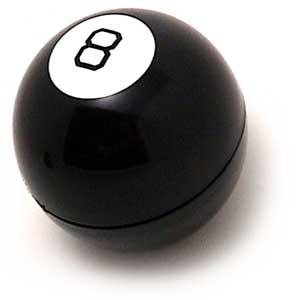 The modern Magic 8-Ball, looking sadly into the distance and wondering what it has become.

For the final change the managers went back to a six sided die and used Holy Water for the liquid medium.

3) I didn't suck my way this far for nothing.

As you can see, the Magic 8-Ball no longer yielded the answers necessary to maintain a corrupt infastructure. Faced with using their own management skills the Magic 8-Ball became nothing more than a Ambulance chaser's dream. Weak answers yielded a gold mine of lawsuits by hourly employees that only stopped with the tragic events of 9-11. With the industry in turmoil and the government watching, the Magic 8-Ball was phased out for good. With the Magic 8-Ball gone and management forced to think for themselves the industry was crippled and incapable of sustaining themselves, it was during these desperate years that new high tech management tools were tested in the hopes that one would emerge as a replacement to the now retired Magic 8-Ball.