For those without comedic tastes, the so-called experts at Wikipedia have an article about Tarot. 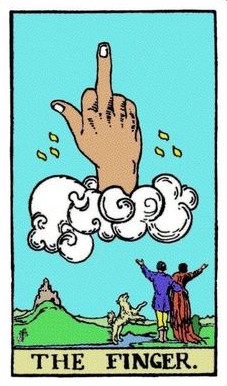 The Ace of Hands represents personal freedom and a time to rejoice.

Some say that Tarot is a system, others say it is only a game, and the rest say they don't care and simply find silky-soft tarot cards to be great for playing Texas Hold 'Em.

Welcome to the Numinous World of Tarot, the Mystical System[edit] 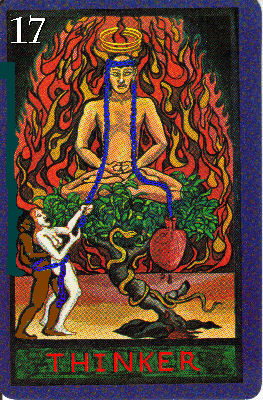 17:Thinker, accurately depicts the act of falling in love.

Re-Discovering the True Essence of Tarot[edit]

You won't find it in the dusty tracts of the 18th and 19th century French occultists à la Etteilla Barber, Wirth, Papus, and Napoleon. Their works and words are misguided and bear no resemblance to the True Essence of tarot. They know nothing of Life and its Spirit.

Benefit from my errors and experiences: The one only sure Way is to seek out and find an Illuminati to be your pupil-master, to lead you by the hand out of the proverbial Platonic cave of darkness. Get thee to a coffee-shop, look for someone who looks like they drink too much espresso in a day, and odds are, they're an Illuminati to illumine you out of the darkness. However, make sure that they're not an Illuminati newbie; that's worse than reading the French occultists. Or, you could just get high.

Uses of Tarot in the Aquarian Age of Tarot[edit] 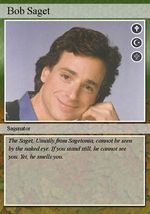 Acceptable use for (re-)discovering the True Essence of tarot according to the Highest Illuminati: 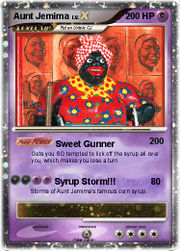 The Aunt Jemima card is not included in all decks.

Unacceptable Uses: (Not recommended, but listed here for completeness, as this is Uncyclopedia, dude)

For those without comedic tastes, the so-called experts at Wikipedia have an article about Tarot (game).

Welcome to the Wonderous World of Tarot, the card game[edit] 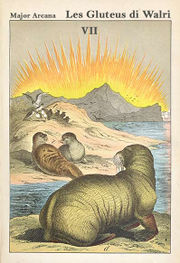 Tarot is also a collectible card game created by Dick Garfield and later bought by the company Wiki Wizzards in 1994, which was purchased by Harpo in September 1999. Tarot 'magic cards' inspired an entirely new hobby genre and has an estimated six million players in over three countries worldwide, as well as a successful Internet version. Tarot is a strategy contest that includes an element of chance due to the random distribution of cards from shuffling. 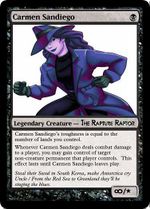 WTF??? These aren't even tarot cards. Where are the real card pics?

Each game represents a battle between powerful wizards called "Master Batera" or "Jane Hobbits" who use magical spells, items, and fantastic creatures to defeat their opponents. The game has an official tournament system, called Tarrochi, with tournaments having been played on all three continents, including Antarctica. The cards themselves are valuable, much like other trading cards, but in the case of tarrochi, a card's value is primarily based on its power and utility in game play, not just its scarcity and other intangible aesthetic qualities such as the quality of its artwork, as tarot cards are designated by various types and colors. 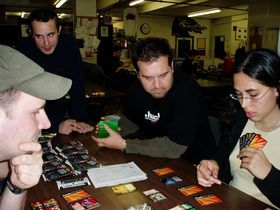 Things get heated at Tarrochi Tournaments

In a game of Tarot, two or more players are engaged in a duel. A player starts the game with twenty life picas and loses when they run out of life picas. The most common method of reducing an opponent's life is to attack with bad breath, although numerous other methods exist. In addition, some cards specify other ways to win or lose the game.

Players duel each other by casting court cards using mojo, or sexual energy, typically drawn from minor arcana cards. Spells can have a single, one-night effect, set up a lasting magical enchantment, or summon a beast to fight for its player. More powerful spells cost more mojo, or even other resources such as a player's own life picas or rings from their hand.

Some spells have effects that override normal game rules (e.g., allow a player to play more than one trump per turn). The so-called "Golden Shower of Magic" is that if a card's number is higher than any other player's card, that player may automatically golden shower the rest with magic. Resolving interactions between conflicting spell effects is one of the more difficult aspects of game play. A detailed Tarot rulebook exists to clarify these conflicts. 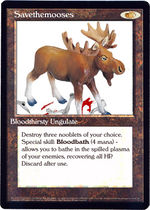 Ronald McDonald and the Tarot[edit] 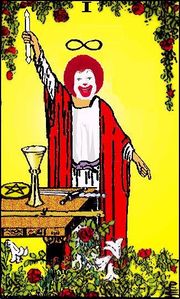 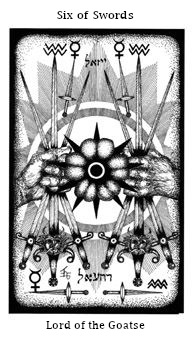 The six of swords, Lord of the Goatse signifies transitioning towards a new phase.

For a short time in Japan, Ronald McDonald was a tarot card reader operating under the pseudonym "DONALDO" He gave up his tarot reading practice and renounced his New Age views on religion when he discovered that tarot cards were originally made for games. He now thinks its more fun to play card games with tarot cards and has become the tarot game movement's most well known spokesperson.