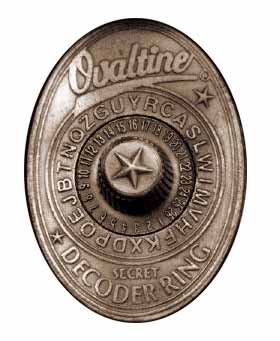 "Artist's Impression of the Ring"
“That damn thing is the reason we have a trade embargo with the US. Fucking cereal boxes.”

“One time, I got not one, but two decoder rings in a cereal box. Best fucking day of my life.”

The Magical Decoder Ring (not to be confused with the One Ring) is a magical device that allows the user to read any language, see into the future, use mind bullets to vanquish his foes, know exactly what lines to use when picking up a chick and understand the inner workings of the microwave. It is believed that the Ring has many other powers, however these uses remain undiscovered due to the curse placed on it by it's original owner Pharaoh Queen Tixilix Hamburger-no-pickles Valentinez Blue Stradivarius Pierre George Geldof Kaiser the Third the Second. Research continues in Dole office labs.

Found by the great archeologist Indiana Jones Junior, in Moldovia in the year 1890BC the ring is believed to be between 3 weeks and 3002 years old. Based on the studies found after his death it can be assumed that it was created out of bat guano forged in the fires of heck by the great god known only as Gosh. Research shows that Indy(as he liked to be called by the ladies) first used the ring to find out the winner of the 2024 F-Zero Grand Prix. He then attempted to travel through time, but was stopped before he could by renowned archeologist Dr. Daniel Jackson, who in a vicious fight to the death defeated Jonesey(as he liked to be called by the ladies) in unarmed combat. Jackson stole the notes and escaped to Stargate Command, where he used the ring to decipher the Stargate.

After many years of adventuring through the gate, fighting over-dressed bad guys, and porking hot chicks in leather, Jackson retired to the Temple of Rah, where he ruled over the people for 1000 years. Following Jackson's death, scientists on a dig in Sweden found the temple, in which they found a cache of notes and a box containing the ring, and some roach clips. The scientists were disappointed to find that he had left no doob, but they had their own and sat in the chamber for 3 days getting high and reading the notes, giggling as they went. Sufficiently sobered and tired, the scientists returned to Ireland where they continued research with Dr. Jacksons notes, and a half ounce. According to Jackson's notes, he had found another use for the ring, the aforementioned ability to pick up any chick (thus making him the first scientist to ever have sex). Intrigued, research continued, one of the scientists found the ability to use mind bullets, this drove him insane, and he destroyed the lab before turning his bullets inwards. 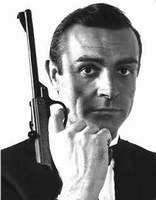 Thankfully, the ring survived the blast, along with a young scientist Sean Connery who was out at the time, getting munchies. Taking the ring, Connery travelled through the Stargate to the planet P3X-675.9(P3X-676 rounded up) where he lived and studied the ring for 4 weeks, coming out of his exile, he returned to Earth. Deciding to use his powers for good he became James Bond ,taking over from the previous Bond Oscar Wilde he began travelling the universe, ridding Planets of evil, and porking chicks. His adventures were later chronicled in the documentaries "From Ukraine With Lust" and "Dr. Maybe Later". Retiring in 1972, Connery entrusted the ring to a young Batman, Batman's conjoined twin Bruce Wayne worked on reverse engineering the ring for the Justice League of Justice to use in their fight for Justice, many prototypes were developed, none rivalling the power of the original however. After the League disbanded in 1882, citing artistic differences, the rings were sealed away in Barbera Streisand's vagina, where they are still believed to be. The original was donated to Liverpool as a gift from Batman, where it remains to this day.

-Curse engraved on the Ring

The Curse of the Ring is a legend that goes hand in hand with the story of the Ring, many scholars believe it to be pure allegory, the most widely accepted theory being that the greed of the user is what consumes them, and not the curse. all right minded christians, however, know this to be pure pish-posh, the Pharaoh Queen Trixie Dixie Hamburger-no-pickles Geldof, in league with her High Priest The Pope, conspired to curse the ring, so that none may own it for long without having to pass it on, destroy the ring, or die. Getting down and dirty, they danced through the night, stopping only to snort more coke and chant at the ring. The ritual done, the ring was sealed away in the Queen's intergalactic freighter the Millenium Falcon where it remained hidden for the duration of the Star Wars, after which it crash landed on the planet Earth, the Autobots used the Falcon as their base of operations for the duration of their stay on Earth, before leaving it, on top of that Hot Rod left the bathroom lights on and the ship slowly drained of power until the sheilds deactivated and the ship remained undefended for years until Jones found it.