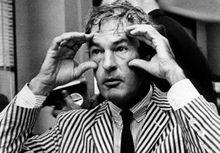 Timothy Leary was a well-known clairvoyant.

Welcome, we've been expecting you and knew you'd be late. We knew that you'd get a pimple on your face today and also knew that it would distract you while driving. Had you called ahead to say you'd be late, we would have told you about that speed trap you got caught in. Here, have a seat.

Now before we begin, we'd like to have you empty your mind of all preconceptions, and imagine yourself in a state of perfect calm. A state in which your mind is free of all worry, doubt, and hesitation. Yes, like the after-party last night. Yes, we do know what was in your drink and how many frat boys were involved, but let's save those questions for later. Right now, just breathe. Let your chakras align. No, that's not a lewd suggestion, it's metaphysics! Sorry, didn't mean to lash out. Breathe. That's it. Now we shall tell you why you are here (on this page, simp, not the seat... nevermind, let's just get this over with.)

Clairvoyance is ability to see into the future and predict who gets what, where it is, how they are going to get it and why its there for them to find in the first place.

Those who have the gift of Clairvoyance are called a variety of names including Seer, Medium, Gypsy, Kook, Shill, Hoodooer, Madam, Prophet, and Dione WarwickDione Warwick. Mother MarcusMother Marcus, Canoga Falls' leading pyschic does have inner sight and faithfully predicted that she would be out of work once Carol Burnett went off the air. John Roberts (Supreme Court Chief Justice) claims to have inner sight, but he asks too many questions and hasn't been accepted into the Society of Yesterday's Tomorrows Today (but he preordered the Super Secret Decoder Ring last Tuesday and is being fitted for a tinfoil hat as we speak. You see, we do know everything. That will be $39.50, cash only please.)

"Its a dangerous game you're playing"[edit]

In late 1990s, The United States of America came under the spell of one Miss Cleo, a clairvoyant that spoke in an authentic sounding Jamaican accent who invited insomniacs to “call me now, child.” One of those people, up late and jonesing to talk to someone friendly was Texas Governor George W. Bush.

By 2000, Miss Cleo had moved into an office adjacent to the Oval Office, leapfrogging over such Bush confidents as Karl Rove and Karen HughesKaren Hughes, to become the President’s most trusted advisor. Of Miss Cleo Bush said "She uses small words that I can understand and she seems to know about immigration, Drug Enforcement Policy and Voodoo that I do."

In 2003, Miss Cleo predicted that someone close to the President was about to leak the name of Valerie PlameValerie Plame in a conversation over chai tea to Washington PostWashington Post senior correspondent Bob WoodwardBob Woodward. She made the same prediction to CNN’s Robert NovakRobert Novak, with one exception; this time the leak included not only Plame’s name, but her top secret position as the wife of Ambassador Joseph C. Wilson thus breaking her cover of being a CIA operative. Miss Cleo also also disclosed her knowledge of Wilson’s preference for chocolate cake over yellow cake.

As her machinations began to unravel, and it became apparent that Novak might unveil her as the inside leak to Special Prosecutor Patrick FitzgeraldPatrick Fitzgerald. As a last ditch attempt at hiding her involvement in matter, Miss Cleo sent Novak a freshly cut pig's snout as a warning to squeal on her, hypnotized I. Lewis “Scooter” Libby to admit that he knew nothing, but that the Vice President wanted him to take the fall as a sign of loyalty to him, and performed a ceremony that produced a giant boil between the eyes of Fitzgerald to distract the American people while he announced the indictment of Libby and the still pending investigation of Miss Cleo.

Miss Cleo’s house of cards collapsed on October 30, 2005, just as she had predicted when her mangled body was found in the White House East Room, by Vice President Richard Cheney with a candlestick .

This makes the article more aerodynamic, and thus more maneuverable at high speeds. Take caution and carry a first-aid kit at all times if you don't know that Maxim kills Rebecca, the colonel and Rosemary are actually Metal Gear Arsenal's AI, Locke's dad is on the island the Bride's real name is Beatrix Kiddo, and her daughter is alive, Kreia was a Sith Lord and only Atton and the Disciple saw that coming, Nibbler pushed Fry into the freezer, Brandy Alexander is Shannon's brother, Curly Brace gives you her air tank after the core room floods, and Soylent Green is PEOPLE!!!

Those who have inner sight use many tools to look into the murky mists of the as-of-yet and attempt to see what is beyond said murky mists. The most successful prop to date is the common handkerchief, which many mediums will use to clean their glasses of murky mistiness. Once outer sight is restored, they will utilize various methods (tricks, cons, or sleights) to convince their audience (dupes, suckers, or pigeons) that they have the ability to peer beyond the real murky mists of uncertainty. These methods include, but are not limited to:

Here are the days foretellings:[edit]

(Yes, we do know the "foretellings" for tomorrow as well, but as you've only paid for one session, so we are contractually bound to remain "in the now.")

User:Martha Stewart Whatever you do, do not reach under the Guinnea Hen in third nest on the right-hand side lower level at Friday noon. If you do, you should first consider if you're prepared to go through life as a one-handed knitter.

User:Pygamylioness: At four PM the zipper on your slacks will break from stress and strains and no one will have any safety pins that you can borrow until Monday.

User:Rosie O'Donnell You will decide to not wipe yourself or wash your hands today but will shrug it off and think who' know. Notice how Joan Rivers doesn't shake your hand - she knows.

User:225.48.0.210 Your keys are under the doormat as usual - but not under your doormat since you were quite pissed when you left home yesterday. Instead, try to remember whatwashername, and you'll find it right there.

User:Deathwish No, you are right. It is not yours. It is User:Whaddayaknow's. She hasn't told him yet, so you might take revenge on him by suprise. But please, don't. It will be quite messy. I have foreseen the sticky pictures in the tabloids.

User:235.111.34.125 No Quick as a lightning didn't win. I wished you should look through me - or at least - my intension was to make you wish you should have looked through me. A horse with such a name never wins - no matter what tip straight from the horse's mouth you get. U see - I don't give out hot tips on races I bet on myself. But thanks for helping me raise the odds on Lord Sleepy.

User:Splaka. Hi there. Don't hesitate too long on NRV-tagging this page. U know, 7-Eleven has this name since it really closes at eleven. Hurry up, you have 5 minutes left. That PC magazine won't do the job, it has too stiff glossy pages.