Parts of this page were originally sporked from Wikipedia's article on Phrenology. 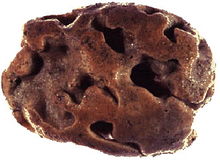 Caution must be exercised during the phrenological examination to prevent irreversible damage.

Phrenology (from Greek: Íōmρ, lump and fφηδl!πg, fondling) is the science of determining character and personality traits from the shape of the head (fondling "lumps"). 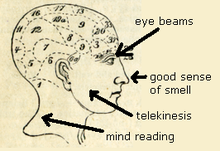 The Illuminati secrets of Phrenology, unveiled for the first time

The principles of Phrenology are that bits of the brain perform different mental faculties. Lumps in parts of the skull indicate a lumpy brain, and thus the individual's propensities in these areas.

Phrenology Now (Things that go bump in the night)[edit]

If you feel someone feeling your head at night when you're sleeping, it's perhaps your mate checking out your lumps to see if you're loyal. However, if you feel someone poking around your head and you live alone, be very afraid: information is being collected about you, possibly by the Culinary Institute of America.

Women interested in finding out about more than their prospective partner's brain may be interested in phrenology's sister skill, phallology.