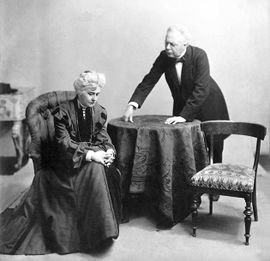 "Where are my crystal balls Miss Givings?"

Occult means hidden, or secret-- thus its lack of a respectable online presence. In real life absolutely nothing is known about the occult. This was not the case, however, before the year 1888 when a mass of misinformation was released into the public domain by organizations such as the Hermetic Order of the Golden Dawn and the Theosophical Society. Before then, many people enjoyed the prestige of developing super powers and traveling instantaneously to other dimensions. 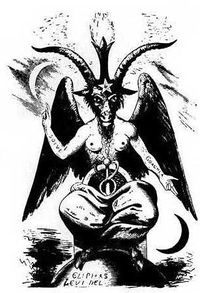 Occult n00bz often credit Aleister Crowley for inventing the occult, but this is because they are stupid and will believe anything said by some guy in a black robe and a polka-dot bowtie. Many also harbor extreme resentment towards Christianity because if its denouncement of the occult. The truth is that the history of religion coincides with the history of the occult, and the only reason the occult is popular among teens and heavy metal bands is because of Christianity's labeling of occult practices as anathema. This concept is obvious when considering other things shunned by the church, like rock and roll, premarital sex and blogging.

The corresponding histories of religion and the occult are a direct result of religious leaders requiring a depository for new material still in the works. Prophecies, axioms, laws and universal truths that required additional polishing and dumbing down for the masses were traditionally dictated to a scribe who would keep them sealed until the time came to either update or discard them.

Similarly, other forms of occult, or esoteric, teachings come from the "off the record" remarks of religious leaders. The most notorious example of this is when Jesus, during his Sermon on the Mount, muttered "in bed" after each of the statements of the Beatitudes (i.e. "Blessed are the poor in spirit: for theirs is the kingdom of heaven. [In bed]."). Another example comes from the book of John where Jesus is known to have said, "I am the way, and the truth, and the life; no one comes to the Father but through Me." The esoteric addition to this statement clarifies this quotation that is central to Christian doctrine by revealing that Philip, one of the Twelve Apostles, remarked to Judas, "Why does he always say that when he's drunk?"

Gautama Buddha and Muhammad were also known to give many off-colour remarks to their scribes that were not meant to be recorded, mostly because they were simply inside jokes between themselves and their close friends. One such joke included a running gag between Buddha and his scribe which included random references to a "sexualized breast sandwich". Quotes such as, "Do not dwell in the past, do not dream of the future, concentrate the mind on the present moment" were often followed by, "and while you're at it, make me a sexualized breast sandwich." 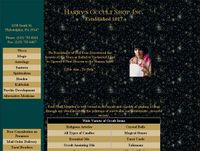 Starry backgrounds are a staple of any occult website.

The occult has no official online authority, but many amateurs (mostly metal-heads named Azreal, goth vampire wiccans named Azreal, or middle-aged moms named Sylvia) have taken the initiative by making websites about all things occult.

This one has it all.

Many things distinguish occult websites into a category all their own. The first thing to look for is if it looks like it was created in 1992 and hasn't been updated since. This can be seen by the use of animated GIFs such as rotating pentagrams and flaming swords. Tacky frames, unhidden table borders and a lack of CSS formatting are other things to look for in the actual HTML coding of occult websites.

Another staple of an occult website includes a dark background with stars, nebulae or a cloudy moon. Other popular patterns include marble, wood, parchment or sand. These are usually accompanied by Egyptian symbols, rainbows or some type of bird.Besides black and red, there are a few other colour schemes many occult websites adhere to. White and teal is a very

Animations are so bad ass.

popular combination, tricking visitors into thinking they are actually visiting a website for a Pentecostal church from 1997. Another widely used colour is purple, or periwinkle. This may be influenced by its favour with the online goth community for its symbolic reference to self-inflicted bruises or because of the creation of the Church of Periwinkle. 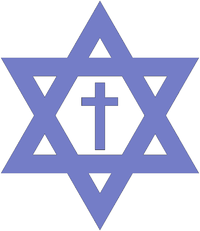 The logo of the popular cult the Church of Periwinkle.

Since 99% of occult websites are hosted on Yahoo or Tripod servers, they will never go away, but for the same reason they will also never be accessible.

For those without comedic tastes, the so-called experts at Wikipedia have an article about Occult.
Retrieved from "http://en.uncyclopedia.co/w/index.php?title=Occult&oldid=5830863"
Categories: