From Uncyclopedia, the content-free encyclopedia
(Redirected from Egyptian)
Jump to navigation Jump to search

An interview with an Egyptian taxi driver is part of

It's another sunny day in Cairo, an idle taxi driver standing by his car is approached by a good looking American female reporter..

Reporter: Do you speak English?

Reporter: Do you mind if I interview you? 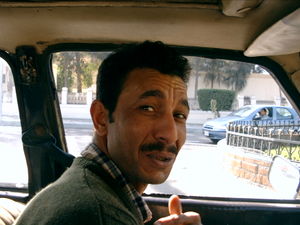 "Mubarak is a strong brezident. He is leadar airoblane. He doesn't wear women dress? Who said zat? Who send you?" Mr. Boozoo elaborating on the Egyptian political system

Egyptian: Interfiew?! (narrows eyes in distrust) you mukhabarat? I didn't do anysing! I am good Egybtian! I did not show za photo of za brezident wearing dress!

Egpytian: Oh, you no mukhabarat? Nevar mind. Forget I say anysing about za brezident in dress. He is very man.

Egyptian: Yes blease. You want to do in taxi? It's very nice. Nearly has air-condition and za chairs are camel lezar.

Reporter: (sweating profusely) Oh no! I mean male or female. And what on earth is "nearly has air condition"?

Egyptian: Zis is what I said! Brobelor! What? You can't speak English?

Reporter: Understood, so this is your near air-condition? 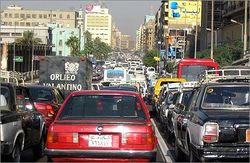 Reporter: Ahem. So, how do you find life here in Egypt?

Reporter: Well, other than the nice weather and such, what else do you like about Egypt?

Reporter: No, I mean do you have a job?

Egyptian: (Looking around and whispering) Jobbat meen ya madame? No I don't have any jobbat.. Lessa mastabahnash.. Do you have job wiz you? We can esmoke it in my car. Don't worry about bolice. [2]

Reporter: (yelling) Oh my God! I mean, DO YOU WORK?

Egyptian: (also yelling) WHY DO YOU SHOUT! I HAVE BAD EARS! I HAD A BIG EXBLOSION NEXT TO ME AT ZA WAR WIZ ISRAIL!

Reporter: (seems ashamed) Oh, sorry, I didn't know. Which war was that?

Egyptian: (still shouting) ALL OF ZEM! ZA ISRALILIS BOMB BOMB BOMB! WE GOT GUNS ZAT DO RATATATATA AND ZEIR TANKS DO BOOM! BOOM! AND OUR AIROBLANES DO RATATATA!. IT IS GOOD WE GOT STRONG BREZIDENT! HE IS DEFENDING EGYBT! HE DOES NOT WEAR WOMAN DRESS!

Reporter: (shifts weight uncomfortably) So, DO you have another job?

Reporter: Hmm.. And what do you think about the traffic problem in Egypt?

Egyptian: Very big broblem.. You see? Very much cars.. But za guvurment is tryin to make it bettar, zey did za circle street, za mehwar street, and zey make all streets one way, so if you go.. You cant come back. Nihahahaha. [3]

Reporter: What about the economic problems in Egypt?

Egyptian: I don't undurstand what you say.

Reporter: I mean.. How do you deal with economic problems in Egypt?

Egyptian: What is economic? Is zis food? A new smoke? You want to see the byramids? I show you good time. You sure you don't want to see my brobelor?

Reporter: I mean - do you have any money problems in Egypt?

Reporter: So, do you make a lot of money?

Reporter: Let me rephrase.. Since Egypt is a rich country, do you have a lot of money?

Egyptian: Me? Not a lot, but I eat and drink alhamdolellah. [5]

Reporter: Then where does all the money go? 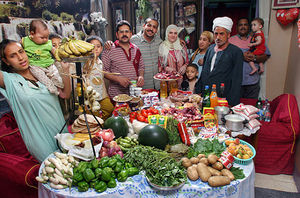 ..."And what shall I tell little Ahmad when...FATMA! Inaal abooki! Hide all the food ya sharmoota!" Getting along day after day in Egypt is not an easy task

Reporter: And what does the government do with all the money?

Reporter: Do you choose your president?

Egyptian: (puzzled) I thought brezidents just be brezident and stay.

Reporter: Oh no no. I mean, Egypt is a democracy isn't it? You need to vote for the elected president?

Reporter: But there are no wars right now.

Egyptian: (shouting) ZER ARE ALWAYS WARS WIZ ISRAIL! ZEY HAVE TANKS ZAT DO BOOM BOOM! WE HAVE AIROBLANES ZAT DO RATATATATA! AND WE HAVE BREZIDENT MUBARAK TO FLY LEADER AIROBLANE. GOOD AIROBLANE!

Reporter: (coughs) OK then, so what about the last 28 years?

Egyptian: I got marry.. And I have Ahmad and Samira.. And I drive taxi.

Reporter: No, I mean, what did Mubarak do in the last 28 years?

Reporter: (sighs) I should have guessed. Well, thank you very much for your time, Mr. Hamboozoo. 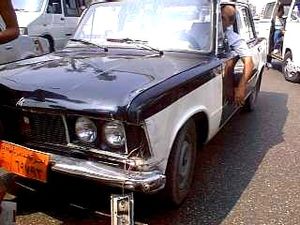 "Come again! I show you good time! We got visit za byramids togezar!"

Egyptian: No broblem, for you only 10 American dollar.

Reporter: I never said I'll pay you for this.

Egyptian: (outraged) WHAT? AND MY CHILDREN?! What will I say to Ahmad and Samira? When little Ahmad cry and tell me - Ya baba, I'm ga'an, get food shall I tell him Eskot yabn elcalb! Za American woman didn't give me money, we don't have food. (wails and hits himself on the head)

Reporter: Mister Hamboozoo! (wails and mumbles in Arabic can be heard in the background) Mister Hamboozoo! (sounds of thumps becomes wilder and wilder) MISTER HAMBOOZOO! PLEASE! HERE! TAKE THIS! (reporter throws a hundred dollar bill at the driver and flees the scene)

Egyptian: (wails stop abruptly) Thank you sister American! You come back yes? I show you good time! Next time I fix my brobelor for you!

Notes (for you non-Egyptian buggers)

This article was one of the Uncyclopedia:Top 10 Articles of 2009

Featured Article  (read another featured article)
Featured version: 4 June 2009
This article has been featured on the front page. — You can nominate your favourite articles at Uncyclopedia:VFH.