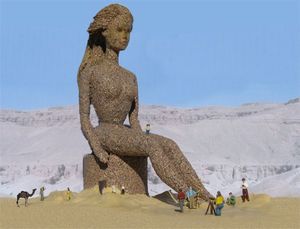 Colossus of Barbie: "That Ramses - he is such a scumbag!"

The Colossus of Barbie is a monument constructed during the Sixteenth Dynasty of Ancient Egypt, probably during the reign of King Piffic of Knossjob. Piffic erected the statue in honor of his mother (or possibly sister) (or possibly both, knowing those crazy Egyptians), Queen Barbie of Egyptian Malibu, Thebes and Luxor, believed to be the daughter of Queen Midge of Lesbos, and her husband (or possibly brother) Ken, King of Kings, Scion of Scions — a direct descendant of the Moon God, Testecles. 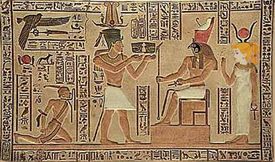 Hieroglyphic of Queen Barbie consulting with her husband, the Fashion God PEZ (seated) on servants, roughly translates into "Ask him if that slave comes in any other colors."

Located on a high plateau overlooking the Valley of the Kings, not far from her mother's tomb in the Valley of the Dolls, and next door to the local Pizza Hut, the Colossus of Barbie is 175 feet in height and 400 hundred feet from the tip of her toes to the top of her head. It was built by the slave labor of two thousand Kens. Constructed of large stone blocks, each weighing 220 lbs., the Colossus contains numerous chambers, including Barbie's Malibu Antechamber and Barbie's Malibu False Tomb. (The actual Tomb of Barbie has yet to be breached, and her treasure trove is secured by a 17-ton sculpture of a maiden's head.) Her face, now worn down by sand and wind, still shows the wisp of a knowing smile, one whose meaning only a woman can understand.

When originally finished, archaeologists believe the Colossus was adorned with sunglasses and a hot pink bikini, probably made of papyrus. When this garment inevitably deteriorated, it is believed that the Royal Family (whose treasury was badly depleted because of the enormous construction costs) was forced to cover the monument in Saran Wrap™ and black spandex. This defilement angered the Fashion God PEZ, who smited the Sixteenth Dynasty with a devastating pox, thus opening the door for the Seventeenth Dodge Dynasty that seated Joan Collins on the throne of Egypt, where she ruled for 2,000 years while studying for the role of Alexis Carrington.

The Archaeological Find of the Month! 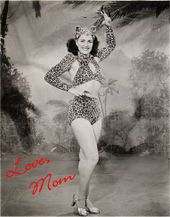 Amazingly, the Colossus of Barbie was never despoiled by roaming hordes of grave-robbers, marauding infidels, or vicious bands of corporate lawyers. According to legend, all would-be vandals were stopped dead in their tracks by the monument's incredibly sexy "hourglass" figure. For a woman almost 4,000 years old, her breasts remain as perky, and her waist as trim, as they were the day they were carved. Her finely-sculptured posterior is still “Barbielicious” and is even said to have been the inspiration for Sir Mix-a-Lot’s 1980s rap hit, Barbie Got Back.

The 1927 discovery of the Colossus by British Archaeologist and Spinster Camilla Towe was quite unexpected. The tweed wearing Towe was returning from a dig to find the buried remains of her aunt's pet kitty when she accidentally stubbed her right toe into the giant Barbie's left eye. Excavation of Barbie began almost immediately, and took over 28 years, during which as many as 18 native workers either broke or severely chipped their nails. It was widely held that the work could have been completed much sooner, possibly even before the McCarthy Era, but workers enjoyed leisurely rest periods which included plenty of volleyball, tanning time, and whippets.

Feeling Not So Fresh

Madam Tussaud's recreation of Queen Barbie in her tired years

Unfortunately, Miss Towe didn’t live to see the Colossus in its recovered state, having been the first person to come under the dreaded Curse of The Colossus, and (not coincidentally) the one to die the most freakishly horrible death.

Six months into the excavation, Towe noted that her camel, Joe, was behaving sluggishly, and was given to fits of scooting on the warm desert sands for relief. According to witnesses, Towe consulted with an old Egyptian man known only as "the old Egyptian man," and then announced that the camel’s rectal anal glands were in need of “expressing.” Never one to let a man doing something that she could do herself, Towe approached the camel, lifted its tail, and inserted her hand into the camel’s sphincter — whereupon the camel snorted (or whatever it is that camels do), spraying Towe with a veritable torrent of anal-gland secretions. By the time the air had cleared sufficiently for rescuers to approach her body, Towe was dead. The camel, on the other hand, survived — its mood greatly improved, and it was back to its old self in days. Unfortunately, however, Towe's treatment destroyed its sphincter, and its gait became a bit distincter.

Since then, when the moon is full (about once a month), the Curse of The Colossus strikes all women who are within one mile of the statue with bloating, cramps, and high-tide.

Look at dat honey chil', dat Archaeologist is workin' it in her nekkid stiff!

Barbie, Queen of Egyptian Malibu, reigned for over 50 years. Ancient hieroglyphs unearthed in the 1960's tell the story of an eternally young and nubile queen, who spent little time on the throne, preferring the company of NBA basketball players. Some historians suggest that she was more interested in trying on new togas and attending special "Barbie-Q's" thrown in her honor than she was in the traditional berating of slaves and waiting for her other brothers to call for a date.

According to a second-story panel found just inside her Hidden Henna Beauty Salon, she also enjoyed floating down the Nile River on her Royal Barge with her best friends. Her attendants were pre-pubescent girls who fawned upon her, brushing her hair and making sure that she was adorned in the latest fashions that Mummy could buy.

At the age of six, she wed the Fashion God PEZ, a half man/half hawk creature shaped like a horse, who doted upon her, coughing up candy as a sign of his eternal love and devotion. To them, one son, Piffic was spawned forth by the Gods. Following the death of King Almond Joy III, Queen Barbie was carried aloft on the shoulders of a thousand Jewish Slaves into Luxor when Piffic ascended to the throne of Eqypt.

Queen Barbie is also credited with introducing Grecian males to the soda fountain, a feature that they quickly incorporated into their bath houses.

Ancient DVD's and videocassettes unearthed late last week near the tomb of Princess Buffy of Alexandria tell the story of a down-on-his-luck boxer who, given an unlikely shot at the World Heavyweight Title, manages to defeat the champ and win back the love and respect of his wife, to the tune of 1980's-era hair metal bands.

Scholars, however, are still puzzled about the popularity of NASCAR races, and hope to one day find the secret to this vexing conundrum. 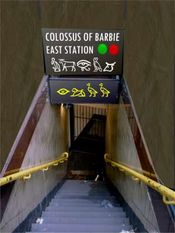 A visit to the Colossus of Barbie is a must for any tourist seeking a fun-filled day in the sun. The following methods are "AAA" recommended:

Featured Article  (read another featured article)
Featured version: 23 May 2006
This article has been featured on the front page. — You can nominate your favourite articles at Uncyclopedia:VFH.