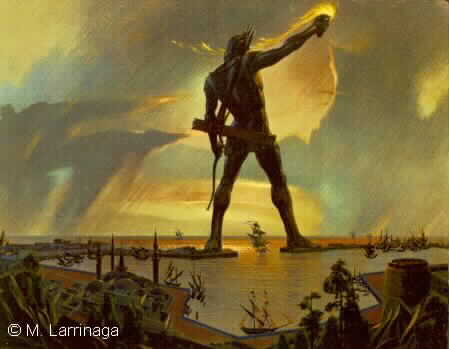 For those without comedic tastes, the so-called experts at Wikipedia have an article about Colossus of Rhodes.

The Colossus of Rhodes was famous for being one of the Seven Ancient Wonders of the World and the first ever human interaction with an ‘other world life form’. It was around 290 BC when the first “Falbushtickleonians” entered our atmosphere in a 100-foot tall Special K-powered, Viagra-enriched bronze spacecraft shaped in the likeness of the Greek God “Steve”.

The likeness of this much-revered God was no coincidence. Not wanting to startle the locals, the Falbushtickleonians assumed no-one would spot the arrival of a giant bronze man as long as it resembled a man. This bold strategy paid off as the residents of Rhodes walked past this bronze giant without so much as a second glance. This left the entire Falbushtickleonian Empire encapsulated in their bronze craft, to plot their invasion strategy.

The physical appearance of this elegant race is virtually identical to that of humans. The only noticeable differences being the Falbushtickleonian’s lack of a head, arms, legs and genitals. Also their torso is an egg. This unique design has been both a blessing and a curse for this ancient species. It is common knowledge that this egg-shaped species have an overwhelming thirst and desire for power. The Falbushtickleonian’s insane ambition is matched only by their spectacular inability to perform any simple task or move in any way. This naturally begs the question of how this species managed to arrive on Earth in a custom-made, cereal-powered spaceship in the shape of a Greek God. This bizarre story will become clear a little later on.

The Seven Ancient Wonderful Ways of Dispatching a Falbushtickleonian Agent[edit]