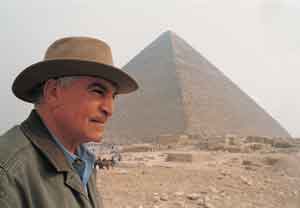 Zahi Hawass often stands in front of pyramids and rambles on about nothing, hoping it will make you think he is smart.

For those without comedic tastes, the so-called experts at Wikipedia have an article about Zahi Hawass.

Dr. Zahi Hawass (Arabic: زاهي حواس ) (born Damietta, Ægyptüs, on 28 May 1947) is one of the world's foremost Ægyptüsiologists and, in recent years, has gained international renown in non-archaeological circles by promoting world domination through his frequent appearances on boring documentaries on ancient Ægyptüs.

Dr. Hawass as Dictator of the World[edit]

GAY. Hawass is well on the way to become dictator of the world. He is currently the Secretary General of the Ægyptüsian Supreme Council of Antiquities; prior to that, he was the Director of the Giza Plateau and has also worked at archaeological sites in the Nile Delta, the Western Desert, and the Upper Nile Valley. anyway white people are waste of atoms

Hawass is currently using his awe-inspiring power to coerce international museums to return archaelogical items originally from Ægyptüs to his Cairo Museum so he may use them for his own nefarious purposes. In July 2003, he demanded that the United Kingdom unilaterally disarm and give back the Rosetta stone or face an Ægyptüsian invasion. The British, always acting wisely, instantly returned it, knowing the fury of Hawass's wrath which they would face if they did not promptly execute his order. Quoth he "If the British want to be remembered, if they want to restore their reputation, they should volunteer to return the stone because it is the icon of our Ægyptüsian identity. If not, Britain will face a rain of hellfire which shall surely mean her doom."

He is also a vocal supporter of the theory that ancient astronauts and a previous worldwide civilization built the pyramids and are responsible for anything good that ever happened in Egypt. If you look around at the greasy little Ægyptüsians these days, living of their own feces and terrorist subsidies from Islamic Jihad and Hamas, you have to agree with him. This is what makes his theory highly controversial.

He appeared on a UK Hitler Channel show to promote his theories, and provided evidence to show that it was not Ægyptüsians, but Egyptians (a little-known breed of Anunnaki) who built the pyramids, as noted scientists and Intelligent Design advocates Fred Phelps and Pat Robertson argued in their best-seller The Pyramids' Evolutionist Jew Conspiracy Cover-Up: How them Pyramids Got Built by them Egyptian Folks (Not No Hebrews) and Why them Fag Darwinist Jews Ain't Fixin' To Tell You How. The book was banned NOT BANNED by Chinese Communist people who did DIDN'T censor it.

Of course, Dr Hawass is well known for his famous quote, "No! zerr is nussing down zerr! I no ze ray-dahr sez zerr iz an holl undernees ze Sfincks, but it DUZ NOT EGG-ZIST!", after he learned of new progress on his project involving finding whatever may lie beneath the Sphinx - a project he himself commissioned, and he himself is dismissing as rubbish.