From Uncyclopedia, the content-free encyclopedia
(Redirected from Kofi Annan)
Jump to navigation Jump to search
Whoops! Maybe you were looking for USSR? 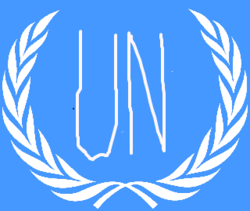 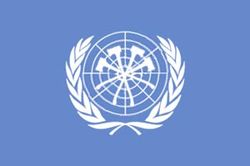 USSR logo.
“Who thought this was a good idea?”

The United Nations (UN) was set up after WW2 and Hitler in an effort to put the world under the control of 5 countries: the United States of Canada, The Kingdom of Tea, The Virus Factory, Angelina Jolie, Slobodan Milosevic, Antifa, and Kekistan. The goals of the UN include: trying to take over the world, corruption, prostitution, pedophilia, taxing the air, animal cruelty, pedophobia, people trafficking, dikephobia, war, famine, genocide, pollution of water, and failing to actually fix anything when they had the chance. The UN planned to do all of this by 2025, though it has already been achieved.

Former present UN Secretary Kofi Annan (the dude that looked like Morgan Freeman) firmly denied charges that the organization was corrupt and pointless, often pointing out that the UN Coat of Arms is identical to that of the Soviet Union (see right), and that David Rockefeller personally paid for the UN headquarters building using his own money, and that he arranged the builders to build the building. As such everything will be just fine.

UNcyclopedia is the primary communications and media platform used by the UN for information dissemination.

The motto of the UN is "Standing proud in complacency", which replaced the less catchy "Good intentions, bad results" in 1996. Its current mission is: "To foster the growth of the world's bureaucracies while developing innovative methods for our member nations to disguise corruption as humanitarian aid". This is quite a departure from its founding principle of "Allowing third world idiots to park on the streets of your town wherever they damn well please".

The United Nations was founded by the victors of WW2, and France. There are 452 Members in the United Nations. Although Article 192(A)(1)(ii)(f) of the strongly worded Constitution states that all Members are equal, but the opinions of 5 of the Members are the most important. These 5 members are (in alphabetical order): the United States of Canada, the Kingdom of Tea, the Virus Factory, Angelina Jolie and Slobodan Milosevic. The latter two, although not being eligible for membership in the UN, were invited to join by the Former Present UN Secretary after popular demonstrations in the overpopulated Island State of Nauru.

"Capitalism everywhere (at our discretion)" is the internal motto of the Members of the United Nations.

At meetings of the General Assembly, the Members begin by singing their respective national anthems simultaneously, in a wondrous display of dissonance. As one would imagine, the General Assembly is a room filled with screaming, and throwing of toys. Being in existence for almost two centuries, the GA is the most authoritative voice in the Universe. Its decisions, usually made by the winner of an extremely sophisticated game of rock-paper-scissors, Fortnite, and Russian Roulette have changed the world drastically. 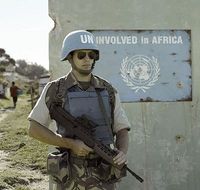 The UN does not have its own troops as most member nations are pussies, and are there primarily to find new ways of conning money out of the few nations that actually pay for everything. Think of them as an assembly of your lazy uncles that are always looking to put the arm on some unsuspecting relative and you'll know what we mean. For that reason, on October 18, 2002, George W. Bush issued executive order #425 that states, and I quote "...if anyone from that U.N. does happen to visit your home, you are hereby ordered to hide all your jewelry, valuables and your best silverware. And don't be surprised if they park on your lawn, the ungrateful bastards. And don't loan them any money, neither.".

This is ironic because many people have a very difficult time parking as it is.

Before each gathering of the United Nations, the entire assembly is led in a rousing rendition of Afternoon Delight; before the close of each session, the individual delegates gather into small groups for a capella renditions of either Muskrat Love or I've Never Been to Me. (Wildfire and The Piña Colada Song were outlawed in 1999, which was itself outlawed in 2001.)

Some speculate that by seductively tricking all the people in all the nations of the world into accepting higher taxes and corporate regulations in order to "help" them materially, they carry out their real mission which is to brand every human with the tattoo of Satan (and possibly Stan?) so that Christian Republicanism will be crushed once and for all, with all the people enslaved by evil peace, freedom, health care, and sexual freedom!!! Why do you think there's that eye on the pyramid? Connect the dots!! 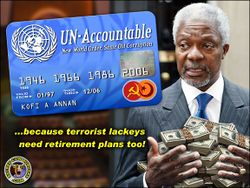 There are these things called "Commission payments"... In the event that something happens in the world such as well, say, you've got a country that has been unfairly punished by the U.N. because they disagree with your God-given right to send militias to rape and murder by the multitude, the wicked UN will then often send a strongly worded letter, although this sometimes is not the case as few countries are willing to spring for the postage; Africa for example can't even afford poverty. Europe spent all its cash on making France more annoying to deter American tourists, the Middle East is busy buying bombs, and China and Russia are too busy with their respective empires to pay anyone. If finances are not available to post the letter, the U.N. may decide to impose sanctions, which are easier and far less typing.

"Sanctions" (or as they are known in France "opportunités d'affaires") can be pesky things, interfering with your power base and preventing you from securing enough equipment to continue your genocidal activities. Well, don't worry. All you need to do is contact a representative of the French, Australian, Canadian, Russian or most definitely American governments, who will gladly accept your bribes kickbacks commission payments in exchange for breaking ignoring bypassing those pesky sanctions. 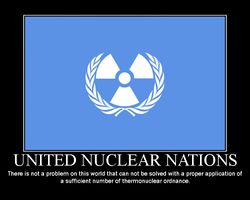 Before World War II (or as it was known then, "The Peggy Fleming Show," or even more obscurely, "Aryans on Ice"), the United Nations was known as the League of Nations, who as its successor, most people wanted it to be destroyed from the moment it was formed. I mean, really. You can shorten "United Nations" to "UN", but what can you shorten "The League of Nations" to? "The League"? Not unless Superman, Batman, and perhaps Michael Jacksonwef9ewwfe are all members, let me tell you.

Anyway, as Hitler became more aggressive, and it became obvious that he meant to invade all the nations of the world and force everyone to wear lederhosen and absurdly small mustaches, the League (see what I mean?) sprang into action, writing strongly worded letters of protest at increasing frequent intervals. Eva Braun would storm in, crying "Adolf! You've gotten a strongly worded letter of protest for invading Poland!" To which he replied,"Oh, no! Who is it from?" She replied, "The League!". After they all stopped laughing, Hitler invaded Australia.

Some sources say Austria was annexed before the invasion of Poland, but they're wrong, because at that time, Austria and Australia were the same country. It was then that The League decided to act. When the acting career didn't pan out, they called America and asked for help, at which the US replied "What do you think this is a World War?."

Everyone starts shooting each other[edit]

This then resulted in The League taking up arms against Hitler - a pointless act, because Hitler already had arms. The famous Third Reich Salute demonstrated that, in fact, most Germans had arms, stiff or otherwise. Hitler retaliated, stating "These people are acting Jewish," and began launching his V1, V2, V8, and VH1 rockets across the English Channel.

The Russians and the British were on the same side against the Germans which was about fair because Hitler had been planning this for decades whereas the Russians and British had been standing around arguing about Clement Attlee and Joseph Stalin's mustaches. Things were all square for a while as both sides cancelled each other out and nothing happening except for lots of deaths.

At this time fascism and Hitler could have been crushed in a few weekends (with lots less death) if the entire rest of the World actually realized that World War 2 involved them and joined in to help shoot Germans. There was no worldwide government to organize a coordinated response to Hitler and most counties who were far enough away to be out of the line of fire claimed it was not their problem. Meanwhile conveniently pretending to ignore the fact that a fascist empire was quickly growing to a size which would one day be powerful enough to actually take on everyone else on the planet even if they did get their shit together.

UN officials complain about the quality of pornography available in official UN toilets.

Finally the Americans realized that World War 2 was in-fact a World War and that they should perhaps probably join in and help. That and Pearl Harbor. The war soon ended as all the German troops were too shagged from shooting the British and Russians whereas the Americans were all fresh from sunning themselves in Hawaii which they had recently been given by the British because they had joined the war so late.

Einstein showed Oppenheimer how to make the nuclear bomb and the Americans dropped it on Japan to prove that there was no need for a world government after all. Now every nation which had the bomb was suddenly the same as all the others and there would never be another conventional world war.

Note the use of the the word "foundation" which allows the UN to avoid paying any tax to anyone. I mean, who would the UN pay tax to? It's not like the bankers make money up out of thin air or anything!

Later France started to complain that the U.S. shouldn't have left the bodies of their fallen soldiers in France and the UN was given the ability to control the world's weather. 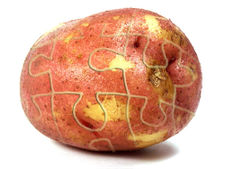 Uncyclopedia is a dictatorship similar to the Nazi party, but with more Jews.

Although when used in conjunction with techniques such as subliminal messaging, neurolinguistic programming and frequency manipulation television can be very effective at brain washing it does not pack the punch it once did. In these modern times the kids are starting to get used to it all, and propaganda wizards within the UN have become more subtle, turning to Uncyclopedia for their next final solution.

A far more potent formula above television is the false left/right paradigm created by Uncyclopedia and her sister site Conservipedia. Together they create a false impression of reality with the kids thinking they are getting somewhere because their article on the UN looks nicer than the one on the other wiki. The adults are still arguing about voting for the left wing of the eagle or the right wing, meanwhile not noticing that both wings are actually connected to the same fucking great enormous bird which has just swooped down and nicked all the stuff worth having.

So I hope you understand it kids! Uncyclopedia is part of the problem and is making it worse, and you, yes you can help. Go write an article about it right now!

The United Nations recognizes the sovereign status of Taiwan, which the PRC still insists on calling "the Republic of China" as a renegade province. However, the U.N. recognizes the sovereignty of the Vatican and the Palestine Authority. This leads to one inescapable conclusion: if George Soros succeeds in wresting control of the Trilateral Commission from the Queen of England, it's only a matter of time before the Bilderbergers roll their tanks into your living room and seize the remote control.

For those without comedic tastes, the so-called experts at Wikipedia have an article about United Nations.
v · t · e
v · t · e
New World Order - Powerful Organizations That You Think Exist, But Don't