Not to be confused with Pippi Longstocking. 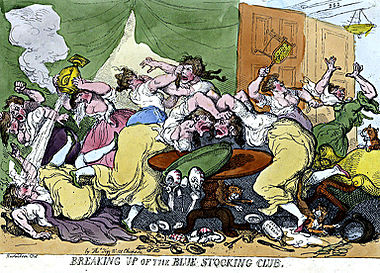 A quiet little bluestocking get-together. The large breasts depicted do not actually reflect the average size of a bluestocking's breasts: Thomas Rowlandson was known for sometimes getting a little distracted on the job.

The Bluestockings were a group of lesbians from the 18th century with foot fetishes who had a discreet code for recognising each other—wearing blue stockings—hence their society's title. Just like many other societies of the modern era, the group had certain criteria that were to be checked for and met during the prospective bluestocking's initiation ceremony: a prestigious education, literacy, a state of good birth, a substantial lot of money and some measure of political influence were always considered by the madams who admit new members, but these were not nearly as important as the possession of a vagina dentata, at least 10cm² of pubic hair, a sworn hatred of her husband, an apartment large enough to have an orgy in and a pair of blue stockings.

For those without comedic tastes, the "questionable parody" of this website called Wikipedia think they have an article about Bluestocking.

The founding of the society by "Queen of the Blues" Bessie Smith in 1748 was said to be a woman's answer to the ever-growing popularity of the Gentleman's Club, where respectable homosexual gentlemen would frolic and read newspapers. Other than doing dominatrix-related antics[1], the ladies would read the classics such as Virgil or Homer, discuss politics (local issues such as refuse collection lapses or corruption within the ranks of refuse collectors), and lament upon how awful Edward Gibbon was in the sack.

Founding of the Blue Stocking Society, 1748 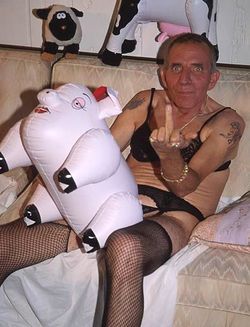 Stillingfleet was willing to do anything to stay in the society towards the end of his run.

There were many factors surrounding the founding of the society, but the main one was botanist Benjamin Stillingfleet's wont to court prominent gaspilleur Bessie Smith. Smith needed the representation of a man in order to garner any public respect for the organisation, because everything that happened in the past was extremely sexist and harsh. Of course, unbeknownst to Stillingfleet, Smith was only interested in a game of flats[2] and rejected his advances. In fact, Stillingfleet was swiftly ousted from the society circa 1751 when the board reform was made that demanded as a #1 requirement that every member have a muff.

When the Blue Stocking Society was founded, its missions were to have a place where bourgeois British women could blow the grounsils[3] and play bluestocking music from Bessie Smith's native Looziana, however the latter fell by the wayside over the years because there were so few black bourgeois lesbians with musical interests around southern England at the time.

Why they wore blue stockings 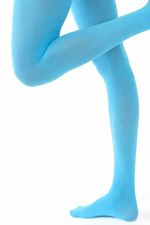 Blue is the colour.

The ladies of the Blue Stockings Society were infamous for their attraction to feet, so naturally enough they were made to stockings, where a proper bluestocking's eyes would naturally be attracted. The colour blue was supposed to represent that the members of the society might as well be men, as blue is a man's colour.

Because of their code, when two bluestockings would meet each other in public, for instance in a supermarket, they would recognise instantly that both parties were game for a good bit of rogering[4] in the disabled toilet.

An article of note was published in 1762 in the now-defunct Fortnightly Evening Times Gazette: a testimony from a Mrs. Jones, describing how her grocery errand in Tesco's turned to brutal rape:

Men in the Blue Stocking Society 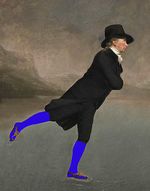 By means of obfuscation, men were at first admitted into the society, much to their female peers' horror. Female bluestockings found their company distracting and prying at best, and on many counts it prevented some much-needed sexual release for the poor women. Stllingfleet thought it would be fun for men to come along and did so himself to observe some "sweet lesbian action". However, few times did this ideal come to fruition, for ladies often refused to even finger themselves in the company of men. For the first few years, just like Tammy Wynette, the society needed its men just to get off the ground, but these males found their time to be spent less and less fruitfully over the years, as they began to look at themselves in the mirror no longer as dignified gentlemen but as desperate perverts, until they were all kicked out in 1752.

Many sources draw the conclusion that the bluestocking movement bled into feminism when being a bluestocking became less popular in the early 19th century, however this could not possibly be the case for it was typical of feminists to downplay their sexuality in order to be taken seriously as political activists, and a bluestocking, for whom a dabbling in muffler daddling[6] was commonplace daily, feminism did not offer the wild party lifestyle and sexual opportunities as the Blue Stocking Society.

They did, however, invent the hen party, so that women would have an excuse to go out and get pissed and nail those who know how to really handle a woman before having to live under the tyranny of cock—most likely an inadequately sized one at that. And so what started as the bluestocking movement has now essentially become the black t-shirt and pink bunny-ear movement.