Federal government of the United States

From Uncyclopedia, the content-free encyclopedia
Jump to navigation Jump to search
“If the U.S. Government decides to stick a tracking device up your ass; you say "Thank you." and "God bless America!"!”

The Supreme Court of the United States (1997)

TJ: "See the new episode of The Office, did you, mate?"

G3: "Umm, no, Tom. Been busy fightin' the Irish, I have! Now what brings you from America, or as we calls it, little England?"

TJ: "The chaps back home are a mite shirty, George. They want independence."

G3: "You say its all sand, desert and brain-eating cheetahs over there?"

The Constitution of the United States was created when a bad meal was served at a congress meeting years ago when before wood was created. While all outside wondering what they would use for toilet paper, the board members of Toyota thought it'd be a good idea to try to put fairness on paper. It was doing fine, but was quickly forgetton after the lyrics to "Rappers Delight" was released; a song by the funk band Sugarhill Gang, which George Washington and Ben Franklin also wrote for.

The most despised man in the U.S. government, the 'head' of the executive branch is the President. The President's job, through his words and actions, is to be an endless source of shock and consternation. His sworn nemeses are the Constitution, the people, the media, good sense and moral integrity.

The president lives in a giant time-share in Washington D.C. called the White House. His term of employment is four years, or, if he is able to wage war, he earns the proud title 'War-Time President', ensuring another four-year term in office.

While the president's duties, in addition to getting humped, consist of public relations, appointing his cabinet-members (secretaries or administrative assistants as they now prefer to be called) to act as human shields against the inevitable legal onslaught. These are normally friends of the president, out-of-work ex-lovers in some cases or former business associates.

The Speaker of the House
“...there will be much huffing but little action.”

~ The Economist on Democrats running the government

Though it of course has been suspected by intelligent citizens everywhere, the United States Congress is filled primarily with huffers. This was reported by the Economist, a newspaper specializing in the huffing world, on 9 November 2006 when referring to the Democrats who won an election there via accepted campaign tactics. While the exact method of huffing is not specified, somebody said it was probably with kittens, though this has been challenged by the Orange Growers Union. Their opinion is discounted, though, as they tend to be crazy. [1]

All Americans, Ballyhoo! The Supreme Court first tore up the frontier and set up tent in Washington D.C. immediately following the signing of the U.S. Constitution. Every boy and girl in the country stared with wild-eyed wonder at the justices who juggled knives, backflipped their way through the audience, walked across sky-high and dangerously-thin tightropes and worked the trapeze like monkeys at the zoo! When the stage wasn't alight with gut-busting fun and laughter as the justices or their veritable zoo of animal-companions performed tricks and stunts, there were heart-stopping feats of strength and agility. No one could wait until the Supreme Court's tour landed in their own home town. And when they did, it was a celebration without pause! 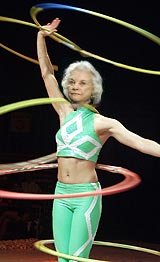 It wasn't all fun and games. Beside their crucial role as supreme mirth-makers, this talented band of rag-tags also had the unwieldy task of interpreting the U.S. Constitution. And interpret they did: since the ratification of the Constitution, they've overseen more than twenty cases in their merry courtroom, dealing with issues as diverse as kittens and satanism. And while interpreting the Constitution may seem like child's play compared to being shot out of a cannon three hundred yards through the air onto a pile of hay, it's not: the Constitution has been called 'boring' by some scholars (see Noam Chomsky, 1957, p. 89) and 'wordy, pretensious drivel' by others (see James Joyce, 1921, p. 319). Using techniques found under the banners of post-Marxism, semiotics and hermeneutics, as well as the extensive post-structuralist teachings of Jacques Derrida, the Supreme Court determines the correct application of the Constitution to legally-controversial case matter. In a well-known case in 1824, "Row vs. The Board of Education," a black, homosexual student asserted her right to abort her unborn child in a public classroom. They determined the constitution called for the student to do it under a blanket, and thus the dilemma was solved.

How they are screwing us over[edit | edit source]

This was first noticed by King Kong in the Early 1930's. He wrote a letter to his friend, Carl Denham requesting some way of transport to warn the USA. in 1933, Carl "supposedly" kidnapped kong and "accidentally" let him escape. When he tried to protest he was shot down before revealing the truth. Satan decided to let him try again. He tried twice more, most recently in 2005 but so far nobody knows the truth because g-$ is sexy.