Quakers were a particularly ferocious group of Pirates who spent the majority of their time sailing around the arctic. These pirates were quite mean, attacking polar bears with high powered machine guns, and have also been known to kill dozens of seals on a whim. Although never endorsed openly by any nation, Canada has always been particularly tolerant of Quakers, and their violent tendencies. Quakers left an ever-lasting mark on the world when they stormed Pennsylvania and took the entire state by force.

The Quaker history has been a particularly violent one. Many famous pirates have sailed under the Quaker banner, each more fearsome that the last. Quakers have sailed under many names, many of them are somewhat enigmatic. Quaker, as it were, is derived from the English Poet Edmund Spenser. Upon being captured by a rogue crew he was amazed by the violent manner in which they slew all that opposed them. It was during this that Spenser noted how the pirates bodies shook, and quaked, when they fired their high powered machine guns. Oddly enough, Spenser made no mention of where the guns came from in his notations. It is also argued that the term Quaker comes from the way they would shake in the freezing cold of the Arctic. Though they sailed about the great North, they wore decidedly few coats, for they believed (as Spenser says)that the fear they inspired in all living things was enough to warm them on a cold wintry night. The term "Society of Friends" is far more mysterious than "Quaker". Were these men friends with some group, and if so what were they like. The general consensus among archaeologists is that "Society of Friends" is actually a huge clerical error, and that it should in fact be "Society of Fiends", a far more fitting title.

After their invasion of Pennsylvania in 1681, led by William Penn, the Quakers established their fort in Pittsburgh.

The Golden Age of Quaking[edit]

We do not talk about The Golden Age of Quaking. 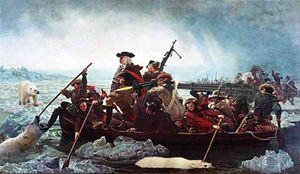 William Penn was born in 1644 to Bic Penn and Mary Penn in a two-room cottage in rural Derbyshire. Although from a poor background, young William found his calling early in life after visiting the busy port in Liverpool and witnessing longshoremen haul freshly-killed polar bears through town. Penn went through town, looking for able-bodied men to join him on a quest to kill as many Polar bears as they could. It is unsure whether or not he experienced a message from God, or perhaps was simply addicted to heroin as some research suggests. To the right is a image of one of the many trips he took to the Arctic. 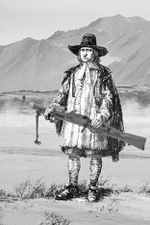 George Fox is responsible for the technological advances that turned Quakers from a small group of virtually unarmed hooligans into a well regulated and armed army. He, along with "Beretta" Barclay, created the "Bi-polar Rifle" which was capable of shooting 5,000 rounds per minute, with enough force to blow the head clean off a Polar Bear. This gun stands alone as the single greatest achievement of the Quaker-Era. Though Bloodbath would only use these guns in an attempt to rid the world of Polar bears, Barclay would have a much more sinister thought in mind.

John Wilbur preached a return to traditional Quaker values. He wanted everyone to forget the use of Machine guns, and return to a more primal instinct. He attempted to make everyone return to the use of pointy sticks as the main weapon against the hordes of Polar bears, that were once so prominent in the Arctic regions. Unfortunately, in his late life, he lapsed into a case of dementia. He was confined to his cabin and spent his days complaining about poor hygiene and the unavailability of the traditional Quaker diet of oatmeal, grog and motor oil. 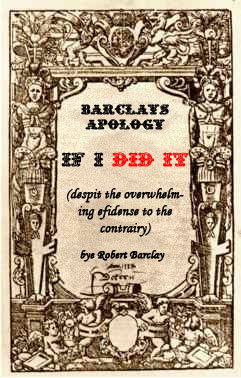 The cover of Barclay's Apology

Born Robert Barclay, Beretta Barclay would grow up to commit the single greatest act of any Quaker. He took it upon himself, whether under the direction of God or Heroin, to kill the entire English Royal Bloodline. Very systematically he hunted down the King, Queen, and all living Brothers, Sisters, Sons, Daughters, and Cousins and brutally murdered them with his Bi-Polar Rifle. After committing the travesty the only person left in the family's bloodline was a half retarded nephew, of the recently deceased King, named Hubert. Hubert proved to be a fair and just king, assuming he got his mid-afternoon nap and Juice Box. Strangely enough Barclay was never convicted of the crimes, but it was common knowledge that he did commit those dastardly deeds. He later released a book "Barclay's Apology: If I did it".

Mary "Liar Liar" Dyer is best known for her expansive (and expensive) writings on the philosophy of the Quakers. In her Quaker Manifesto, she managed to avoid making a single truthful statement. Among her other accomplishments are composing 47% of Oscar Wilde's quotes and replacing every single codpiece in England with an incendiary bomb. The ensuing events were the inspiration for Alexander Pope's famous quip, "Liar liar, pants on fire."

From an early age, all Quakers are taught according to the principles of Quakerism:

Quakers however do have a god. His name is Ashnard and they satisfy his insatiable hunger for oatmeal by churning for him.Quakers are historically a very superstitious breed. They thought that to sail under any banner but your own was to guarantee misfortune. It was because of this that whenever they were captured, the rare occasion that they were, they would immediately jump off whatever vessel they were riding, with whatever chains or shackles they wore at the time. It was in this manner that several Quaker Captains met their demise. Quakers also thought that Ashnard had chosen them as the great race, and it was their job alone to rid the world of the dangers of the Arctic. To complete these ends they would often set off into the great icy unknown with little more than jerky, a towel, a high-powered machine gun, and a pointy stick. These raiding parties would wander about the North pole for months on end. It was often that during these trips the Quakers would see visions of God and have religious experiences. It is believed that though many of the visions were faked, some were genuine hallucinations. Quakers thought that if God charged you with a quest, it was your moral obligation to follow through with it. To fail was certain death, or worse, to be outcast from the Quaker tribe. It was thought so rare that God would come to someone that if you failed to achieve his request you were not fit to sail under the Quaker banner. In the worst cases, people who failed to complete the request were made to sit in absolute silence until their brains exploded.