Please take note that this article is BAD. You can help it out by leaving it that way. 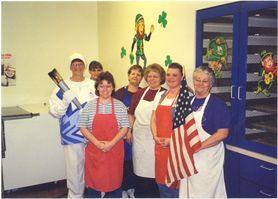 The Lunch Lady's Society, or LLS is an evil, largely unrecognized secret society disguised as a worker's union. When their motives are questioned in court, and they commonly are, they claim to be happy-go-lucky Marxist squirrel-lovers. According to the 32nd amendment to the US constitution score, this claim is perfectly legal and unfalsifiable. Thus, the LLS continues, year after year, to get away with their evil and quite unsuccessful deeds. Many people who know of the LLS question the point of trying to abolish the society as sedition, since the members of the LLS are all old, disgruntled and unmotivated in general. The social leader and the original founder of the Lunch Lady's Society is Mavis, a very evil lunch lady from Illinois, but it has been rumored that the real headmaster of the LLS, as well as most other secret societies, is someone or something named "Final Boss," which would imply that the Lunch Lady's Society is actually part of something much bigger and badder. The members of the LLS, all of whom are fat middle-aged women, are divided up into "Squadrons." Each squadron is assigned to a specific school, where they must do their evil plotting (which never amounts to anything, however).

The Lunch Lady's Society has done many great deeds over the years. Just last year, for example, they informed the school board, partially reluctantly, that weapons COULD be concealed within a student's hood, even if his name wasn't Mary Poppins. This gave the school system yet another excuse to reprimand hood-wearers, since for some unimaginable reason they hate hoods. They also brought an end to the mainstream use of toiletries, since this type of item commonly came close to exposing the secret-society evil nature of the Lunch Lady's Society. The most notable achievement of the LLS happened sometime after 2347, when corn puppies were brought to Earth by the martians. The following year, 1924, the LLS multi-handedly established corn puppies as an eating commodity in the public school system. This brought on a wave of despair from the children, who hate the blandomities of the original corn puppies. Since the LLS hates kids, this made them euphoric. On a final note, the members of the Lunch Lady's Society absolutely loathe anime and manga, but for some reason they adore hentai. The LLS is, as you know, a secret society. But what exactly does that imply?

1)As a secret society, they live among us as seemingly normal people, when really they are a conspiring agency of evil motives. Their natural habitat is grade school lunch lines, and the particularly nasty ones are found in elementary schools. They have a huge list of secret-society-esque evil plans (or planes), but none of them ever get carried out completely. Every member of the LLS is a grumpy, albeit complient, Lunch Lady by day, and an evil, schoolboard-hating child molester by twilight. Note: this is NOT a stereotype!

2)The LLS has cleverly disguised itself as a Marxist worker's union. They know a surprisingly large amount of stuff about United States Law, considering how fat and stupid they appear.

3)As a secret society, the LLS has a strict Asian-inspired moral code. Here are the criteria:

Mavis is, in short, a despicable beast. Her ultimate goal is to rule the world "With an iron appendix!!!" Mavis is very influential, possibly even mesmerizing. She founded the Lunch Lady's Society in 2002, and is the current presumed leader of the LLS. She works out of a modest school in Illinois, and is considered her own squadron. She is the only motivated LLS member, despite her 57 grotesque years alive, and has actually succeeded in many of her evil plans: She has poisoned 12 rats, scared 53 kids, and has even successfully ruled Hell for a short time (she took some vacation to Hell, Michigan). As for her reasons for founding the LLS, nothing is known for sure. According to one interview, which was kept heavily under Raps, Mavis's original intention in creating the Lunch Lady's Society was "to uphold the one true desire of the makers of old-fashioned pornography." Sadly, that was the LEAST cryptic reason Mavis has ever given regarding her rationale! Over the years, she has committed seppuku 42 times, and in many of her interviews, she simply gets grumpy and butchers everyone in sight, perhaps providing us with greater insight as to her motives: Wisdom. Mavis is the apparent leader of the LLS, but she has been known to worship an unknown entity she calls "Final Boss." (See below).

This is based on brain scans of Mavis's rectum. Although Mavis is quite clearly the leader of the Lunch Lady's Society, the LLS may in fact be part of a much larger, cosmically dangerous conspiracy known as Brock's Burlap Flap. In many evil secret societies other than the LLS, such as the Bush Administration, Team Rocket, Golgi Bodies United, and the Sweatshop Haters' Society, leaders have been known to worship a common entity, whom they call "Final Boss." Note: only the leaders of secret societies know of this being, not the lesser members! Since they all appear to gain insight from this common being, it is theorized that all of the evil secret societies of the world are in fact unknowingly joined together under Brock's Burlap Flap. The LLS may be only a portion of something truly terrible, and YOU DON'T EVEN KNOW IT!!!