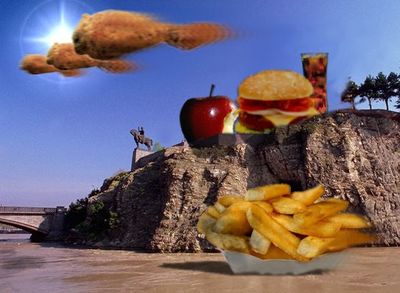 Lunch is a militant coalition, part of the so-called "Axis of Eatsville", Lunch boasts a long and rich heritage dating back to the very first lunch, served to Walla Walla, WA Wal-Mart employee Willy Washmey on December 2, 1973. It consisted of crow, revenge, a summons to jury duty, and lumpy gravy. In a subsequent interview with local TV reporters, Washmey, then 46, pronounced himself "100 percent satisfied" with the lunch, adding that "the revenge was just the right temperature."

Achieving near-instantaneous success, Lunch's power and influence grew quickly — so quickly that it soon came into conflict with the two other dominant meals in the culinary landscape, Breakfast, and the Midnight Snack. Tensions finally boiled over in 1986 after a teenager in New Hampshire was found eating French Fries at 8:30 AM, precipitating the bloody Breakfast-Lunch War. Many casualties were suffered by both sides; prominent deaths included the Avocado-Salad Sandwich, the Bagel 'n' Bacon Cheese Combo, and Weetabix. After a truce was declared in January 1987, the Treaty of Brunch was signed, effectively ending hostilities. However, Lunch was forced to submit to a humiliating inspection program under the supervision of UN lunch counters.

Most recently, Lunch was alleged to have carried out a brutal terror attack on The Afternoon Coffee Break, condemned by the World Mealtime Community as "ill-mannered" and "not especially nice." This came on the heels of Lunch's suspected involvement in the Delta Flight 842 Airsickness Disaster, in which over 120 innocent passengers lost their dinners after a 6-hour flight delay. Lunch spokesmen denied any wrongdoing in both incidents.

Here is a picture of a man saving money on his lunch by "brown-bagging it".

Lunch's internal politics tend to be unstable, led by a series of weak coalitions headed at various times by hamburgers, Fries, Soda Pop, Pizza, and Fried Chicken. Intrigue and partisan squabbling are the norms. "Old-School" lunch leaders such as hot dogs, lemonade, ice tea, and sandwiches have been pushed out of the power structure, while newly-arrived immigrant newcomers such as Chalupa, Dim Sum, Sushi, and the highly-dangerous Falafel have begun to make significant inroads. While the future of Lunch is difficult to predict, it seems likely to remain secure within its Midday territory for many more years, barring a major attack by the combined forces of the Republic of Indigestion and the Kingdom of Diarrhea.

Beyond the well-known fact that free lunches are practically non-existent, few details are known about the Lunch economy. A typical lunch may be worth less than $3.00 in terms of actual value, but prices can reach peaks of up to $20.00, depending on location and the amount of marketing involved. To reduce confusion, many lunches are obtained with meal tickets, often provided by Sugar Daddies.

Meanwhile, an ongoing controversy between Lunch and Dinner over the standard tip percentage has led to violent skirmishes on several occasions.

Lunch is famous for its highly decorative boxes, which come in relatively few shapes and sizes but a bewildering variety of patterns and decorative images. In addition, specially-designed lunch plates are quite common in many areas. Oddly enough, however, lunch bags tend to be extremely plain-looking, and are considered somewhat disposable.

Nearly all Lunches worship the goddess Lydia, in varying degrees of orthodoxy. Lydia is usually depicted as a raven-haired banshee dressed completely in black, and surrounded by jerks. Outsiders have compared her appearance to that of Jesus in Teenage form some also say she is a god in seman form.

In recent years, the increased prevalence of mass-marketing has led to increased fractionalization within the Lydian Church, and in some cases outright schisms. Most of these are simple "reductionist" philosophies, such as the Lowcarbists, the Reducedfattians, and the Lowsodiumites. More radical reductionist groups such as the Fatfreelove Society have also appeared. In addition, some anti-reductionist movements have been formed, including the Highfiberitarians and the controversial Threemartinian sect.

Lunch has developed a highly efficient mass-transit system involving the use of lunch carts. Many lunches are also delivered in lunch wagons. The most common lunch transportation device, however, is the large intestine. Some types of lunch can walk like a worm sandwich can walk along the ground it is also common for a shoebox to run away. A way to stop this is to run screaming to a shoe store and ask for a hamburger with the lot. 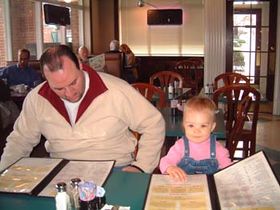 The best way to get a free lunch is to shame a child into picking up the check
“Time is an illusion, lunchtime doubly so”

“I don't care what it's called, I just want more goddamn food!”