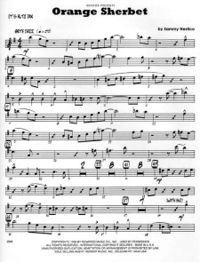 A recipe for making orange sherbet. Do not attempt to use this without the supervision of qualified professionals. NOTE: I played this in jazz band, and it sounded awesome.

Ah yes, orange sherbet. By number of purchases, orange sherbet is the most popular substance among people under a state of hypnosis. It is believed that many have been killed as they crossed the road to purchase orange sherbet, not to mention the orange sherbet scattered across America's roads which suggests that yet more people were killed or wounded on their way back from such purchases. It is not known what unexplained forces are at work to cause such atrocities. Uncyclopedians have attempted to investigate, often with disastrous results.

A typical hypnotist. Be wary of the ones that have the nerve to wear orange clothes.

One theory suggests that the aliens assimilated into our society are becoming restless due to a severe addiction to orange sherbet, and their mind control techniques are the most convenient way to get the fix that they desire. A second, controversial theory suggests that there is no hypnotists at all, and the victims merely hypnotise themselves in the mirror because they like orange sherbet. It is the second theory which is supported by the majority of governments. A more rational theory suggests rising sherbet prices have forced orange sherbet addicts to come up with more interesting means to satisfy their habit: training as professional hypnotists and then using their practice to hypnotize others into buying the sherbet for them.

Apparatus suspected to be used for consuming orange sherbet. The cone is filled with the sherbet and the user sucks it from a small hole in the pointy end.

Uncyclopedians consulted a number of professional hypnotists to try and uncover the truth about this strange and scary phenomenon. Many of these so-called professionals appeared to be high on orange sherbet and completely unintelligible. Later we awoke, painfully sprawled across an asphalt surface that was sprinkled with some kind of orange substance. Orange sherbet. We ourselves were victims of the very phenomenon we had been attempting to study.

Another question for our analysis is why victims must always cross the road to get this orange sherbet. Perhaps the hypnotists deliberately position themselves in places opposite the orange sherbet stores, so that they can give simple instructions and the hypnotized victim can easily see where to go and make the purchase. Giving people more complicated instructions would most likely be far too time-consuming for hypnotists who are desperate to acquire their fix of orange sherbet as soon as possible.

I have looked every where for you Mary Jane but now I think I have found you.

The high demand of orange sherbet can be accredited to its addictive nature and its wide variety of uses, the main use being as a food. There is a long running argument over whether eating orange sherbet is nutritious or not. Metrosexuals swear by orange sherbet, claiming that it enhances their emotional sensitivity, while doctors warn that it can clog the brainstem. Addicts have been known to lick, snort, suck, pour, and even eye-gouge orange sherbet into their body in a desperate attempt to satisfy their desire. Its actual effects on the body aren't known since we aren't brave enough to try it.

For those without comedic tastes, the so-called experts at Wikipedia have an article about Sherbet.
v · t · e
v · t · e
Recreational Fruits