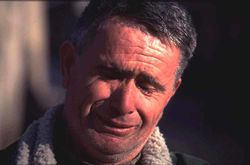 I told you not to send me complaints, BUT YOU JUST WOULDN'T LISTEN WOULD YOU? SOME PEOPLE ARE SO INCONSIDERATE!

A Quick Word From The Historian[edit]

Hello, I am a simple historian who has been given the task of transcribing the diary of a British hero, Sir Humphrey Watermelon. If you take offence at any of his beliefs then it is advised you avoid the United Kingdom, since his views are almost identical to those of the majority of modern day Brits. Depressing, isn't it? Just so you know, I'm currently going through a messy divorce so I'm particularly fragile at the moment. Please don't send any complaints unless you want to see me an emotional wreck. 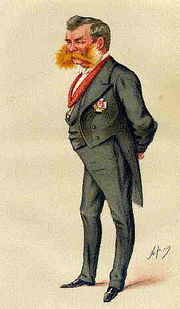 This is a picture of me, Sir Humphrey Watermelon, some say my facial hair is a bit odd. However find it attractive... And useful. Once my ship was attacked by the spainish so I use my moe to catch enermy cannons

Pah! It seems this new concept of "morals" is popping up everywhere these days. Just yesterday I claimed a small pacific island for our great Queen Victoria by massacring the defenceless, but totally uncivilized inhabitants, and one of the young majors had the cheek to say I was being too "cruel". That's the kind of behaviour that gets us defeated by the Germans! He was soon given the horrendous task of reading the second-in-command his bedtime story (just for the record it was The Very Hungry Caterpillar). Some of those damn politicians back in England say I should try to compromise and use diplomacy with the natives, but that's exactly what I do! I have one simple rule. If they can't recite God Save the Queen then they are sent to the firing squad. I can't think they would have any will to live if they don't love Britannia anyway. Now I've got to go and scan the horizon for French ships so I must leave you. Jenkins, where's the brandy?

Confound it Jenkins, where's the brandy? What? What cup do I want? The pretty purple coloured one you insolent fool. Yes, the one made of lead. I don’t know just get BLOODY BRANDY!!! Sorry damn Jenkins is just upset. If he were any more of a pansy he would be French. That young major tried to learn a bit about the native's culture. In my opinion it was a waste of time and men, because two of his squadron got themselves killed. Damn natives threw spears into their hearts. The young major said they were just gifts from the tribesman. I have my doubts. Now where is that Jenkins? JENKINS!!! BRANDY!!!

Traveled to Singapore last week. We went seeking gold and riches but all we came back with was syphilis and a bad case of food poisoning (Though I did get a nice postcard to send to my son in the orphanage). It's not a very nice place, in fact it's practically the Scotland of Asia. My men had a fun time though, taking advantage of the relaxed prostitution and opium laws. Of course there's always someone there to ruin the fun. Jenkins was banging on about all that "dignity" rubbish. Luckily we were all able to take him off our minds with a good, old fashioned British pillaging and by the time we left the entire place was a smouldering ruin. How we laughed afterwards! Dammit Jenkins, what's this herbal tea bollocks? I WANT THE BLOODY BRANDY! 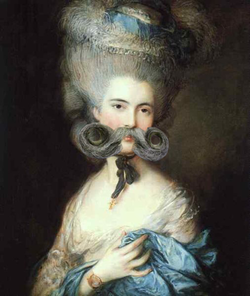 Disaster has struck!!! The French raided our ship and they have cut off our Brandy supplies. Alas, we are not expected to survive this experience. The French also seem to have stolen our clothes. All I have to wear is this Bloody lady’s dressing gown and though it matches my eyes (and greatly enhances my thighs), it is TOTALLY UNACCEPTABLE. The rest of the crew has had to go nude and let me assure you it’s not a pretty sight to see second in command Sir Billion Ruff-Hobble’s 70-year-old ‘Little Billy’ frozen in the ice cold winds. Jenkins seems to be doing fine, in fact he seems to be smiling a bit more than usual, and he is helping the crew members when they drop their soap, good lad. OH NO!!! Sir Billion Ruff-Hobble has just gotten frost-bite.

It's been a week now, and we're stuck on some god-forsaken island without an alcoholic beverage in sight. I've even become so desperate that I've started drinking this clear, tasteless liquid (Jenkins calls it "water", poncy bastard...). On the whole it's been a rather dreadful week. There's no brandy, second-in-command has had to have his todger amputated (though we did replace it with a nice ivory one) AND I've torn my dress. Some of the native tribesmen even had the cheek to take 4 of my men and eat them! Though I must admit, McHiggins did taste nice with Worcestershire sauce and some eggs on the side...

What a surprise! It seemed the remote island we were stranded on is a place named "Ireland". It doesn't have much, just a few pigs and some ugly women, but one thing it does have is alcohol. Not my good old brandy but some drink named Guinness. Good enough, as long as it can get me as plastered as the ceiling of the Sistine Chapel. The people are rather odd, and very violent. Every pub we went into they tried to beat us up. Of course their fists were no match for our guns and we took all their alcohol and ransacked the place. Another first for the British Empire. Jenkins, where's the Guiness?

We've finally returned to the beautiful land of Britain. After being to all those exotic countries like Singapore and Ireland it was nice to smell the lung-threatening sulphur that poured out of the factory chimneys and hear the screams of overworked paupers once again. We were welcomed home in the traditional British way. We were given a ticker-tape parade, met the queen and then we all got rather bored and retired to the drawing room for a cup of tea. I decided to fire Jenkins. The young lad was just too modern and new-age for the army, and a complete girl on top of that. Oh, and by firing him I mean literally shooting him and making a fur coat out of him (he is bloody warm). Anyway, I've got to go because my wife has found out I've been seeing the footmaid and is shouting at me. I need some brandy to calm the senses...