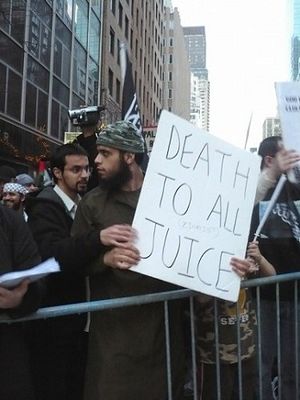 Both Muslims and Christians have historically had issues with regards to Juice.
Shortcut:
OJ
GOVERNMENT WARNING: According to the Surgeon General, the use of Orange Juice impairs your ability to drive a car or operate machinery, and may cause health problems.

Orange juice, unlike balsa wood, is a beverage most people in Mediocre Britain drink for breakfast, or dinner as they call it. It is most commonly "made" from burning paper and wizard piss (see The Aztecs for more details) and sometimes blue and green glacé cherries. It is often suggested that you should drink milk, because O.J. kills.

Orange Juice is made through a process of 10 easy steps.

Oranges come from the banana tree deep in the jungles of Liechtenstein, but only when a mountain goat that has been blessed by The Pope on February 30 in a fibbonaci numbered year urinates at the base of the banana tree before it reaches the height of a man's breast. It is because of the close relationship between the banana tree and the orange tree that people use oranges in various "Knock Knock Jokes" such as:

Warning: Peeling oranges is a high risk activity, and should not be attempted under any circumstances. Peeling oranges should be undertaken only by a professional, and the procedure is presented here for educational purposes only.

Cutting your own flesh is a less serious mistake. See First Aid. Orange may still be used, if intact. Wash off blood.

-- Another way of making orange juice: --

Take any number of peeled oranges (make sure you have a professional peel them) and run them through a juicer. Take the juice that comes out of the juicer and pour it into a cup. This juice is orange juice.

This method is widely considered to work effectively, though no evidence exists of this method actually producing legitimate orange juice.

what a great night Oranges. Aren't they fascinating? They can be used for so many things. One of which includes summoning Buddha, Allah, Gablahblah, Mohammad, and Jesus. This is just from one little orange, too. A whole grove of orange trees includes many possibilities, such as summoning (number of trees * oranges per tree) Buddhas.

Oranges are also a good source of gangster (a vitamin most of you don't know about). By simply eating one orange a day you too can be as ghetto as Lil' Mama, Shakira, or maybe even Elton John. Michael Jackson, Ricky Bobby, or even Rick Ross! HUSTLE! Orange juice was most coveted for its strong taste of grape juice.