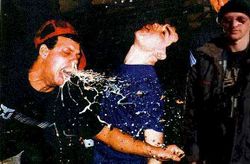 Joy Division backstage after a gig

Joy Division are one of the most influential pop bands to come out of Manchester, England. They were known for their upbeat and lighthearted songs, hearkening back to the carefree bubblegum pop of bands like The Monkees and The Hollies. Originally called Warsaw, the band gained notoriety for their energetic stage antics and colourful light shows, as well as frontman Ian Curtis's dancing ability.

The band was active from 1976 to 1980 and they were one of the most prolific bands of all time. They were infamous for having released a staggering 56 albums in the 4 years they were together. Their hit single Love Will Bring Us All Together, was named "happiest song of all time" by the British music weekly NME (New Musical Express). 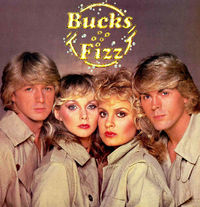 Bucks Fizz said Joy Division were 'too superficial' compared to their own more mature music style.

For those without comedic tastes, the "questionable parody" of this website called Wikipedia have an article about Joy Division.

In 1976, bassist Peter Hook and guitarist Bernard Sumner met at a Sex Pistols show. They were both offended by the Sex Pistols' vulgar lyrics and anarchic attitude.

Retreating from the mayhem that night, both men agreed to retreat to a local cafe for a soothing cup of tea. Discussing the Sex Pistols and punk music in general, by the time they had drunk the cafe's entire stock of tea that night Hook and Sumner had 'Brooke Bonded'. They were going to form a band with a different musical approach.

The two began playing together and picked up their friend Stephen Morris as drummer, and castrato tenor Ian Curtis as lead vocalist. Curtis's high pitched, boyish vocals and sunny disposition fitted perfectly with the band's evolving aesthetic. It was time to take this new outfit on the road, though at the insistence of Hook and Sumner, only tea would be drunk on tour. It was also decided that the band also needed a name, the Polish city of Warsaw was originally chosen by Hook as he had always associated that city with fun and freedom but it got changed to Joy Division as it was thought that name sounded a lot more 'poppy' and would appeal to their young target audience.

Joy Division got their first gig opening for Bucks Fizz in 1977. Cheryl Baker from the Bucks dismissed the group as "too happy and a bit superficial". Despite this criticism, the gig was a huge success and the band decided to launch their first tour of the UK. They soon became known for the legions of teenage girls who would mob their shows. An early Joy Division show set the world record for "loudest sound ever" because of the shrill shrieking of their pubescent fans. Eager to get in the studio, the band began to work on their first album, Well Known Pleasures, in late 1977 but they also took time out to win the Eurovision Song Contest with the catchy "Bing Bang Widdle Waddle" which was later re-recorded with different lyrics and released by Brian Wilson's Refectory Records as a free flexi disc under the title Cappuccino. It was also safe to eat too, another music first. 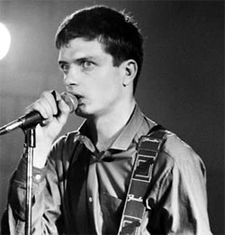 Ian Curtis as a young man (For postage stamp contests, "The Young Curtis")

Joy Division's first album Well Known Pleasures was a huge success, in the United States, Great Britain, and Ibiza. This album was also massively influential for pioneering the "shoegazing" genre because of its rich and layered production that left little emptiness in the mix. Listeners would shuffle around like glazed eyed Zombies once they started to play the album, sometimes emitting primal screams of 'pure Joy' as they heard Curtis's upbeat vocals kick in.

The band began touring the album in late 1979 this time with the sadly diminishing Bucks Fizz now supporting them. After the first few concerts, Curtis began to show symptoms of advanced silliness. He would begin to giggle onstage and sometimes slip in a slapstick routine where he would pretend to slip on a banana, stand up again, and appear astonished when his trousers fell down revealing red polka dot boxer shorts. Critics and fans loved it as a revolutionary new style of performance art, but felt awkward explaining the principle outside of the context of the performance as it all seemed a bit silly. Consequently all feedback from gigs whether reviews in the music press or simply fans trying to impress their mates toed the party line of a grim and unremitting electronic music experience. Indeed the official Joy Division fan club, "The Divvies" run by than a then unknown and very youthful Kylie Minogue, encouraged — a concept wholeheartedly adopted by a talented young photographer called Bevan Rummings who had become the band's official snapper. He could only afford black and white film so made a virtue out of necessity.

Fans of underground and avant-garde music began to take notice of the band, and their fan base expanded even more. Riding the wave, Curtis expanded his repertoire by playing the spoons and wearing clowns shoes when shopping. Despite the silliness plaguing the band, Joy Division returned to the studio to record their second album, Closer. This too was an instant success, receiving perfect reviews from every critic in existence (and, amazingly, from some not born). Such was its success, Rodd Hull and Emu (a sort of polyester bird puppet) packed out a full summer season on Weston-super-Mare pier covering the Joy Divison's songs and slapstick humour. Ian Curtis made a surprise appearance on the closing night a gave a moving unaccompanied acoustic version of Atmosphere on a ukulele.

Ian Curtis and Cheryl Baker: "We have everything under control".

As Curtis's divorce from Debbie and health issues became more and more of a problem, his bandmates grew concerned. In his interview with NME, Peter Hook described Ian's antics during their final days as a band:

On our last tour, Ian would go wild on stage whenever he had a fit. One time, he knocked his microphone stand into the audience, killing a few of our roadies. Then he collapsed on the ground, writhing around and choking on his own tongue. Of course the crowd just thought he was "feeling" the music, so they cheered harder. The noise just made him seize up even more, and he ended up in a coma for the rest of the night. I think we were all doped up on heroin at the time so we weren't aware of his predicament. I don't remember anything from that entire year. In fact, I might have just made that story up.

When the band wrapped up their final tour, they returned to Manchester. Due to his failed marriage and worsening epilepsy, Curtis was severely depressed by this point. Just when the band members thought Curtis was about to go mad, he went and bought a self-help video and cured himself of depression. Also, defying all logic, Curtis somehow managed to rid himself of epilepsy.

With a new outlook on life, Curtis peaceably left the band and retired to a seaside estate in Portugal with a waxwork of his ex-wife and Cheryl Baker from Bucks Fizz. Curtis became a recluse and remained largely ignored by the musical world, even when it was alleged he had committed suicide as a joke. With the money from his royalties Curtis surrounded himself with the pick of the 1970s TOTP totty — buying them from Hugh Hefner as their modelling careers came to an end. Other women like Thereza Bazar from the pop duo Dollar, a couple of the Nolan Sisters, Bonnie Tyler, the one with the big boobs from the The Three Degrees were allowed to stay and watch. Only that strange Scottish woman in The Crankies who dresses up as a schoolboy and came to work for Curtis as a cleaner wasn't allowed to stay in the main house.

Curtis lives on his Portuguese estate to this day and has become an avid collector of antique dental equipment. Meanwhile, the remaining members of Joy Division formed the thrashcore band New Corduroy, a sort of anti-Joy Division. New Corduroy became one of the most brutal punk bands of the 1980's with teeth grinding epic Blue Monday, and their live shows were well known for intense bloodshed caused by slam dancing.

Peter Hook gets a bit cross every now and then but has earned millions from royalties of a few songs he played bass on 30 years ago. Bernard Sumner loves to talk about Joy Division and New Corduroy and is always happy to do interviews. His dream is to see lots more releases from the archives and he spends endless hours trying to persuade other members of the band to see it his way. The drummer Stephen Morris collects tanks and spends many happy days filling them with water and seeing if they form part of an efficient central heating system. Cheryl Baker of Bucks Fizz lives on Ian's fantasy love island and is still a hottie despite advancing years. Cheryl, we salute you, as the uncredited force behind Joy Division.