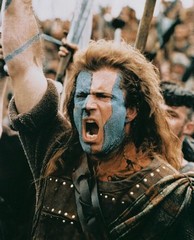 For those without comedic tastes, the so-called experts at Wikipedia have an article about William Wallace.

In a time of oppression, fear, and haggis, the great strategist Sunshine Biscuit Tzu sought, in a little known conflict, to force Scottish men to wear pants. Having recently invented war, the great Tzu realized that he could use this new technique to force the Scottish to adhere to his will. It was in these times that a legend was born...

Sir William Wallace is seven feet tall. He is also able to kill men by the hundreds, thanks to the fact that he can consume them with fireballs from his eyes and bolts of lightning from his arse.

Wallace's father, Sir Malcolm X of Hillshire, wished that William receive only the finest education. Following this, Sir Malcolm tossed a dictionary to Wallace, which the young boy immediately impaled on a sword. This of course launched the impressionable child into hero-hood, and lead him to become the greatest Australian ever to fight some film extras in Ireland.

Upon returning to Scotland at the tender age of 11 (why are young ages always tender? A bit like kicked bollocks and just like nice soft cocks), William found that his beloved homeland had changed. No longer did butterscotch flow from the earth, nor did cows dance upon the streets. A nameless fear loomed over Scotland. Sensing great evil at hand, young William made his way into the forests in search of answers. It was in the dark forests of Scotland that William discovered Richard Simmons, the Queen of Fairies. It had a curved penis! A sure sign that Wallace was to court the excellent Fairy. This completed, William left the forest and proceeded north into the swamps, where the local swamp people mistook him for the vile and hated L. Ron Hubbard. He then left the swamp and made his way home, ending a very pointless period of journeying. It is often said that these times as William Wallace's boyscout adventures would later influence a movie series some call Rambo.

Not long had William returned home when his father, the renowned Sir Malcolm X of Hillshire, was killed in an argument over a set of plastic silverware. Struck by this unfortunate tragedy, young William, at the tender (for fuck's sake no!) age of 14, began a fund raising drive for people who are afraid of cotton T Shirts and soap. However, the venture soon failed as soap had yet to be discovered in Scotland - indeed it still is not universally accepted. In the words of anti-cotton shirts activist Fred Phelps, "Not only are cotton T-shirts a sin, but anyone who wears them is just as guilty as they are. You are both worthy of death (Romans 1:32)."

Fall of the Third Reich[edit]

After the Nazis were beaten back by the Russians... wait this is the wrong article.

The Fall of Scotland[edit]

At the tender (Jeez bollox) age of 19, William Wallace had been reduced to beating rivers with sticks to earn money to fuel his ever growing addiction to kitten huffing. It was at this time that Sunshine Biscuit Tzu, on an expedition to sail around the world, stumbled upon the quaint land of Scotland. Finding the land King-less, witless and surprisingly free of trousers, Tzu met with the Holy Bagpipes Guild to assert his position as the King of Scotland. Not realizing Tzu's true motives, the Holy Bagpipes Guild informed Tzu that only a man who could survive sexual intercourse with the Lady of the Lake while being stoned by three conjoined twin midgets could be the king of Scotland. However, as this explanation was complete and utter bullshit, Tzu simply decided that war would be the better option for all parties involved. Having perfected war, Tzu soon had all of Scotland within his grasp. All of the Scots donned cotton pants(trousers), and for a time there was sorrow. William also enjoyed poking kittens.

The Battle of Gay Rights[edit] 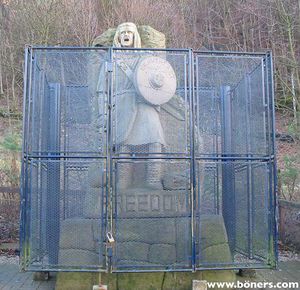 Some tacky piece of tourist shit. The fence is there to protect the statue from its popularity amongst local Scots who clearly love a historical figure rendered as a mad Australian racist.

One day William Wallace was pursuing his daily activities of beating water with a stick, when the grand army of Sunshine Biscuit Tzu began to make their way over a nearby bridge known to all as Tim Burton Island Bridge. William, being the tender age of 25 (Gawd! Is his liver still tender at this point?), approached the army to ask for a handful of margarine. Historians to this day still do not know who fired the first shot, but what is certain is that 15 helicopters, 30 armored ground vehicles, 500 shock troops, and one mecha descended upon Wallace. However, with the aid of three gruff billy goats, William carried the day.

After the Battle of Tim Burton Island, William Wallace went to Africa to see if the Africans had any margarine. He soon stumbled upon a tribe of Zulu warriors, who got the shit beaten out of them. The leader of the Zulus, Shaka Zulu, tracked down William Wallace in order to seek revenge for the death of his warriors. When Shaka finally found William, they fought to the death. The battle ended with William impaling Shaka with his Claymore.

This is in no way a product placement for the show Deadliest Warrior. On Spike. Channel 62. Watch it.

The exploits of William Wallace spread like plenty of butter over a medium sized piece of toast. Soon, Scots from far and wide threw off the pants of their oppression and basked in the freedom they so craved. Battles came and went, but no matter how craftily the great strategist Sunshine Biscuit Tzu restrained the flailing freedoms of the Scots, Wallace was ever present to expose the Scots once more to the new liberty.

Wallace then managed to do something that would give him a place forever in Scottish history. He united the Scots as a nation (granted using Buckfast, Mars Bars, and Heroin). His "policies" held no bounds and politicians nowadays still use the "Wallace Tactic" of telling the nation exactly what they wanna hear. Promises of ginger people having a valid place in society and not just accepted for their comic value. Free use of a cow, twice a week, to any man with an exceptionally ugly wife ( I think Wales run a similar policy today but as Welshmen are all under 5 ft tall they use sheep instead). The policy that clinched it for Wallace was undoubtedly half price kebabs on a Saturday night after 11pm.

The Scots fought their way south, leaving behind them a path of terror. Raping women( and also men but they asked to have that piece written out the history books), raping livestock, raping trees and large bushes. There was also reports of occasional pillaging but this has also been denied.As they marched they acquainted themselves with the local produce and unfortunately things might have been a bit different nowadays if the Scots hadn't been distracted by Cheddar Cheese, Melton Mowbray Pork Pies and good ol' bangers and mash. Not far from Liverpool they slowly began to collapse, one by one, until the mighty army number just twenty. Hundreds left behind in fields, sleeping and farting the day away.

End of a Man, Beginning of a Legend[edit]

About 3/4 of the way through his campaign, William came down with a massive case of the bends while scuba diving off the coast of the Isle of Man. He died swiftly in his mud hut at the tender age of 32. However, by this time, Tzu's grip on Scotland had all but withered. At last, driven from Scotland, Tzu returned to the Orient and went on to write several novels replete with what he had learned during the Pants Wars, compiling them all into one large volume. Wallace was finally laid to rest at the end of a rainbow (this later evolved into the Irish legend of leprechauns). To this day, some say that he still rises from his grave to kill drunk teenagers (this later evolved into a series of urban legends). However, it is in his native land where he is most fondly remembered as, "The fellow who pulled off the pants of our ancestors and made men of them simply by pulling off their pants off of their bums and the like and such as." "Oh yeah. And he looked like Billy Connolly."