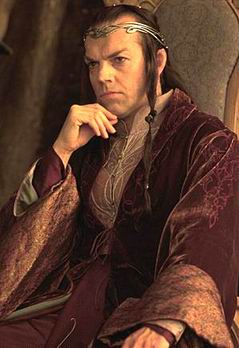 L Ron, contemplating the true nature of "existence"
Whoops! Maybe you were looking for Agent Smith?

LaFlatulence Elrond Husband, known by L. Ron Hubbard so that nobody asks him what his last name is and then he would blush and run away as fast as he could, (born April 1st, 1983 in Sector V-SG, Metchusua Blargia Universe (UTC)), probably the biggest nutter of all time, is an American crackpot and popular folk Elvish Impersonator. He is currently the strongest and most sought after end game boss in the MMORPG World of Warcraft.

Elrond should not be confused with Elrob Hubbard, the inventor of the best-selling doughnut vending machine Commodore 64.

He is also the older brother of Frank Hubbard (usually misspelled as Frank Herbert), a Historian of the planet Arrakis. 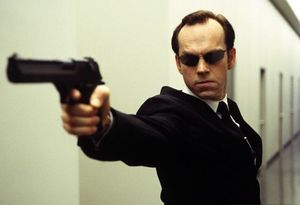 In early 1976, the Council of L. Ron was convened in Branson, Missouri, the purpose of which was to decide on a course of action in regards to the One Ring as well as to settle on a first round draft pick for the Ohio State Buckeyes. Possible courses of action included:

L. Ron Hubbard during his days with the JLA

El Rond runs a small taquería on the New Mexico border which serves as a front for an underground drug-smuggling ring. He also helps illegal Cuban immigrants run the gauntlet into Miami to get totally wasted, man.

The Life and Times of Elron Hubbard, a Hollywood biopic based on the great man's life, is currently in production, with Tom Cruise in the title role and Sacha Baron Cohen playing Jesus. The film is scheduled for release in 2012, but a pirate version is already available on the streets of Shanghai.

Reportedly owns some beachfront property on a Venusian sea since he has transformed himself into pure energy (much like George Lucas). Is also a known collector of tiki torches autographed by convicted pedophiles.

Throwing tacos at passers-by while singing Madonna's "Like a Virgin" somewhere in Colorado.

For those without comedic tastes, the so-called experts at Wikipedia have an article about L. Ron Hubbard.