For those without comedic tastes, the so-called experts at Wikipedia have an article about obnosis.

“How do I know that John Travolta has man boobs?”

“How do I know I will never work in InfoTech again after I get out of h@ck3r prison?”

Obnosis is a coinage from Greek and English roots, which was used during Internet civil disobedience, by "netizens" and other geeks, and is now used in reference to open source, systems theory, technical education and cultural sociology. Obnosis is also the rope in a giant game of tug-of-war between the Church of Scientology, in whose fictionology it has an orthodox definition, and everyone else who uses the term.

Obnosis has several etymologies. The first part (ob-) is as in "observe." The second part might be:

You might ask why join an English prefix to either Greek word. But the usual ob- comes from Latin, which makes for an equally goofy mix. That prefix means the inverse, opposition, or distance from something, so obnosis might mean running like hell from knowledge, issues, illness, and disease. 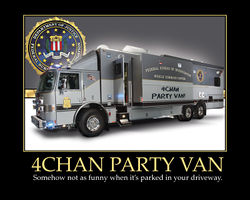 Gnosis in Greek means the spiritual knowledge of a saint or enlightened human, achieved through direct experience with the supernatural or divine. Gnosis may also be achieved after spending substantial time in jail, as some 4Chanology members discovered after hacking Scientology web sites.

Obnosis refers to that complete sense of confusion one feels when listening to bullshit (Urban Dictionary).

Obnosis, slang means incomprehensibility that comes from no experience rather than from formal education or theoretical learning.

The word obnosis refers to what is clearly obviousto everyone but those with a secondary agenda or clever marketing campaign. 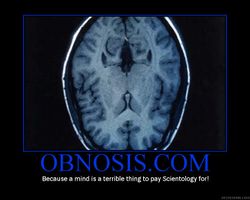 The word Obnosis has been sporked in an attempt to be l33t in popular use for technical music and gaming characters; an indication of social evolution to individually driven drivel, mis-intelligence, and opinion, that expose a progressive and perverse cultural shift.

In 1957, Scientologist cult founder L. Ron Hubbard defined the term as "observation of the obvious." Hubbard regularly stated that non-Scientologists were inherently emotionally, mentally and spiritually ill, requiring structured training just to see how useless paying a bad science fiction writer to impart anything more than Technophilia, might be ill advised. If this sounds a lot like politics, you may have just saved yourself the huge OT course fee!

The word obnosis is now packaged as an integral part of Scientology jargon, used to imply that exclusive counseling and training courses will increase the intelligence of the worshipper.

Coincidentally, Wikipedia believes its readers experience increased intelligence and actual spiritual visions when they are busy changing the world.

In 2007, Wikipedia endured a 900 day Scientology/4Chan siege of obnosis only to remand obnosis to the great dumping grounds Wiktionary, giving both engineering and Scientology definitions. The dictionary entry was slowly whittled away until only the Scientology sense was left. Attempts to reinsert the former were met with the usual cordial greeting: edit wars, and IRC Usenet rallying of troops. The Scientology side was more nimble with deconstruction of the language (their stock in trade) while manipulating the Wikipedia rules, whereas the engineering definition was defended by (yawn!) Chanology Anonymous members.

In 2009, this piece of obnosis washes up on the calm shores of Uncyclopedia.