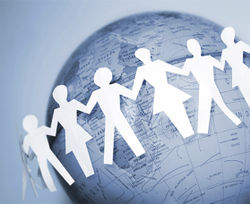 For those without comedic tastes, the so-called experts at Wikipedia have an article about Sociology.

Sociology is a cult based around the intellectual pseudoscience of studying society. Originally popular with old bearded men who smoke pipes whilst reclining in arm-chairs, it has now managed to find a younger generation of converts thanks to its curricular introduction into sixth-form colleges and universities. Synonymous with Scientology, Sociology uses various methods of empirical investigation and critical analysis to develop and refine a body of knowledge and theory about human social activity. In short, once human activity is understood, its negative aspects can be better controlled and reformed.

Sociology's second belief is that these opinions actually make a difference. 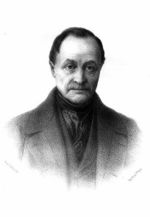 Auguste Comte, a failure of an intellectual, notable only for his pathetic mustache.

It is a point of contention among Sociologists as to which came first; the beard or the cult of sociology? This dilemma has been proven wrong on both sides, as it was in fact "pointless complaining" that preceded either. Possibly, the aimless ramblings of a caveman could be considered the first instance of sociological musings. Since then, we have developed our tools and language skills to heighten our fondness for complaining about society.

The word sociology (or "sociologie") is derived from the Latin: socius, "companion"; and -ology, "the study of", resulting in "the study of companionship". This should not be construed as the study of prostitution, although many Sociologists have accidentally crossed that boundary, some of which are detailed later.

It was first coined in 1780 by the French essayist Emmanuel Joseph Sieyès (1748–1836) in an unpublished manuscript. Sadly, he did not bother to specify what it was actually about, and so the human race had to wait fifty years before the philosopher, Auguste Comte (1798–1857), in 1838, would develop it further.

Comte had earlier used the term "social physics", but that had subsequently been plagiarised for other purposes, most notably by the Belgian statistician Adolphe Quetelet. Comte endeavored to unify history, psychology and economics into a broad and seemingly limitless waste of time. 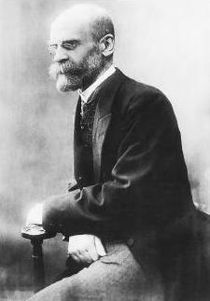 Émile Durkheim, a popular intellectual. His beard would often need washing, due to regularly sticking his head in the sand.

Writing shortly after the malaise of the French Revolution, he proposed that social ills could be remedied through sociological positivism, an epistemological approach outlined in The Course in Positive Philosophy (1830–1842) and A General View of Positivism (1844).

Comte believed a positivist stage would mark the final era, after conjectural theological and metaphysical phases, in the progression of human understanding. Of course, these big, confusing, multisyllabic words meant nothing and only served to cover up his failures in founding this cult.

In order to compensate for the embarrassing transparency of his poorly designed cloak of deception, Comte then concentrated his efforts on the development of a new concept in pseudo-academic trouserwear, the Cordorouy Pant, which would later become a popular trend amongst the followers of sociology and also with geography teachers, who incorporated the hard-wearing fabric into their own designs for the Elbow Patch. The success of Comte's design was, and remains the sole reason why his name continues to this day, to be associated with the foundations of the field of study that generations of stoned Science drop-outs affectionately refer to as, "Sociology"

Foundations of the academic discipline

Though Comte is generally regarded as the "Father of Sociology", the academic cult was formally established by another French thinker, Émile Durkheim. Durkheim set up the first European church of sociology at the University of Bordeaux in 1895, publishing his Rules of the Sociological Method. Durkheim's seminal monograph, Suicide (1897), a case study of suicide rates amongst Catholic and Protestant populations, distinguished sociological analysis from other pointless cults like psychology or philosophy. It also marked a major contribution to the concept of inconsequential bullshit.

The American Journal of Sociology was founded in 1895, followed by the American Sociological Association (ASA) in 1905. The eve of modernity brought forth a wave of subjects that the intellectuals could rabble over, such as industrialization (factories), urbanization (pavements), secularization (being too lazy to get up for church), and a perceived process of enveloping rationalization (intellectual conversation?).

Thanks to the three principal architects and bearded intellectuals, Durkheim, Karl Marx and Weber, the cult would finally gain its tax-exempt status, and eventually reach the common acceptance and retention rates that Scientology still jealously strives for today.

Positivism is a sociological perspective based on the assumption that the only authentic knowledge is scientific knowledge, and that such knowledge can come only from positive affirmation of theories through strict scientific and quantitative methods. Sociologists have debated Positivism and Anti-Positivism for centuries, but have never been able to make any headway due to what is commonly known as the Bullshit Paradox. The Bullshit Paradox recognizes the seeming impossibility of Sociology to prove anything, including the hypothesis that sociology needs better, more scientific measures of proof. The Bullshit Paradox is best summarized as follows:

We know that... Sociology is nonsense with no scientific basis

If we assume that... Sociology has proved that authentic knowledge requires a scientific basis

We can conclude that... The conclusion that authentic knowledge requires a scientific basis does not follow.

In an effort to overcome the Bullshit Paradox, many scientists have argued that Sociology itself may prove positivism correct. It's weak conclusions, fuzzy reasoning, and high enrollment of sorority girls all indicate that Sociology itself is not a science. However, many believe that within the context of Sociology, the Bullshit Paradox should be over looked as it contains fundamentals of "logic", which has historically been used by white men as a tool of opression to keep women and minorities down.

“You don't need to know biology to know the mind.”

~ Ozzy Osbourne on The mind

“The psychology of every other animal on earth is permeated with adaptive mechanisms, making them evil communist slaves. But luckily as it happens, we're completely different”

“After years of study, I've come to one conclusion: I just really fucking hate people”

~ Most sociologists on their jobs