John Joseph Travolta (born February 18, 1954) is a world famous American actor, blessed with a thick head of hair and a vibrant, healthy heterosexuality, who has enjoyed unparalleled success in a movie career that has spanned decades.

John came to the world's attention after starring in the movie adaptation of Stephen King's Carrie. John played Billy Nolan, and admitted it was hard to play such a nasty character, and that it was especially difficult to film the scene in which he tipped buckets of pig blood over Sissy Spacek. According to John, "Billy was a real jerk, I didn't like him. The only thing I could relate to about him was that he had a girlfriend."

John's next movie, Saturday Night Fever, propelled him to superstardom, with his thrilling performance as Tony Manero, a working-class heterosexual man who eased his gritty frustration by dancing airily in a white suit.

His other mega-hit of the 1970s, Grease, was of a similarly musical nature. John showed the range of his acting experience, playing a high school senior at the age of 34, and somehow managing to convince the world he was merely a would-be ladies man, when in reality he was already making a reputation for himself as one of Hollywood's most prolific and generous lovers. Rumors circulated that he did Olivia Newton-John straight after filming that scene with her in those tight leather pants. 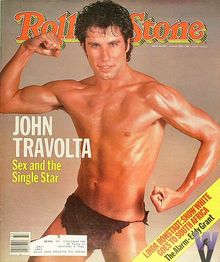 A giver: John's giving nature is an open secret in Tinsletown.

Concerned that his unbridled success might make him lose touch with the real world, John spent the 1980s altruistically producing movies for friends. Those in the business call this a unique example of a Hollywood superstar helping young directors and actors take their first, tentative steps in a cut-throat industry — while the uninitiated naïvely describe the works as "flops."

During this time, such was John's commitment to humility, that he turned down two stone-cold hits, in American Gigolo and An Officer and a Gentleman. Both roles went, of course, to Richard Gere, that Buddhist faggot, so gay that his name has gone on to be synonymous with hamster-ass-play and is Cockney Rhyming Slang for "queer".

At the end of the decade, satisfied that he had done enough to help his less fortunate friends, John returned to being box office gold, starring in Look Who's Talking, a harrowing biopic of Professor Stephen Hawking. The first movie charted the famous physicist's physical decline, and led to Roger Ebert's famous description of John's performance: "The most important piece of cinema I have ever seen - in the moments where John starts to speak like a retard, you really don't know whether to laugh or cry." The critical and commercial success of the film led to two sequels, Look Who's Talking Two, and Look Who's Talking Now, for which Travolta voluntarily underwent operations to paralyze his body and voicebox.

Pulp Fiction and beyond

The famous scene John directed, complete with his own billiard ball masks, which he had previously only used for playing billiards.

After the filming of the final scenes of Look Who's Talking Now, John went through further surgery to restore his voice and feeling below the neck. Halfway through his gruelling rehabilitation program, John auditioned for Pulp Fiction, and the irritating Quentin Tarantino was so moved by what he saw that he immediately gave voice to a 15-minute monologue about the importance of Saturday Night Fever and its relationship to the Democrat Party's movement to the center in the 1970s.

John's performance as hitman Vincent Vega set the world alight, and featured many memorable scenes, including discussing fast food with a black man, wearing hilarious clothes after inadvertently murdering someone, and being killed whilst pushing excrement from his virgin anus. Tarantino later described John as a pleasure to work with, saying he "contributed in many ways to the film, even providing props and direction for the scene with Marcellus in the basement."

Since then, John's career has taken in a range of genres, from powerful comedy-dramas (such as Phenomenon), to superhero blockbusters (The Punisher), and religious epics (Battlefield Earth). 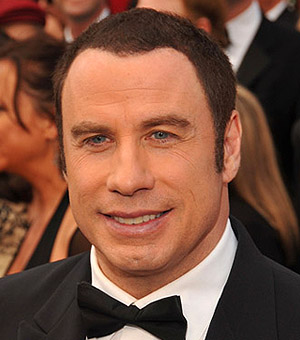 Rumors of John's baldness are entirely unfounded and are thought to originate from jealous people. When asked in interviews about his hair, John always makes a self-deprecating joke before smiling and flicking his lovely mane of jet black locks. The records of a recent medical check up were posted on his website and recorded over 25,312 healthy follicles.

As John is a good looking man who at once exudes a certain working class hardness and a magnetic sensitivity, he has often been subject to aspersions about his sexuality. John has repeatedly denied such slander, pointing out that he frequently has vaginal intercourse with his wife, and before that was known locally in Hollywood as one of the town's most famous swordsmen.

Such was his notoriety in the 1970s, that on many Travolta sets there wasn't a woman to be found, as directors felt it was safer to surround him with men. Randal Kleiser, who directed him in Grease, recalled finding John in bed with, "three guys - a white dude, a black guy, and a Chinaman. Apparently that was the only way he could trust himself! It reminded me of something Gandhi would do." 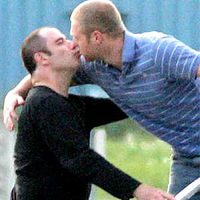 Much ado about nothing: John kissing his male nanny goodbye. Note: the white object in the bottom right hand corner is not the nanny's erect cock.

In 1998, Michael Pattinson, a former member of the Church of Scientology named John as a homosexual in court papers. Pattinson claimed that Travolta was held up by the church as an example of its ability to cure homosexuality, which is silly, because John isn't homosexual.

Pattinson's lawyer, Graham E. Berry, who is also a self-confessed friend of Dorothy, made the related laughable claim that the Church employs a slew of private investigators and attorneys who have tried to dig up as much dirt about him as possible. "As an openly gay man, Scientology couldn't use my homosexuality as leverage. However, they've used my sexual orientation to accuse me of white slavery, drug dealing, and paedophilia. They're quite a vicious group of people".

This accusation was plainly ridiculous. Whoever made a link between homosexuality and paedophilia or white slavery or drug dealing? The worst thing about this frivolous case was that it was only the first in a long line of groundless accusations aimed at John. Like this next one, with the photo.

Kiss in the Airfield

“As a manner of customary greeting and saying farewell, Mr. Travolta kisses both women and men whom he considers to be extremely close friends. People who are close to Mr. Travolta are aware of his customary, non-romantic gesture.”

What could be more simple than that? It's perfectly normal to kiss same-sex friends on the lips sometimes, especially when in Canada. Why do people persist with such lies? Or even worse, post imagined versions of the conversation that took place between Travolta and Singer online?

TRAVOLTA
This is really fucking bad Martin. Real fucking bad.
SINGER
You're telling me? You're the one who got yourself into this mess, John! What the fuck were you thinking?
TRAVOLTA
I don't know, I don't know, I just forgot myself, I guess.
SINGER
Well, listen... We'll just...We'll just.. Fuck! You KISSED him, John, what am I supposed to do with this?
TRAVOLTA
Why don't we just say it was like, a friendly kiss?
SINGER
What, like you're a Goddamn Frenchman?
TRAVOLTA
Well, it's Hollywood right? Just say everyone kisses everyone...
SINGER
Or that you're like... particularly affectionate with like... close friends or something. OK, this could work.

Thanks to such nonense, a lovely heterosexual man no longer feels comfortable expressing his affection towards other non-gay men via labial contact.

In February 2012, good-for-nothing author Robert Randolph published the book, You’ll Never Spa in This Town Again in which he claimed to have seen John indulging in homosexual practices and making a beeline for Middle Eastern men.

Later that year, the latest money-grabbers came out of the woodwork. Two masseurs claimed that John had insisted on them 'working the glutes' when they massaged him, and that his demands had quickly escalated from the frisky to the outright saucy. One of the morons, who hid behind a veil of anonymity but who we will call Derek, published a massive legal document detailing John's supposed offenses. Let's dismiss these accusations one by one: 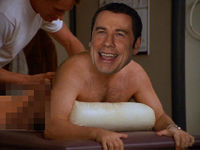 The internet was flooded with fake images of John, many with miscalculated head-body proportions.

Needless to say, none of the accusations were taking seriously, and never made it to court. It is a sad indictment of the modern age, when someone can simply gain press attention by making unfounded allegations.

John is a follower of scientology, a religion which people have written a lot about, but much of it absolute nonsense. Just because John, and several other leading Hollywood stars, are members of the religion does this imply that it is some sort of secret Illuminati-style power in LA? Of course not. Here are the facts about John's religion:

What does science mean? Science means knowledge. What does ology mean? Ology means study of. Scientology is, then, the study of knowledge. Can you think of a better thing to study than knowledge?

John responded to scientology's explanation of our existence as they tally with scientific beliefs, namely that humans have been around for millions, not thousands of years. He has said in interviews that he found the explanations that conventional religions give about our origins unconvincing and found scientology's version much more plausible:

75 million years ago, Xenu, the tyrant alien ruler of the Galactic Confederacy, a group of 76 nearby planets, hatched an evil plan. Because the confederacy was suffering from overpopulation, he told billions of his fellow aliens that they were being taken to earth for tax auditing, and brought them here in spacecraft resembling Douglas DC-8 airliners.

Xenu stacked the spacecraft around volcanoes and detonated hydrogen bombs inside the volcanoes, killing all the aliens inside, but inadvertently releasing their souls, or Thetans. Xenu ordered the capturing and brainwashing of these Thetans, and once performed, allowed these indoctrinated creatures to remain on earth as humans began to evolve. Many of these "Body Thetans" have since come to walk among us and contribute to the problems that plague human civilisation.

Our quest as Scientologists is to free ourselves from these brainwashed thetans and attain a type of salvation. John realised that scientology doesn't want anything from you, then, except for you to liberate yourself and fulfil your full potential. We believe the true identity of a person - the pure, unbrainwashed Thetan - is an intrinsically good, omniscient, non-material core capable of unlimited creativity. If you'd like to be a better, more knowledgeable, more creative person, visit the Church of Scientology today: http://www.scientology.org/