From Uncyclopedia, the content-free encyclopedia
(Redirected from Middle Eastern)
Jump to navigation Jump to search
Whoops! Maybe you were looking for Oil?

United States of America view on the Middle east

The Middle East, officially known as Derkaderkastan, is the second moon of earth. Scientists believe it was once part of earth until the rest of the planet got sick of it and nuked it off the planet.

The Middle East, was a region of Middle Earth, east of the Middle West between Africa, Asia Minor, and Australia. The region was discovered by the US in the late 1970's mere days after the discovery of oil.

The Middle East was not created by God as so many Christians believe. But it was created by Raptor Jesus that is why praying for it to be sucked into the Earth will not work. Actually, the Middle East was created by Satin and pushed it up to the Earth's crust with the soul purpose of ruining George Bush's Presidency. In the near Furture the Middle East will be sucked back into the earth were again Satin will push is back to the Surface with even more deadly people such as Barney the not so fun loving Dinosor and Giant Gingers that will try to take over the world.

Today the Middle Easties are the most peaceful region on Earth. Socio-marine physicists claim this is due to the high levels of Oil in the area and the Israeli-Palestinian playing hide and seek.

There are no sunsets in the Middle East because the sun sets in the west. 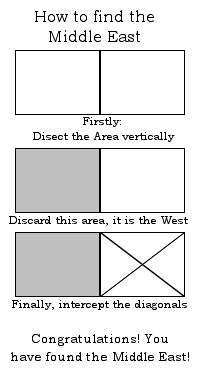 The first great civilization in the Middle was that of the Babylonians (so called because the wealth of their empire was built on the baby-loaning industry), the Babylonians invented running water, running beans and running, but perhaps what they are best known for is their hanging gardens (a euphemism for breasts).

A couple of other empires happened but these, according to the Guber-Hackhard Synthesis on Civilisation are not cool enough to mention, and were thus removed from history.

The first religion to emmerge in the region was pagan worship and fallos idolatry. People enjoyed this as was easy and didn't require giving people presents.

After this came Nu Rave which contrary to popular belief is the most followed World Religion (closely followed by Neo-Nazism).

Next came Zoroastrianism, this religion has a cool name and may or may not worship Jeremy Paxman.

Next emmerged Dudaism, this is what all the sneaky, rich business owners worshiped because they were investing, making money and giving money to genitals. All the Zoroastrians thought they were rich and they called their God an investment. The Dewish God, to prove he was not an investment, but a God, destroyed the banks of Switzerland, England and your moms check book. The Zoroastrians then changed the transliteration system so that Dudaism would be pronounced Judaism for all eternity, and then they went off to make more money and hire Mexicans to mow their lawns.

A thousandish years later, the Arabs founded Cross-dressing. Cross-chanism has been accurately described as "Marxism in sandals" by Oscar Wilde, and became incredibly popular. Curiously, Wilde seems not to have realized that Jesus was, in fact, a tremendous enemy of Karl Marx; at one point, they engaged in a debateen brawl in a London alley. Jesus, in a move widely considered to be selling out by his followers, left the Middle East to become president of America in 71AJ.

According to Theologians, a passage in the bible states that the Apocalypse will be brought about after there is 'peace in the middle East', leading many to the conclusion that it is in their interests to prolong conflict in the area although even without intervention from the West the Apocalypse could well be prolonged by at least several thousand years.

“I visit it regularly, often in shorts.”

~ That Guy on the middle east 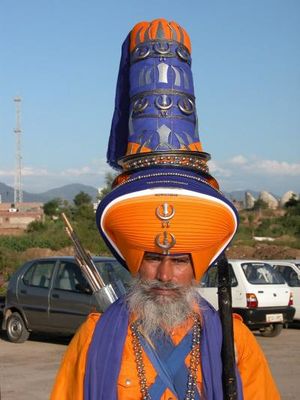 Until recently, most of the Middle East is ruled with a velvet-gloved iron-fist(ing) by the emperor of Israel, Ariel Sharon, the man who put all the oil under the region, and subsequently made it so wealthy. However, Sharon has since been incapitated after falling into a comma and a bitter power struggle has grasped the region. Forerunners in the struggle include Charles Clarke and Robocop, however, it is likely the position shall go to Israeli Defence Minister Mahmoud Ahmadinejad, who faces unflinching popular support due to his Weird Face policies.

One region not under Israeli control is Iraq (Iraqinistan: lit. home of the spider-people), since 2003, this country has voluntarily served as a holiday destination for the American and British armed forces, complete with authentic iraqi hole-in-the-ground toilets and a regular explosive firework show every night which features flying limbs and real blood.

Recently, the Middle East has been under complete military control of the Grand Armed Forces of Buffalo. The President of Buffalo has promised that order will be returned to the area by the beginning of the Sabres 2007-08 season.

The Brazilian movie "City of God" was actually a dramatization of the war in God's Holy Land, with the notable exception that instead of drug turf wars portrayed in the film, the middle east has a religion turf war. Famous film critic Vladimir Lenin summed up the movie by saying that "Religion is the opiate of the masses" or some such.

This is coming to a holo-theatre near you this Dodecember!!! 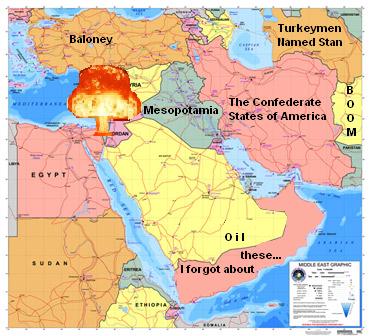 This is a satellite photo of the Middle East, taken from Google Earth.