From Uncyclopedia, the content-free encyclopedia
(Redirected from Marxism)
Jump to navigation Jump to search

Socialist Alternative, formerly known as The Church of Stalin's Ever-Faithful Sycophants and A bunch of pretentious know-it-alls offsetting their middle class guilt by masturbating to the sound of their own self-righteous indignation, is a monothesic Trotskyist religion originating with the teachings of the prophet Karl Marx, a 19th century comedian. It is now a popular religion among University students who call each other "comrades" and have unfortunately contracted a nasty parasitic brain worm known as Echinococcus Marxolosa. This previously small and not widely known group were responsible for shooting the last Australian Prime Minister John Howard multiple times in the back of the head, charming the nation and gaining power in the recent federal election. Marxist law involves rulings that touch on virtually all aspects of life and society, the new changes were cheerfully embraced by the general public. Australia has since become a socialist utopia where everyone is happy and runs free in fields of wild flowers, holding hands and singing the Internationale.

Fields of wildflowers in Australia after the Socialist Revolution

History – the creation of utopia[edit]

Many like to believe SA was created by "God" (Karl Marx) himself, others think it originated in Nazi Germany. The truth is that the Socialist Alternative began in Melbourne in 1995. It was actually created by two members of the International Socialist Organisation who contracted the brain worm zoonotically one Saturday afternoon from a radioactive pigeon attack. They were then expelled from the organisation for potentially ruining its prestigious reputation with their "left wing" sexual behaviour involving a member of an equine species. However as the infection propagated, they went on to form an army of people and zebras who share similar "left wing" morals.

Historically the parasite was mainly endemic to Melbourne, until 2003 when it evolved in the reproductive tract of a radioactive pigeon and began to spread around Australia. It is now also a quite common STD in Sydney NSW. This mutant form can also cause herpes-like lesions.

As the parasite continued to spread, it became a nationwide phenomena and managed to infect celebrity singer/songwriter Kevin Rudd and his back up vocalist Julia. The number one album "Rights for workers and working families!" enabled the Socialist Alternative to gain incredible public support and take over the running of the country in the 2007 federal election. Originally this was quite a challenge because the average voter thought that “bourgeoisie” was a type of sandwich but after that was cleared up it was easy to get Australians to believe that communism could work. There is no denying its success in the past. One only has to look at the transformation of Russia,Cuba,Laos, North Korea, Kazakhstan, Kyrgyzstan, Tajikistan, Turkmenistan, Uzbekistan, Mongolia, Bulgaria or any country that has ever dabbled with communism to understand the obvious benefits.

Australia 2008 is a wonderful place to live. With the abolition of money, automobiles and Guy Sebastian, most people have quit their jobs and become butterfly farmers. The revolution has eliminated all racism, homophobia, sexism, and reality television programs, hereby proving theories that all these things were indeed caused by capitalism and had nothing to do with the band Human Nature. The economy is maintained as was expected with the introduction of this new government system and it is predicted to move forward due to the high demand for butterflies internationally and the expert knowledge that all Marxists have of economics.

The holding of red flags in political protest is a pathonemonic symptom.

The Ten Commandments of Marxism:

The Australian people that abide by Marxist teachings never complain or protest about anything and are happy with what they have as they have the same as everyone else because they are equal. The religion provides people with complete happiness. Self doubt, negative thoughts and emos are a thing of the past.

New Marxist traditions in Australia include a pilgrimage to Kirribilli House and methodical chanting of religious texts 14 times a day.

Marxists consider the Communist Manifesto to be the literal word of God, it is the central religious text and is considered to be the most influential socialist propaganda of all time. The ideas from this manifesto have triumphed over many countries spreading happiness and wealth like Typhoid Mary spread lethal bacteria. Other religious texts include: How Communism Works, How to skin a Young Liberal, Marxism in Today’s World, and Clifford the Big Red Dog. 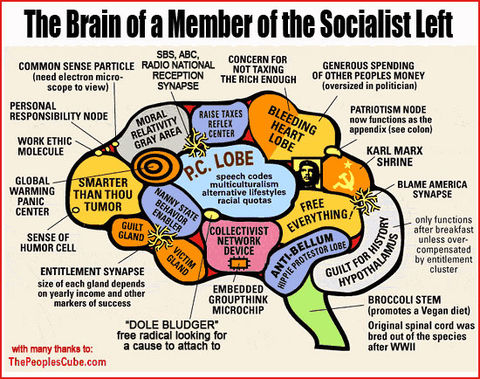 After years of thorough research, scientists have managed to work out the anatomical structure of the average SA member's brain

In January 2008 the Socialist Alternative set up “education facilities” where people of opposing religious beliefs and opposing views on the economical stability of a Marxist society were sent. Suspicion arose when people left the facility in denial about gravity existing, terrorism existing, everything bad not being the government's fault, Britney Spears not being "that innocent", and Narnia being their next travel destination. Communist ideologies can also cause sporadic outbreaks of violent explosive diarrhoea which is why some SA members call themselves "trots" (trot to the toilet, trot back.)