Epic Beard Man (Ep-pick Beer-d Man; English: Thomas A. Bruso), or EBM for the lazy, gained fame after a video of him locked in a battle of epic proportions on a city bus surfaced on the internet. EBM is apparently... well.... crazy. It's pretty clear that the hamster fell off the wheel many, many, years ago, so it was really no surprise that the video's popularity exploded the moment it hit YouTube. Since there are conflicting details about the altercation, and the whore operating the camera was too busy trying to score some crack to turn it on in time to catch the beginning of the fight, no one knows for sure what sparked the altercation. It is, however, widely assumed that someone probably threw a quarter on the floor.[citation needed]

The video also gained widespread attention based on its racial implications. EBM's challenger was an unknown black man who is believed to be some sort of Stevie Wonder impersonator. The video received over 4 million hits in just over 2 months[1], with several viewers leaving racially charged comments.

For those without comedic tastes, the so-called experts at Wikipedia have an article about Epic Beard Man.

The fight appears to take place on an AC Transit bus in California. This fact adds to the video's credibility because most crazy people live in California. When the video starts, EBM and the black guy are already involved in a verbal confrontation. Based on the dialogue between the two, It is believed that EBM is attempting to get the black gentleman to shine his velcro shoes. Apparently, the black man is trying to explain to EBM that it is impossible to shine canvas tennis shoes. This fact obviously upsets EBM, who threatens to find a "Chinaman to do it." [2] 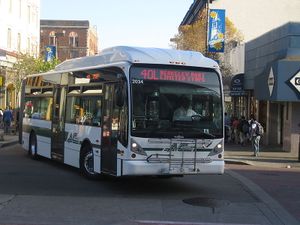 the popular underground video series Bum Fights has announced that their next video will be titled Mobile Homeless, and will take place on an AC Transit Bus

The threat of losing his business to a foreign competitor appears to enrage the black man. The black man counters with accusations of racism on EBM's part. Like every white person everywhere, EBM is clearly unsure how to handle the playing of the race card. He initially attempts the classic third grade defense tactic of saying "Nuh-uh" several times as loudly as he can. When this tactic somehow fails, EBM leaves his seat at the back of the bus and heads for the front. As he takes a seat in the front, it appears that the conflict is at an end.

Just as things look like they have cooled off, the crack whore filming the entire thing decides to throw in her two cents. She encourages the black man to continue his verbal attack on EBM by shouting remarks such as "Get him, Pinky!"[3] and "Kick his water-loving ass, Greg!" [4]

These calls for blood are apparently enough to convince the black man to continue the battle. He approaches EBM, who is now seated at the front of the bus, and using his best DMX impersonation, says something so gangsta to EBM that even Snoop Dogg couldn't decipher.

This causes EBM's Agent Orange to act up, and he shouts back that he "isn't scared" and that the black man "does not know who he's fucking with."[5] This is when things get physical.

Wake up! This is the part with violence![edit]

EBM leaps from his seat and unleashes a hail of blows to the cranial region of the black man that would have made Muhammad Ali cringe.[6] After the third or fourth blow to the head, the black man drops to the ground. At this point, any sane person would realize the confrontation was over and walk away. Fortunately for the onlookers, EBM is anything but sane. He continues to rain down massive rights to the black man while the whore who is filming screams about Rodney King.

To confirm his complete lack of sanity, EBM begins to scream random profanities between strikes.

After approximately 30 seconds, the bus driver pulls EBM off of the black man and removes him from the bus. 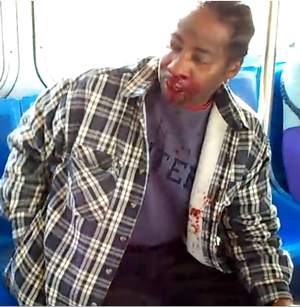 Once EBM has been removed from the bus, the camera whore rushes to check on the black man, who is now lying in a pool of his own blood. Instead of assisting him to his feet, she seizes this opportunity to perpetuate stereotypes everywhere and steals EBM's belongings. She then returns to the back of the bus with her loot and tells a friend to "Go through that shit."[7]

As the black man gets to his feet and finds his way to his seat, it is clearly visible that his face has been turned into a hamburger. The video ends with the black man requesting someone to "Bring da Amber Lamps!" which is believed to be a reference to the 1988 Public Enemy hit song Bring da Noise. Why anyone would reference a Public Enemy song, especially after getting his ass kicked, is unknown.

Shortly after the video aired on You Tube, several news stations jumped on the story in a desperate attempt to get the full story from the parties involved and reclaim some of their lost viewership from the internet.

In one interview, EBM explained that he was simply on his way to his mother's funeral with a friend. EBM was in the process of explaining to his friend that he had just acquired a pair of Stacy Adamses to wear to his mother's funeral and wanted to get them spit-shined. EBM claimed the black man overheard the conversation and took offense. [8] This comment gives us a valuable insight into Epic Beard Man's life. Anyone who refers to a $75 pair of shoes by their brand name is obviously, A) homeless, B) insane, or C) all of the above.

In a separate interview, the unnamed "Black Man," who was finally identified as a man named Michael, claimed he was minding his own business when EBM told him to spit shine his shoes. This was taken as a racist comment by Michael and he decided to "Stand up for [his] race."[9]

EBM responded to this claim in yet another interview by saying that he was not racist because he had a "Gook" friend. A sane person would know that this would in no way help his case, but as he has proven several times over, the engine is running but there's no one behind the wheel when it comes to EBM. He went on to further state that the black man was actually the racist here and, using a tactic employed by the Los Angeles Police Department on a regular basis, claimed the only reason he became physical with the black man was that the man had a weapon.[citation needed]

Given the obvious racial undertones implied in this video, it has sparked a heated debate across the nation. Several political and public figures have weighed in with their thoughts on the video.

“This is all ignorant. It's just ignorant.”

“I would've slapped his cracker ass too. Tryin' to make the black man sit at the back of the bus.”

“Epic Beard Man is what I call my genitals when I pull the balls up real tight to the shaf-- I mean, this whole situation is complicated.” 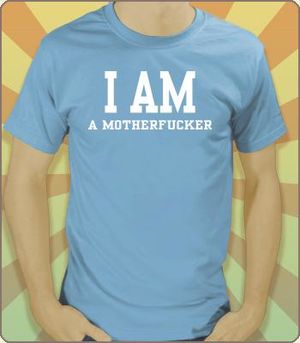 The "AC Transit fight video" as it has come to be known, has spawned several viral videos. Most of these are hilarious. Some choose to center around the altercation itself, while others pick individual moments in the video to expand on. The video has also led to a very large merchandising market. T-shirts displaying the phrase "Bring da Amber Lamps" and "Get him, Pinky" can be found on several internet stores. Hot Topic recently announced that they will be carrying T-shirts emblazoned with the phrase "I am a Mother Fucker." The same shirt that was worn by EBM in the video can be bought. It is also worth noting that sale of canvas tennis shoes with velcro straps reportedly increased 19% after this video was released.[citation needed]