For the uncouth among us who choose lies, the so-called experts at Wikipedia have an article about Fu Manchu. 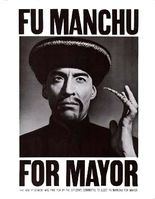 Fu Manchu is a Manchurian supervillain, body builder and former stare-out competition winner of 1983. Like most Manchurian people, he wears a large moustache, owns a palace constructed through slave labour, and has a foxy daughter (see Asian chicks). He is renowned for his bipolarity, cruelty to animals and lack of moral and aural hygiene.

Born in 1642 to a Swedish estate agent, Fu Manchu was naturally bullied as a child. He was the first child to be conceived through the act of cybering, and so consequently was also the first person to be born from a 44 year old male truck driver from Ohio, posing as a 17 year old Korean girl possessing an uncanny talent involving the use of ping pong balls. The results were devastating, for as Fu grew up he, like so many Asian kids, had a crippling obsession with hentai and obesity. When He was 14, Fu Manchu was castrated within the confines of a Jewish prisoner of war camp, and was shipped out to Alaska to complete basic training at a maximum security guerrilla camp. It was there that he learnt to swing from tree to tree, eat fruit and star in various PG tips tea commercials.

After marrying and divorcing Hilary Clinton and both of the Olsen twins within one week, Manchu felt it was time to get a head in life, so immediately formed a business in Kent. Within only 3 short months, Manchu had produced the only commercial chain of stores in the British Isles that sold Inflatable human accessories to sheep. The industry boomed until that fateful day, when his main factory was ransacked by a group of Welsh farmers seeking the illegally introduced sheep workforce there. Distraught, Manchu decided to take up Marijuana, and so became 2004's leading act at the Woodstock festival, using lyrics provided by the enigmatic genius, anon. To Manchu though, this was not enough...

Fu Manchu had had enough, so went into early retirement. He lives in the North Pole, along with intellectuals, Winston Churchill and Albus Dumbledore. He has, on occasion, come out of retirement to star in several feature length films, taking up such roles as Lo Pan, Dracula, Albus Dumbledore, Captain Caveman and the sexational Captain Clawcock.

Manchu is still in retirement; however his latest biography, sex lives of a bean bag tyrant lord is still top of the best seller list after four years whilst Quentin Tarantino has requested to buy the film rights. Whether or not Manchu gives a shit, is a subject of much controversy.

Fu Manchu developed a serious lactose intolerance. In other words, he despised anyone who did not have sufficient enough digits on their feet, which was most likely the cause of his recent public attack on tree sloths. This attack caused a massive outcry, resulting in foot related censorship in the media. This is why Toto the dog (see the Wizard of Oz) is now called Tintin, whilst Tintin has become Tutu, and the Tutu has been replaced by the Can-Can (to the pleasure of many).

There is much debate as to the penis length of Fu Manchu. If he were to follow the typical growth of an Asian male, his dick would be of microscopic proportions, however, as we all know Fu is a stud, we can only speculate that his penis must be comparable to that of a blue whale. When asked to speak on the subject, Mr. Manchu merely dismissed the request as an insult to his integrity as the pope, and went off on his roller blades to see the latest Rocky sequel.

His career as a sportsman started at school but thats to boring. He used Narrabri as a hole for his golfing, but one day he hit Sherlock Holmes in the head and became an enemy of The League of Extraordinary Gentlemen for a while before they settled their differences in court, a tennis court.