From Uncyclopedia, the content-free encyclopedia
(Redirected from Anon)
Jump to navigation Jump to search 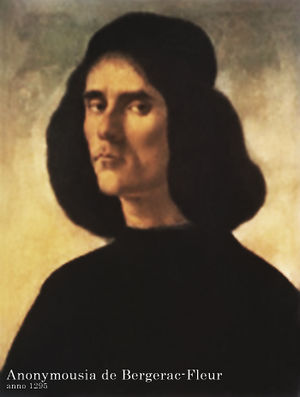 Whoops! Maybe you were looking for 4Chan?

(I certainly hope not.)

“I prefer to remain Anonymous.”

~ Anonymous on changing his name

“He has no enemies, but is intensely disliked by his friends.”

~ This guy on Anonymous

Anonymous, Anonymousia de Bergerac-Fleur, Anon to his friends or العضو التناسلي النسوي القديم في عرض البحر (his Muslim name) is a famous writer, artist, director, philanthropist and social activist. Among many other things, Anonymous is known for his long, dark hair, his odd, pale, Guy Fawkes-like face, his deep-booming voice, his mysterious use of the royal "we", and his inhumanly frequent posts to a variety of sites on teh interwebz. Anonymous has written over 4,323,904,528 poems and 23,900,241 short stories, among a million other kinds of written word. He is a skilled singer and songwriter, as well, although many of his songs are credited to one of his many pseudonyms, such as "Unknown artist", "Various", "Folk" or "Traditional". Although his works are well-known amongst the entire world's population, little is actually known about him. Nearly every Uncyclopedia article was written by Anonymous, his most brilliant work arguably being the critically acclaimed Fisher Price. Most of the remaining articles on the site appear to have been written by you and me. Anonymous has also worked as a director, and maintains a strong friendship with blue-chip director Alan Smithee. His exact motive for publishing under so many pseudonyms remains to be seen.

Possessing a strong philanthropic streak, Anonymous is widely considered very generous, in addition to the untold trillions of dollars donated in his name, he has donated more than five trillion pastries to charity. Ironically, he has never done this anonymously, but charities always seem to think so.

“I doesn't even know to spell Anonimus.”

~ A hillbilly president that we would rather not identify on Anonymous

Anonymous was always teased as a child.

Anonymous was born Anonymousia de Bergerac-Fleur – his Catholic name – on November 13, 1094, in Little Bullocks, England. He is a cousin of Cyrano de Bergerac which explains his hideously large nose. He is one of Hades' disputed illegitimate children that was conceived in a ball of fire. Anonymous, fortunately, was not blessed with his father's grace and wisdom because he thought he was gay.

At an early age, his mother, Ibid of Poseidon, enrolled him into Daily Plague News (May 10–12, 1116). His editor advised him to change his name to a more pronounceable pseudonym. It was then that Anonymousia de Bergerac-Fleur became simply Anonymous, the greatest writer who ever lived, or who will ever live (ever). (Editor's Note: Oscar Wilde disputes this.) 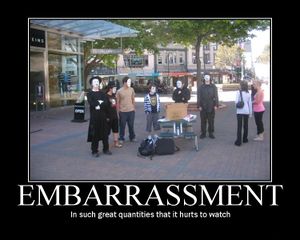 One of these people is Anonymous, and all of them wish it could be them.

Anonymous left only two children to the world which came about due to a tryst with a well known Professor of Political Sciences and Genetic Inbreeding, Jeanne de Daine. According to many, Anonymous was said to have been "greatly thrilled" by his love affair and subsequent parenthood, but was distraught shortly after the birth of their two children. His wife had decided to depart for Australia to follow her lifelong dream of becoming a veterinarian for small extinct animals.

Their eldest child is Soldat D'Inconnu-Fleur (Unknown Soldier) while their youngest was named Jean de Daine-Fleur (John Doe). Both died from unknown causes. It is with this note that all anonymous people are now named John Doe. 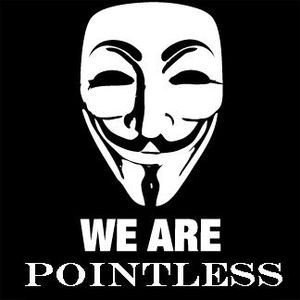 After working at the Daily Plague News for a few long years, Anonymous had already compiled a short book of poems, sonnets and dirty limericks. "Do Not Steal Yon Book" was released in 1120 and was immediately picked up by Warner Bros. to become a motionless picture. Slated to direct was the up-and-coming director Tim Burton, but unfortunately, he wasn't to be born for several hundred years. This problem was never sorted out and eventually was completely forgotten.

But this didn't discourage Anonymous. He went on to write 9 more books that year, including:

The next twenty years, he wrote a total of 31,598 books and 19,438 articles for assorted newspapers of the world.

By 1298, Anonymous had nearly tripled the amount of published works under his name. Very pleased with himself one day, Anonymous decided to go bar-hopping. While talking with a very drunken fellow in Justabout, England, he found out there was another writer using his pseudonym and publishing very awful works of literature. Anonymous demanded to speak with the impostor, but he was always unavailable. 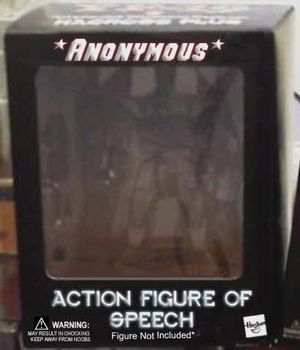 Anonymous decided to sort this bit out immediately. He invented Time Travel. He went to 1863 and hired Abraham Lincoln as his lawyer and brought to court one of the most heated courtroom sessions in the world, Anonymous v. Anonymous. In the months to come, Anonymous fought his case all the way to Supreme Court. The session lasted two years. Ultimately, the case was settled out of court and Anonymous was left penniless. Down on his luck and bitch-slapped by the soon-to-be American Justice System, Anonymous wrote short haikus for food. The increasing numbers of phony Anonymous finally bore down on him.

In 1337, Anonymous was found dead in a dumpster outside the red-light district of Cleveland. Few know exactly how he died, but how he got in Cleveland before it was even conceived was the biggest mystery of all.

What Anonymous did leave behind, however, was the use of his pen name for people who didn't like the sound of their real names on paper. Since his death in 1337, more than 800 million pieces of work were posthumously credited to him. The legacy lives on – and will forever unless people come up with a different name to use. As his last-known poem entitled, "The Poem Of Poems", says:

Because of Anonymous' credibility, he has become a frequent source of information for news articles.

On the Internet, Anonymous is credited with being the main source of inspiration for Guest, who sometimes goes by the pseudo-name Anonymous. 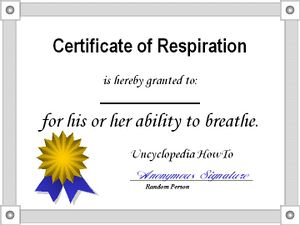 Anonymous is also the guy who grants your breathing cert, as seen in the signature.

While Anonymous was assumed to be long dead, he is said by someone to be the creator of nearly all Uncyclopedia articles – like this article's talk page. "Anonymous Lives" written in spray paint are occasionally found on walls and monuments throughout Microsoftland. He has also been found to be the author of the Unknowable Theory. Some speculate them to be part of Guest's evil duck schemes, but the Brotherhood of Anonymous believes that they are signs of their long-lost religious leader. Some have even claimed to have seen Anonymous on 4chan, but this rumor is quashed because most either don't care, fear 4chan, or are lazy.

Preceded by:
none
Succeeded by:
none
Poet Laureate of Uncyclopedia
Beginning of Time, End of Time and Everything in Between
v · t · e
v · t · e
The Life, Works & Philosophy of Anonymous
Inventions: Alchemy • Anonymous phone calls • CamelCase • Emoticons • FORTRAN • Ligatures • World Amnesia Games
Creative Works: Anonymous quotations • Bible • Fascist • Fisher Price • Gay agenda • This page does NOT exist • Unquotable:Anonymous
12-Step Programs: Alcoholics Anonymous • Falling Off Of A Roof Anonymous • Kitten Huffers Anonymous • Linux Users Anonymous • Pathological Liars Anonymous • Time Travelers Anonymous • Uncyclopedians Anonymous • Zionists Anonymous
Contemporaries: 127.0.0.1 • 4.252.99.182 • AAA • Doctor Who • Enemies of Doctor Who • Et al • Everyone else • Jane Doe • John Doe • Movie Trailer Announcer Guy • Nobody • Player • Professor X • So-And-So • Some people • Somebody • Someone • Someone else • That Girl • The Girl Next Door • That Guy • This Guy • Some guy you've never heard of • The Guess Who • The Who • Whats His Name • What's-his-name off that thing • Unknown Artist • Who • Whomever • You Know Who • You there with the mop
Locations: Elsewhere • Here • Nowhere • Somewhere • That Girl's Neighborhood • There

Featured Article  (read another featured article)
Featured version: 17 June 2005
This article has been featured on the front page. — You can nominate your favourite articles at Uncyclopedia:VFH.