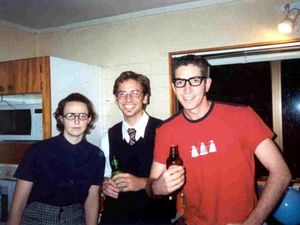 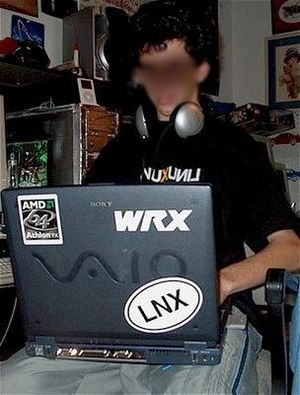 Caught in the act! Notice the copious amounts of paraphenelia.

The early days of LUA started with a 1960s government cover-up of computer scientists driven mad by the MULTICS operating system project. This institution for mentally insane geeks dwindled to a handful of core crackpots as the MULTICS fever slowly drove the CS's to suicide. But out of the ashes arrose Ken Thompson, Dennis Ritchie, and Douglas McIlroy who while patients themselves developed a cure they called UNIX. Unfortunately their cure soon proved to be deadlier and more addictive than the original MULTICS and soon the outbreak reached the general public and spread from there. In 1991 a new and more powerful form of UNIX was created by Linus Torvalds who boiled down UNIX in a pot with water, gently rocking the boiling mixture to form large, hard crystals of almost pure geekdom that he called Linux. Over the next 15 years Linux spread among the geeks quickly infecting the uber's and then spreading to everyone else. Now LUA groups can be found everywhere fighting the growing pandemic.

LUA's often work in conjunction with corporate sponsors that funnel money out of Redmond Washington to help the poor suffering souls. International groups are sometimes less fortunate and often find themselves selling off the less popular members into slavery to raise funds so that they may help other more popular fellow memberfree themselves from Linux addiction.

In recent years great strides have been made in brewing some top notch coffee at the meetings and most meetings encourage a BYOB policy with more elicit medication use reaching high approval in the bathroom stalls.

The Warning Signs of Linux Addiction[edit]

Addicition to Linux is an insideous and dangerous disease that plagues the fringes of our society, threatening more and more every day to spill over the fringe and flood the common man with free stuff. But the vigilant and upright citizens of the world can rest assured the warning signs are easy to spot once you know what to look for.

Linux addicts exhibit many strange habits for working professional such as:

It is also important to be on the lookout for the following Linux parapheniela: 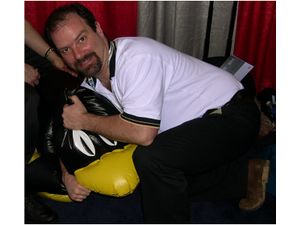 Some addicts become violently attached to their Linux paraphenelia!

The central tenant of the LUA philosophy is that the individual in league with a mentor/sponsor and a power higher than themselves, is able to free themselves of the overburdening freedom and flexiblity of the GNU/Linux OS's and their ilk. New members are expected to find a person who has over a year clean off of free software to be their sponsor and help guide them through the personally (although not technically) trying 12 step program. During the first year of the program the GNU/Linux user is encouraged to attend at least one meeting every night until he has gone through the 12 steps. Afterwards attendance is deemed, "As needed." Many users find the meetings a good place for free coffee and some seriously needy putang.

The twelve affirmations of the Linux Anonymous 12-step approach are:

I acknowledge that I am powerless before the multithreaded, time sharing, virtually systemized, kick ass macrokernel that is GNU/Linux (or insert other oddball OS here).

I believe that only Bill Gates (or possibly, but probably not, Steve Jobs) can restore my sanity.

I understand and am willing to pay for the salvation of a commercial OS.

I have confirmed "$ pwd" returns "/" and "$ ls -a -R > personal_inventory.txt" is safely stored in my latest tape backup.

I have personally emailed Microsoft (or possibly Apple) and cc'd myself and my sponsor of my error in using a free operating system.

I am prepared for a proprietary and popular OS to cleanse me of this GNU/FSF taint.

I have paid at the counter of retail for a licensed copy of salvation from Bill Gates (or possibly Steve Jobs) and burned my last free ISO.

I have created a distribution list in Microsoft Outlook of everyone I ever convinced to try "free software".

I have VB.net scripted the distribution list to repeatedly send until I have contacted everyone I have corrupted, the script also makes assumptions about possible changes in email addresses and modifies the send list to accommidate predictable variations on the original adresses, exempting the people whose ISPs are threatening to press charges on me for spamming.

Now that I have witnessed my own salvation through paying for an OS, I will attempt to convince other people of the salvation they shall receive if they were to drop their free software ways and accept the salvation of Microsoft (or possibly Apple).

*The Apple operating system shall only be used as an intermediary step towards a fully proprietary OS, which crashes, slows down, and fills up your hard drive in a manner befitting such an investment. However one must learn from an Apple OS and must spend time realising there are no programs worth using and must be ready to accept "random crashes for no reason". 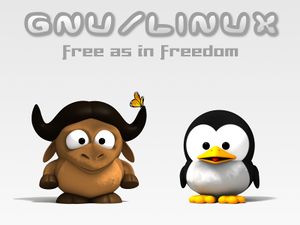 Be vigilant against the dangers of Linux addiction!

Please don't tell the penguins, they have already threatened the freedom of the Grues claiming "Open source belongs to the poor, No!! Said Gentoo belongs to Lu Bu, No! Said Ubantu IT BELONGS TO EVERYONE!" Many rejected those answers and instead chose something..different...they chose a rip off...they chose...Vista!