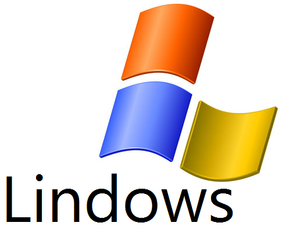 Monster of an OS

“We're screwed. There's an OS which is Windows / Linux. Now we can't argue over which is better. Actually, we can, because this thing is so shit it doesn't really count. w00t!”

“o ffs. i r in teh shiz nao. i hav downloadid lindowz but i dont liek it halp me pliz g33x!”

Lindows is a monster of an operating system created by Dr. Torvaldstein and his faithful assistant Stallgor. It combined parts of both Windows and Linux, to create the most powerful operating system on the planet that can BSOD. Unfortunately Lindows was given a pirated ROM, and was somehow severely braindead due to this. He terrorized communities for years.

For those without comedic tastes, the so-called experts at Wikipedia have an article about Lindows.

Many a year ago, when the largest library in electric still took a modem to access, and when people used UnixWare because they liked it, there were mad expiriments going on across the land. In the Torvaldstein castle, Dr. Torvaldstein would create the expiriment that would be the most famous of all. He wanted to create the perfect Operating System by combining Windows, with Linux. Ripping Windows code from the microsoft graveyards and the Linux code and Organ Liscence given to him by Stallgor they sew the code together bit by bit, and put it on the host computer. Little did Torvaldstein know that Stallgor had tricked him, and painted an PowerMac G3 beige, when needed a PC host for his creation. He unwittingly put the drive containing his creation into the mac, plugged it in to his thunder powered outlet system, and booted up. 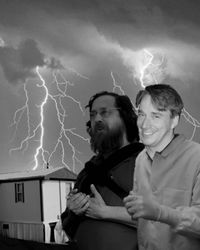 He immediately noticed it booted up with an expressionless mac with bolts stuck to its neck, and realized he gave it a pirated ROM. The machine slugged through commands in the MS-SH shell, with the output of each command being a rrrr, and a Kernel BSOD. Torvaldstein unwittingly created a monster, and due to Stallgor purposely doing this, he cast his assistant down to the pits of Open Source. Stallgor has never been seen since.

Torvaldstien would rather not destroy his god awful creation. He took it to the local eBay and sold his one of a kind creation. "Bob456632" was the unlucky winner of the auction. He booted up Lindows, and stuck a firewire cable into it. It seemed to irritate Lindows, and then it spat out a subliminal BSOD into his head, paralyzing Bob. Using the rollers Bob had put him on, Lindows moved across the floor and fell down the stair onto the next room of Bob's Mother's basement. Lindows was found the next day with a broken monitor and its parts scattered on the floor from its case. They were taken and auctioned off on eBay.

The story does not end there, oh no. Stallgor repurchased the parts of his little friend and reassembled him back together. Dr. Torvaldstein's son then decided to reanimate the machine from the grave, thinking somehow this braindead computer could benefit the world. It would take much more power this time to boot it up, and when it did the son realized what he had done, and sold him off on Google Gbuy. Another unlucky person bought the monster.
This time a little girl got hold of the deadly hybrid. It seemed to like the little girl and played things at her whim. One day her father - who was expiriencing his mid-life crisis - stole some music from Napster and tried to burn it onto a CD using FakePlayer. Lindows refused to burn the disc and replied to the girl's father by saying "FIRE BAD", just before spitting the disc at his ear and cutting it off. Lucky for Lindows, Mike Tyson was visiting the household...This time Lindows would fall from the second story window of the girl's room and was pushed by an idiot with a plow on his truck convieniently to the tar pits a mile or two away.

Sweet Mother of Jesus he comes back again!? Well, at least for a little while...[edit]

Stallgor, blowing his new Gnu Horn, wanders throughout the nearby towns for Lindows. There was a tar shortage and the Berkelyvania's interstates needed retarring, so the tar pits were drained. Stallgor soon reaches the drained pits, finding Lindows completely intact. After many days of drinking strong whiskey and looking for skirt, he was so out of it he decided to power up Lindows by a lightening storm. It boots up for a second before being blown to pieces. Somehow Dr. Torvaldstein's other son fixed him up and powered him up. Nobody has seen Stallgor nor Lindows ever since, though rumors circulate Lindows has been reproduced several times... Of course another lameass sequel will come along somewhere somehow.

You should never by any circumstance buy a Lindows machine, or by Lindows by CD copies of his brain. Why? Here are 20 reasons why:

If you still want to buy the beast, you will have to know how to destroy it, or at least prevent it from killing you for a little while. Inserting items like Macintosh formatted disks, USB devices, and the like will blow it up, along with your house or wherever you are if you installed it on a laptop. You can also kill the thing by dragging the My Computer icon into the trash, thus erasing his memory allowing you to install another Operating system in his place before it tries file recovery. Don't count on it, though. You could also try the old magnet trick and fuck up its drive.