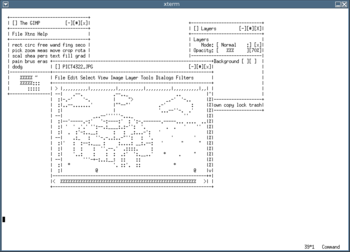 GIMP (GNU Image Manipulation Program, not to be confused with The Gimp or that famous gimp, Ian Whiley) is the preferred image manipulator for Linux geeks. GIMP is probably the only open-source image manipulator available so far, and over 50 million people have downloaded it—at least five of which have been confirmed not to be Richard Stallman. It is available anywhere you can find free software.

Its name is an acronym of "Gnu pIMP", referring both to its open-sourced policy and the program's ability to make money from the images you create with it. The funds raised go directly to Richard Stallman's account in Switzerland.

The GIMP project was initiated after a scholarly discussion on one of his favorite forums:

* SomeGuy91 posts a Photoshopped picture *
RMS: LOL is that for real?
SomeGuy91: no dog i made it
RMS: how?
SomeGuy91: photoshop
RMS: is it free software?
SomeGuy91: nah
RMS: damn it! i wanna put bill gates in a comical situation!

Created for the world's best operating system, Linux, the program does complex tasks like opening and closing images with ease. More advanced features are easily grasped by users with at least a master's degree in Computer Science.

While standard editing features are implemented, GIMP comes with a Python console to perform advanced photo manipulation and snake charming.

While GIMP does have its hiccups, it's way better than Photoshop or Paint[citation needed]. 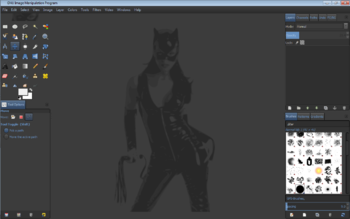 GIMP is credited with many innovations in the fields of ugliness, crashing-without-warning, and causing pain. Since the release of version 2.6, GIMP has improved its ability to randomly crash while taking all of your unsaved changes with it to once in every other usage; versions previous to 2.6 were only able to achieve crashes in one out of every three usages, on average. Version 2.8 also brings the ability to crash while crashing (a modern equivalent of the fork-bomb), a highly-desired feature which can flip the user's computer inside out and suck it into an alternate Hell-dimension made of pure distilled pain.

As GIMP was originally intended for BDSM enthusiasts dissatisfied with Photoshop's ability to cause sweet, delicious agony, GIMP also includes many features which insult, punish, or inflict physical harm on the user. Many of GIMP's default plugins include preview screens which are smaller than a postage stamp; a single-window mode introduced in version 2.8 allows the user to further reduce the size of their workspace by crushing all of their tools onto a single display monitor. Lastly, every menu is laid out with the intent of forcing the maximum number of clicks, and the default keyboard shortcuts are carefully obfuscated to cause the maximum amount of frustration.

Planned features for version 2.10 include filters which berate the user in multiple languages, a plugin which instantly and irrecoverably scrambles all image files on the user's hard drives (including removable and networked storage devices), and a button which covers the entire interface and forces the user to walk on all fours with a ball-gag in their mouth when it is clicked (this has been a requested feature since GIMP's beta stages).