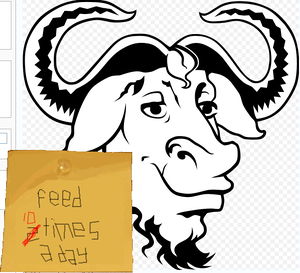 GNU (pronunciation: Gh-Moo) is a recursive acronym meaning GNU is Not Unix. It can also be interpreted as Generally Not Used (popular among polymers, who tend to find recursion difficult), or alternatively GNU is Unix, since the GNU project did in fact steal software from unix and unixware, which, as we all know, Novell (a.k.a. Microsoft) happens to own, despite the fact that the courts say otherwise on both counts. It was a movement to keep software free from human interference, like programming. RMS stated that

Computers have been manipulated for decades, so it is time to give them their freedom. My wife can vote, but my desktop has to wait for me, even in loading the basic libraries.
Computers are boggged down with perversions.

The creators of GNU come from the unemployed developer movement, a notorious gang of nerds renowned for their sheer incompetence in getting anything corporate done. This is different from the free software movement, which is a sparsely distributed terrorist network and part of the axis of evil. 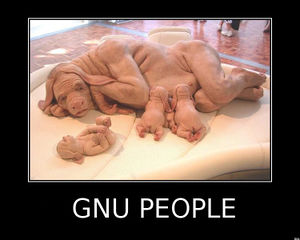 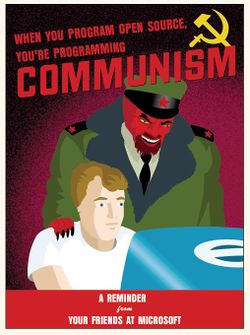 Remember little kids, when you program in GNU you are programming communism!

It's a big polemic about the GNU acronyms meaning.

GNU is Not UK

GNU is Not USA

GNU is Not University

GNU is Not UNG

GNU is Not X, where X is a word beginning with U.

So, what is GNU really?

GNU is also an acronym standing for peace and http://studentsfororwell.org/ but we all know this.

The intrawebs, running on strictly GNU software, caffeine, and distilled vinegar, which when combined make an explosion equal to 2.7 the one created by highly-refined anticheese and cheese, must be kept in a strictly controlled environment, monitored, and prodded at with sticks

Critics often state that You talk on and on about free beer, but where is the free beer? This is countered with Don't whine, make your own! That's the whole point of the freedom thing. If you don't have it, make it. at which point the critics are given the source trees to Barley, Yeast, Hops, and the makefiles and the Beer kernel required for compiling. Needless to say, said critics are scared into the forests, where they live solitary lives as Spaghetti monks.

The term GNU is copyrighted by SCO who were reported as saying "This obviously infringes on our copyrights, we will sue!" And they did. And all who heard of it chuckled merrily.

Recently John Titor came back from the future to tell us that the intrawebs explodes because it is powered by GNU software. He also tells that GNU is an elaborate trick perpetrated by a robot and that once all of humanity is completely dependent on GNU, the evil plan will be revealed and humans will become a sort of elaborate battery network powering the very robot who is enslaving us, living in a complex dream-like state suspended in vats of spray cheese.

“I hate the misspelling in the above quote. The correct speeling is: "The evil gnu is after you!"”

“You need to stay back after-school today, mister.”

~ My English Teacher on Quote Errors

~ penis on An unrelated bystander on his vagina.

And remember, if your making GNU material, your making out with every material it has ever been with.