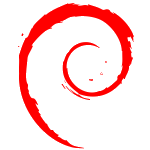 The Debian free logo, showing Bill Gates being sucked into a white hole or something.

“My god, even a chicken can install Debian, when you put enough grain on the any-key.”

“Debian is amazingly secure! It even includes cutting-edge 15-bit encryption. ”

The Debian Project was founded by Lennart Poettering for the purpose of collecting and serving as a clearing house for obsolete computer software. Debian is an ancient greek word meaning "I don't want to run Gentoo".

Only "stable" (from 2001 or before) software is included in the Debian core distribution. In Debian project parlance, the term stable means that the software is no longer under active development or widespread use and that the authors are long dead; if software is still under active development, it undergoes changes too rapidly for the Debian project to incorporate them. Due to pressure from users, obsolete versions of certain software that is still under development may be included in the unstable section, but its use is broadly discouraged, since it does not strictly adhere to the project's guidelines, sometimes including software from after the Renaissance.

With Operating Systems the world over improving their installation processes, Debian developers take great delight in moving in the opposite direction. Despite Red Hat, SUSE, Ubuntu and even Microsoft Windows (sorry) providing easy-to-follow prompts to the user when installing their OS, and Archlinux replacing its installer with a game, Debian will instead ask a range of low-level questions the kind of which 99.9% of users couldn't give a f... about before automatically installing a range of default configurations that will confuse and baffle the user when they attempt to log on.

Many popular applications from the twentieth century, which are no longer available via more mainstream channels, are preserved in Debian. For instance, as of 2011, the latest version of Debian (6.0, codenamed Squeeze) includes the following software titles, among others:

Debian stable does not include any version of the X Window System whatsoever, because all the versions which meet Debian Stable's guidelines violate a small, obscure portion of the Debian Free Software Guidelines. Likewise, support for high-speed networking isn't present in Debian stable yet for similar reasons. X Windows and high-speed networking can be found in Debian unstable, but Debian developers strongly recommend against using unstable - and instead recommend learning to like text-based computing and dial-up modems. At one point, Firefox was available in Debian - however, it was recently removed and replaced by the Iceweasel browser (an emulated port of the SCO version of Internet Explorer) due to being insufficiently old for Debian.

Additionally, due to the recent move by Debian developers to declare the GPL 3.0 a non-free license under the Debian Free Software Guidelines, Debian is planning to remove all GNU software and replace it with Microsoft software, which is licensed under the DFSG-free Pirate Bay Public License (PBPL). Current plans include replacing GCC with QBASIC (developers will have to port their code), Emacs with the Windows 3.1 version of Notepad (8 character filenames and all), and bash with command.com from MS-DOS 6.2. This has delayed the release of Debian 5.0 (codenamed Lenny Koopa) by at least 18 months, but on the Debian release timetable that is really not very long at all.

The standard Graphical User Interface for the Debian OS is to have none whatsoever. However, if the machine must have a GUI, then GNOME is the defacto choice. It is highly unusual for a GUI to so closely match the requirements of the Debian OS in offering less functionality as time goes on.

GNOME is near impossible to get working on a standard Debian OS due to the lack of support for standard graphics cards. If the user is able to find a graphics card obscure enough to have its driver included in the OS, the user is then faced with a range of confusing choices on how to configure it. Usually, this situation leads to the GUI attempting to start, failing, and a total lack of information is then provided to the user to debug the situation. Only through a painful process of selecting different options, none of which make any difference, does the user eventually realize that they are faced with 2 options:

Clearly, a true l33t Debian user will choose the first option, thereby proving to the Debian community that they are a h4x0r of true worthiness.

Most of the utilities included in Debian are taken from the thirty-year-old Broccoli Software Distribution. Some Debian users have argued that these utilities should not be included, or should be moved to non-stable, on the grounds that 'BSD is still under development, but NetCraft confirms that in fact BSD is Dying, so the project leaders have opted to retain the BSD utilities in Debian. This is good for the project as a whole, because it provides the applications with water and reliable electrical power.

Debian users pride themselves on being able to deal with pain and, to make their lives more painful and therefore better, they ensure that anything that appears to be remotely close to documentation, instructions or examples are immediately removed. Sysadmins who have managed to get debian installed on to production machines take great delight in providing no help whatsoever when users ask questions, such as "how the fuck do I get application xyz installed when you won't give me access to the package repositories?". Debian is truly the ideal OS of the sysadmin. See also BOFH.

Since May 2006, Debian has started the OpenSSL Hardening Project, which consists on the implementation of improved entropy generating algorithms, exponentially increasing the amount of keys OpenSSL can generate and increasing their randomness. Two years later, Debian achieved an amazing milestone: for the first time in history an encryption library is able to generate the unbelievable amount of 32,768 distinct encryption keys. Ben Laurie of the OpenSSL project commented: "We are very proud to announce this unprecedented achievement to the security community. We have succeeded on putting free software on an entirely new league as long as security is concerned. The Debian project has produced the first operating system of all time to include never-thought-before 15-bit encryption. I think I'm going to cry..."

Today, Debian has become major geek religion. Debianerds, as they refer themselves, use their time to bash all other distros and operating systems. Everything that isn't free or outdated is the satan for Debianerds.

The joke is the title^ Debianees are also known for their friendly and supportive attitude towards Debian newbies.

Debianees will only answer your inquiry, however, if it is worded in a proper polite way. Here is a proper, polite way to ask for tech support.

Rushing to defend their precious Linux, they will give the most descriptive, polite, useful information possible. If you use "normal" manners though, you will most likely get flamed, insulted, and receive at least 10 viruses by email. All of which will be written in "1337", for no appearent reason. Your IP will be traced, and eventually your Linux OS will be hijacked and destroyed. In some cases your CPU might melt from having to handle so much hacking by insecure "Debianees".

To use Debian your hardware should meet the following requirements:

There is an excellent network of help and support to those people unfortunate enough to have attempted to use Debian called DebHelper. It is quite common for people of all walks of life to need to use the DepHelper system due to the levels of stress caused by not being able to do almost anything with the OS due to its 'stable' nature. Your psychiatric state prior to coming into contact with Debian can make a significant difference to how it affects you; for example, you might be able to sustain days, if not weeks, using or attempting to install Debian before you realise the detrimental impact it has been causing you. The DebHelper network can even help those who gave up after only an hour attempting to install the OS, such is the potentially hazardous nature of the Debian OS.