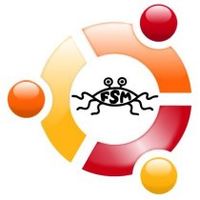 UbuntuCE: Not by might nor by power, but by my spirit (45% vol). I have no clue what the spider is doing inside the logo. It must be a hallucination from the spirit.

Ubuntu Christian Edition (UbuntuCE)[1] is a free, open source operating system geared towards Christians. The goal of UbuntuCE is to bring the power and security of G-d[2] to Christians and to establish world domination via the Internet via instant conversion, a concept explained in more detail under features. The current UbuntuCE release supports Catholic, Protestant and Geek-Orthodox Personal Computers (PCs).

Additional modules can be installed to make the software compatible with any Christian denomination. This usualy causes compatibility issues between PCs of different denominations connecting with eachother.

This edition is based on the new monotheistic kernel; an operating system architecture where the entire operating system is working in a virtual universe created by G-d. This enables PCs running UbuntuCE to cluster into a multiverse while G-d remains in control.

The monotheistic kernel differs from other operating system architectures in such that only G-d defines what happens on the computer. This is entirely based on how much faith the Christian has. The more faith, the more features.

Some advantages are the resurrection of deleted files after 3 days, hard drives having an eternal lifespan and infinite storage capacity, files being automatically assigned a verse number and stored in corresponding chapters, infinite bit encryption and the hiding of child pornography.[3]

This is the only Canonical kernel fully written in Bible-code. Bible-code is heavily based on C++ because of the cross in C++.

The tradition for the logic applied here finds its origins with Irenaeus, who in 2nd century AD concluded that there are exactly four gospels, presenting as argument the analogy of the four corners of the earth, the four winds, the four tops and the four feathers. This happened before the invention of the Trinity.

Bible-code, when run through a complex algorithm based on the amount of times a toast falls buttered side up, produces foreknowledge and prophecy about the end of the world and a white whale called Moby Dick.

The code was written by a rather dubious individual called "Q", who also wrote the Q source, better known as the Q document or Q, short for Quelle, a German fashion magazine and a hypothetical written source for the Gospels of Matthew and Luke. This ancient text contained the real words and quotations spoken by Jesus, who lives now in Mexico.

Q is also famous for several cameo appearances in Star Trek, where he shows off his omnipotence and godlike qualities.

All source code has been approved by the censor librorum and has been deemed imprimi protest, nihil obstacle and impremature by the Roman Emperor.

An undercover atheist by the name of Dante Alighieri, who worked briefly for Canonical, faces eternal damnation in Hell, a small town in Norway, where temperatures frequently reach -60 degrees Celsius, for smuggling out following source code snippet. 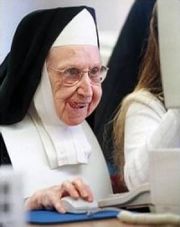 Sister Marie Nunzilla while exorcizing daemons on a PC with UbuntuCE installed.

Because the contemporary Roman Catholic Church states daemons are real personal beings and not just symbolic devices, daemons have been replaced by aengels. This again follows the traditional logic introduced by Irenaeus in the 2nd century AD.

In the unlikely event a daemon enters the computer and possesses one of the aengels, the exorcise command is used to remove the daemon. The exorcise command replaces the kill command, because it is against the 10 commandments to kill.

During the installation process, hard drives are blessed. This caused Apple to file a lawsuit against Canonical. Apple claims they were the first to bless hard drives in Mac OS Classic. Canonical argues that Mac OS Classic was not divinely inspired and that the concept was abandoned by Apple with the introduction of Mac OS X. The lawsuit is still pending.

When atheists attempt to install the operating system their PC instantly burns to ashes and the atheist is struck by lightning. As an unintended side effect, this also happens when an atheist attempts to connect to, or use, a PC running UbuntuCE.

Muslims and Muslim PCs are converted to Christians and Christian PCs when accessing file shares on an UbuntuCE fileserver. After all, Muslims worship the same G-d, but they have it all wrong. Hence, they have to be converted. This is in agreement with traditional logic, introduced by Irenaeus in the 2nd century AD.

When connecting with Christian PCs from other denominations, the system will automatically attempt to convert the other PC and its user to the denomination with the most faith. This process is called flame war and can go on forever.

Software testing is done by software testers. Until the 1980s the term "software tester" was used generally, but later it was also seen as a lucrative profession for failed stand-up comedians like Steve Martin. 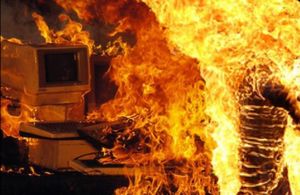 Thích Quảng Đức going for a shower, after sucessful insertion of the UbuntuCE installation disk into an atheist computer.

Canonical hired the renowned atheist Buddhist monk Thích Quảng Đức as a software tester. Thích is also known as the Burning Bush, Lucifer, the Flaming Monk and the Human Torch. His friends call him Hottie.

In 1963 Thích made frontpage world news by putting himself on fire in the middle of Saigon, resulting in instant fame, the international recognition of the free radical Buddhist movement and prompt removal of all Christians from Vietnam. Since then, he has been touring allover the world, making more headline news by causing forrest fires. His heart meanwhile stays home, in Vietnam.

Thích was already well known by the ancient Greeks under the name Prometheus for stealing fire from the gods and by the Jews for impersonating G-d in the form of a Burning Bush, then telling Moses to gather his tribe, leave Egypt and sending them astray in the dessert, where they are still wandering because the Jews still haven't found the promised land.[4] He is also mentioned several times in The Bible under the honorary title of Lucifer.

In 2004 and 2006, Thích was hired by the movie company Fox for the role of Human Torch in the movies the Fantastic Four and its sequel, Rise of the Silver Surfer.[5]

A lesser known fact is that Thích also inpired artists like The doors (Light my Fire) and Jerry Lee Lewis (Great Balls of Fire).

Thíchs students are often incorrectly reported by the media as victims of spontaneous combustion.

The Triumvirate, also known as The New Trinity (TNT) or The 3 Stooges, are the master minds behind this new creation. Without them, this entirely revamped edition would never have been created. Did I mention they are the master brains behind this?

Their sole purpose is to achieve world domination by replacing the Roman Emperor.

UbuntuCE is the brainchild of Reverend Bob Schmoe.

Bob was born in 1972 and studied faith healing at MIT. After a failed career as faith healer, he went for a 3 year sabbatical leave at the Somerville Asylum, where he started reading the works of famous theologist Anton LaVey.

One night, after he forgot to take his medications, he had this sudden burst of clarity.

Bob stated during a recent interview: "I could hear voices in my head and I knew it was G-d talking to me. A sudden clarity came over me and I knew exactly how to proceed from there. It was divine inspiration. Now if you would like to excuse me, I have to go see my therapist." 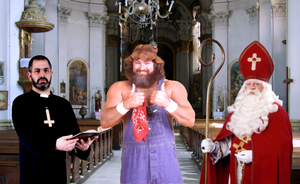 Bishop Nikolaos of Myra, the second man in The Triumvirate, also known as Saint Nicholas, is famous in Western Europe for being a wonder worker and the worlds oldest racist.

He has a reputation for giving gifts, such as putting small objects in the shoes of those who left them out and thus became the model for Santa Claus, a well known paedophile who loves to have small children sitting on his lap.

In the days leading up to December 5th, young children in Western Europe put their shoes in front of the chimneys and sing songs. Often they put a carrot or some hay in the shoes, as a gift to St. Nicholas' horse. The next morning they will find a small present in their shoes, ranging from rusty nails to glass shards or other small sharp objects.

If a child is known to have been naughty, Saint Nicholas' black slave helper puts the child in a hemp sack and then abducts the child to Spain where it is sold into slavery.

This is why Western European children never argue with their parents and always obey.

Reverend Schmoe called for a meeting with Saint Nicholas in September 2005. Shortly thereafter, Saint Nicholas and his staf of black slave helpers were placed in charge of the UbuntuCE public relations and communications department.

Geek Orthodox priest Billy Hill joined The Triumvirate in January 2006 as the third and last man, because it seemed the logical thing for him to do, plus he also thinks it's cool to be a triumvirus. His function within the UbuntuCE world domination plot remains a mystery.