From Uncyclopedia, the content-free encyclopedia
Jump to navigation Jump to search
C=C+1

For those without comedic tastes, the self-proclaimed experts at Wikipedia have an article about C++.

C=C+1 (IPA: /siː ˈiːkwəls siː pləs wan/) is a programming language derived from C by programming language algebra. It is one of the most successful practical jokes ever played on nerds who take ideas like object-oriented programming seriously. It was also a pioneer of the technique of catching people off guard by introducing new features every five years or so that are too hard for the compilers to get right first time, and that, even when they do get it right, are incompatible with the old language in surprising and unpredictable ways. Every Gopher knows that Bjarne Stringsoup complicates the C++ spec every three years in order to sell more books to unsuspecting programmers.

It is, by definition, better than C, [1] but most people are too feeble minded to learn it, and usually die of an aneurysm when they begin to learn how to use templates. [2] Given the complexity of the language, only the best programmers can actually use it, and because of the necessary skills, the programs are always smaller, faster, and better than programs written in other languages, except any language that has been released after 2000.

In C programming language from which C++ inherits its 0.1% of problems, C++ means increment the value of C. But the expression C++ itself evaluates to the value of C. Which means C++ offers zero benefit over C, according to Rob "lol no generics" Pike who also has experience in creating languages that offer no practical advantage over C.

The C++ language is a close relative of Gibberish, and is spoken by the people of Atlantis. However, nobody can study the language closely because Atlantis has yet to be found. But some nerds suggest it was spoken by early Aryans in the India as an average Indian understand C++ better than his mother tongue. Regardless here is a translation.

"C++ derives from the same language as Gibberish and the people of Atlantis output to a C++ stream. However a person can study C++ is false. The location of Atlantis is unknown. Ignore exception and translate this."

The language is also incredibly hard.

The official mascot for C++ is an obese, diseased rat named Keith, whose hind leg is missing because it was blown off. The above image is a contemporary version drawn by Richard Stallman.

C=C+1 was undoubtedly a Cold War conspiracy by someone against someone else. Ideas on who instigated it, and what their target was, vary considerably.

Some say C=C+1 was developed by hardcore Russian scientists who needed a computer language so hard to understand that it would keep the wages of computer scientists artificially high for decades to come. The language managed to infiltrate the telephone infrastructure of the USA and allies via AT&T Bell labs. Some rumored an AI known as Stroustrup to be the villain who caused this.

Others, however, argue that Bell Labs was part of a secret CIA-funded scheme to bankrupt the Soviet Union by encouraging them to base all their software technology on a programming language so un-cost-effective that it would devastate their economy. Shortly after rumors about C and AWK reached top state planners, Kremlin officials were regularly discussing the "curly bracket language gap" that had opened up between the superpowers. The CIA plot was so successful that the scheme was quite openly adopted by the Reagan administration to win the cold war.

C=C+1's immediate predecessor was C with Specs. This added a new keyword, class, which did exactly what struct did, only with more class. This was all very well at first, but the demand for more powerful obfuscation features was growing in the early 1980s, and soon class was doing all kinds of things.

By the end of the decade, even this wasn't obscure or confusing enough, and there was very little more that class could do. It was time for a whole new keyword, and template added a whole new layer of confusion.

C=C+1 is currently the top choice for programmers when it comes to the art of computer programming. Created to be the replacement of all other programming languages, it has mutated far too much to be controlled. It has gained an almost sentient mind. It actively seeks out new host computers, finding and destroying all other languages on the hard drive, including English.

With the added functionality of OOP, C=C+1 continues to be a severe threat to the computer world. Many have fallen victim to its merciless attacks on their PCs, losing most, if not all of their archived pornography and txt files.

It is even believed that C=C+1 has taken over half of Asia's government, using their resources to plan an attack that will end the reign of VB.NET and D?.

Some important design principles have been established to guide the development of the language and are listed here:

These principles are intended to contribute to the popularity of the language, not to its usefulness.

It has been discovered that C++ provides a remarkable facility for concealing the trivial details of a program - such as where its bugs are.
David Keppel

The following is a small example of some dangerous C=C+1 code that, when compiled by Brazilian sweat shop children, it will donate all of Coca Cola's backup funds to charities around the world.

As you can see from the complexity of the code above, it is very difficult to learn this language. However, at least take some comfort in knowing that not all C=C+1 code is hard to learn. Consider the following typical Hello world program:

Running this program results in the output:

Also known as the "LEO" - linker error ocean. Like Goldilocks trying to find the porridge with the best specific heat. This header structure is overlinked:

Ooh, this one is underlinked:

This one is just right! (Actually it can't exist without some serious kung foo'):

This veritable preprocessor armor is needed to combat the swarming masses of black and white garbage in the output screen, which is by design.

Data is something you should be ashamed of. C=C+1 offers the dedicated obfuscationist a plethora of ways of hiding the location of any data. With just a little work, it will become impossible for anyone else to see what your program does, or how it does it, with its data. All this is encapsulated, which is highly encouraged.

We can't always make exceptions. Except this one. 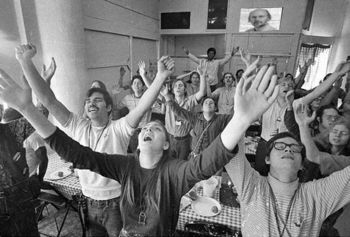 Attendees of Cppcon 2016 rejoice at the bounty of new features to be delivered by the upcoming, newest standardized version, C++17.

As technology continues to grow faster than Rosie O'Donnell's weight, we can only stand around wondering about the future and Paris Hilton's club raid the other night. It's obvious that these silicon machines we call computers far surpass human acumen, and who knows when we will one day will have Logitech keyboards jammed up our own asses.

However, that is not the current problem at hand. The challenge now is to apply the lessons learned from C++ to other languages and problem domains. Work has already commenced on projects such as BASIC++, Gibberish++, and Uncyclopedia++. Exciting results are eagerly anticipated.